Final Harry Potter film wraps up amid excitement and relief 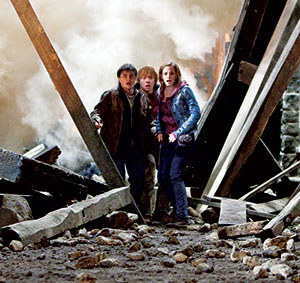 Harry Potter and the Deathly Hallows––Part 2 premieres in theaters July 15. The plot of the films and books have caused a difference of opinions.

For Greg Travis, a sophomore early childhood education major at Mount Vernon Nazarene University, excitement for the last film is in anticipation for Harry Potter finally being over.

“I find all the Harry Potter hype to be annoying,” Travis said. “I think it’s weird that this many people all over the world get excited about a series that promotes witchcraft.”

Travis is one of a growing group of people who dislike the Harry Potter books and films.

The home page of the group quotes Deuteronomy 18: 9-12: “There shall not be found among you anyone who makes his son or daughter pass through the fire, one who uses divination, one who practices witchcraft, or one who interprets omens, or a sorcerer, or one who casts a spell, or a medium, or a spiritist, or one who calls up the dead.”

One member of the group wrote, “Harry Potter makes children have an interest in witchcraft, and that is a problem.”

Travis said he has not read the books, but he has seen the movies and agrees that Harry Potter promotes satanic ideas to children.

“I think that Harry Potter gets taken too literally, and people take it too far,” Travis said. “You have kids running around with wands casting ‘death spells,’ and no one sees anything wrong with it. The Bible says that it’s a sin to believe in witchcraft and fortune tellers, and since Harry Potter promotes these sins to little kids, I can’t help but be against it.”

Wilbur Bagley, permanent deacon at St. Joseph Catholic Church in Canton, said there’s nothing wrong with fantasy stories as long as parents remind their children that the stories are not real.

“Because the Harry Potter series attracts children, parents should exercise caution,” Bagley said. “Parents should read the books and see the movies, and then when the children start to ask questions, the parents can be there to guide them in the right direction.”

Bagley said he thinks it’s good for young people to explore different stories as long as they know that the stories are figurative.

“Harry Potter is allegorical and not meant to be taken literally,” Bagley said. “The story is more about the choice between good and evil and how evil is contagious, and if left unchecked, it can kill our souls.”

Carpenter, Travis and Bagley prove the books and films are often interpreted differently.

“Anyone who reads Harry Potter knows that it’s about love, friendship and treating people well, as if they were your brother,” Carpenter said.

Carpenter said he has learned a lot from the stories and people can learn good morals just from reading the books or watching the films.

“People need to read the books more carefully,” Carpenter said. “When Dumbledore dies, he casts a spell of love over everyone. Then, Lupin has to be the best man ever because of his ability to give and love people.”

Carpenter, along with many others, thinks that the last movie is not the end of Harry Potter.

“Harry Potter is like The Beatles,” Carpenter said. “The fans are incredibly resilient; it’s a huge culture and it will never die. I can’t wait to see what comes next.”

Erika Kerr is a Summer Kent Stater reporter. Contact her at [email protected]