Provost Frank to step down, seek other career goals 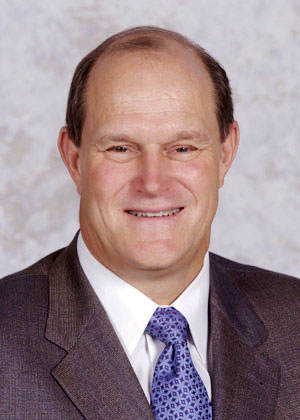 Provost Robert Frank announced plans to step down as provost and university vice president after the 2011-2012 academic school year in an email to the Kent State community.

“At age 59, you tend to reassess your priorities, and I’ve long dreamed of being a college president,” Frank said in the email. “Realistically, I’ve one career move left, and now’s the time to make it.”

Since becoming provost in March 2007, Frank has helped implement programs to increase the university’s retention rate. The Math Emporium — which is expected to be complete by the beginning of the Fall 2011 semester — and the Graduation Planning System (GPS) are two of the initiatives put in place to help with retention.

“We’ve made huge progress on systems to support undergraduate education, and how students move through the university and get feedback on what they need to do in order to graduate,” Frank said. “We’ve always said that when you’re admitted to Kent State, we want you to become a graduate of Kent State and we’ve always tried to honor that commitment.”

“Dr. Frank has accomplished much,” Lefton said in an email. “He was instrumental in the development of the university’s new College of Public Health and served as its interim dean. He has helped forge international strategic partnerships in countries including China, India and Saudi Arabia and supported study abroad opportunities as well as recruitment efforts to draw more international students to Kent State.”

Frank admitted he has had ups and downs since he became provost. His relationship with faculty, he said, is not always the best, but the progress of the university depends on faculty involvement.

“There have been moments that aren’t so good, like any family or group,” Frank said. “We may get together on some days and not like each other, but the bottom line is you don’t get these things done if you don’t have an ability to work together. The university doesn’t improve unless the faculty is engaged.”

Kara Robinson, president of the tenure-track unit of the Kent State chapter of the American Association of University Professors, said the relationship between the provost and the faculty is not always perfect.

“I think he’s been a very strong provost; he has a vision,” Robinson said. “If there were a perception of friction, it could have been what faculty may perceive as an unwillingness to listen. Part of his responsibility is the faculty. Sometimes that relationship has been bumpy because there’s not a complete eye-to-eye agreement.”

Robinson said she thinks the programs that have been implemented so far will improve the university but could have been handled differently.

“For me personally, I think that the goals to grow the university for good was more hurried instead of taking a consensus to evaluate,” she said.

Robinson said she wasn’t willing to elaborate on specific programs she felt were applied too soon.

Frank said the university always has room for improvement, and it continues to make progress in different areas.

“Over time we would like to have better graduate and undergraduate students on our campus to improve the university’s credentials,” Frank said. “We’ve been slowly improving the scores of our students and their GPAs. We would like to continue that and have higher performing students over time.”

In his last year at Kent State, Frank said he still has goals he hopes to reach by the end of the academic year.

“I think the biggest thing that remains to do is more work on graduate education — around reviewing our standards for graduate education,” Frank said. “We’ll review how we get information to deans and chairs of departments, about who the students are who are applying on a graduate level.”

Though he doesn’t have exact career plans after next year, Frank said now is the best time to push himself to accomplish his next career goal of becoming a university president.

“These things are calendar driven, so in the fall people will start announcing that they’re looking for a president,” Frank said. “I could have looked around to try to find a job. But the truth is, when you do that you’re very conservative in how you look. You wait for the perfect job at the perfect moment in the perfect city. This will push me to take more chances. It’s a risk deal in keeping one’s self in mind. I’m wide open.”

Timothy Chandler, senior associate provost, said he is not sure if he will apply for the provost position once a national search is launched.

“I haven’t given it a great deal of thought. The position has not been advertised, but I’m sure there will be a national search soon,” said Chandler. “When the job is posted, I’ll think about it then.”