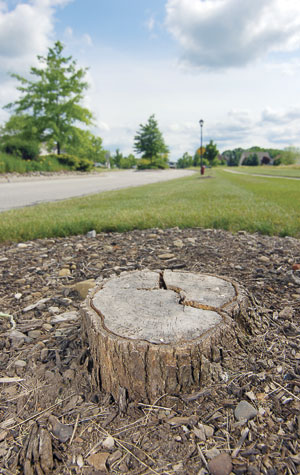 It’s the season of mating for emerald ash borers, and although none of the insects have been found in Kent, city workers are removing and replacing ash trees to reduce the city’s risk against widespread infestation.

Since 2004, Kent has removed 400 ash trees to reduce the spread of these Asian beetles.

Approximately 200 of those have been removed since late March, when the Ohio Division of Natural Resources awarded the city, along with 29 other communities, $37,500 to remove and replace all ash trees on public property.

That amount is $12,500 less than what the city originally asked for. The decrease in anticipated funding has reduced the city’s tree removal pace by 25 percent, said Gerald Shanley, the city Arborist.

“I anticipate in two years we’ll remove all of the ash trees on public property,” Shanley said. Once the trees are removed each will be replaced with a different tree species, he added.

As of this summer, the city is quickly removing every ash tree it can. But there isn’t much Shanley and other city officials can do about the trees planted on property not owned by the city — that includes the 60 to 70 ash trees spread across the Kent campus.

Until there’s a report of emerald ash borer activity on campus, there are no plans to remove any ash tree, said Heather White, manager of campus environment and operations.

Shanley said because none of the trees in the city are actually infected, the ones removed are either processed into mulch or given away as firewood.

The larger logs are sold to lumber companies within the state because of a quarantine placed on Ohio by the U.S. Department of Agriculture that forbids residents from transporting ash tree wood over state lines.

The emerald ash borer, with its metallic green body smaller than a dime, was unintentionally transported to Michigan from China more than a decade ago. Since then, it has threatened the existence of ash trees in two Canadian provinces and 14 states, including Ohio.

Between May and August, the adult borers fly into ash trees, hatching larvae that feed off the nutrients and water within the ash tree. This process causes the trees to starve to death in two to four years.

Three years ago, the emerald ash borer reached Portage County through a shipment of infected firewood.

“Once we find a positive ID in the city, it’s going to be a stronger public response,” Shanley said.