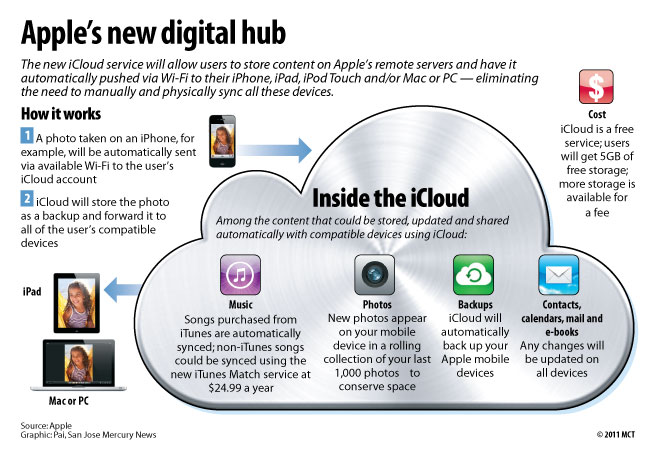 Students will soon be able to transfer schoolwork from an iPad to a MacBook without using cords or pushing a button.

Apple’s iCloud, which the company revealed last week, eliminates the use of flash drives for Apple users. The cloud service stores content from one Apple device and wirelessly sends the content to all of the user’s Apple products. iPhone users can take a photo with the phone’s camera and it will send to iCloud without any manual syncing process or proximity limits.

“We are going to move the digital hub, the center of your digital life, to the cloud,” Apple CEO Steve Jobs said during the keynote speech last Tuesday. “Some people think the cloud is just a hard disc in the sky. We think it’s way more than that.”

Previously, Apple introduced MobileMe, which allowed users to store 20 or 40 gigabytes. It later required a paid subscription, and then stopped accepting new users. iCloud will replace MobileMe in the fall.

The iCloud announcement has some Kent State Mac users excited, while others plan to wait to find out about all of its capabilities.

“I like the design, the continuity, the OS and hardware,” said Stephen Forbes, senior music education major who has used a Mac for five years. “It’s free; I will (use it). It’s like an external hard drive.”

Elizabeth Gould, senior fine arts major, said she is not a Mac user and has no need for iCloud.

“A Mac is only for people with specific needs,” Gould said. “I do a little bit of everything. I’d have to see what they offer. It’d be convenient to have everything synched, but I’m doing fine now.”

Alex Minko, senior electronic media major, said he uses a Mac but not other Apple products.

“I have no real need, without an iPad or an iPhone.” Minko said.

Apple has added iTunes Match as well. This product syncs iTunes music through iCloud and replaces any music that users rip from CDs with their matching iTunes files for a $25 yearly fee.

“I would use the syncing,” Forbes said. “You only pay a small fee for all that music.”

iCloud is Apple’s response to Amazon.com’s cloud, which stores all downloadable Amazon purchases and uploaded content on separate servers.

Unlike other Apple products, iCloud will not be available for PC users. While the product has been created, the exact date of release is unknown.

Apple is facing a lawsuit from similarly named iCloud Communications, an online phone service provider based in Phoenix. Lawyers for iCloud Communications wrote in their complaint that the company has received inquiries about whether it is owned or affiliated with Apple.