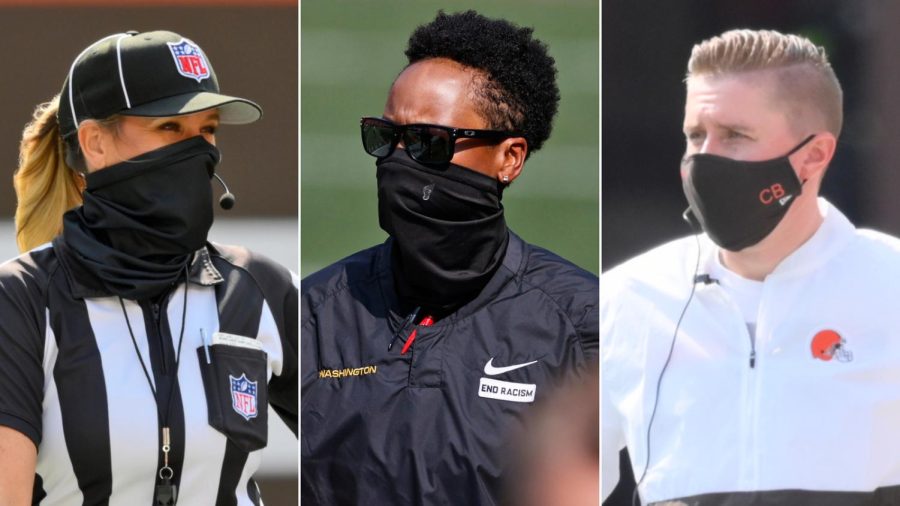 (CNN) — For the first time in the NFL’s history, three women were on the gridiron Sunday in an official capacity during a regular-season game.

A female coach was on each sideline and a female official was on the field when Washington Football Team faced off against the Cleveland Browns at FirstEnergy Stadium in Cleveland.

Callie Brownson is the Browns’ chief of staff, Jennifer King is Washington’s full-year coaching intern, and Sarah Thomas is an NFL official.

Both teams shared their excitement in being a part of a historic day on their social media accounts.

“Making history. Today’s game marks the first regular-season game in @NFL history to have a female coach on both sidelines + a female official,” the Browns tweeted Sunday.

Washington Football Team tweeted, “We’re more than proud of @JenniferKing5 and all the women who are breaking barriers in our league !!”

Two of these women are no strangers to breaking the glass ceiling.

Thomas has made history several times as she was the first woman to officiate a college bowl game and was the first female official ever in the NFL five years ago.

Brownson was the first full-time female coach at college football’s Division I level when she was named an offensive quality control coach for Dartmouth in 2018.

Before she came to the NFL, King was an offensive assistant coach at Dartmouth and served as an assistant receivers coach and special teams assistant for the Arizona Hotshots of the short-lived Alliance of American Football.

King has experience as a player as well. She was a seven-time All-American quarterback and receiver for the Carolina Phoenix of the Women’s Football Alliance from 2006-2017.