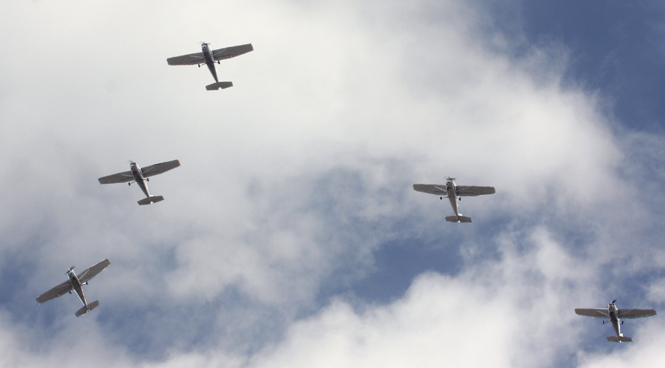 Several planes fly in “V” formation over the Kent State Airport in memoriam of Richard “Dick” Schwabe Friday. Pilots, faculty, staff and students — both former and current — gathered to mourn the loss of the aviation professor who died March 23. Photo by Valerie Brown

At the Kent State Airport, 20 planes lined the runway Friday, waiting to be flown by faculty and alumni in memory of professor Richard “Dick” Schwabe’s life.

“This is a very special moment for me as well as all of us,” said Tim Palcho, lecturer for the College of Technology. “I know this will honor Dick’s memory, and we’ll never forget it.”

On March 23, retired professor Richard Schwabe, 89, passed away of natural causes. To honor his life, people gathered at the airport for his memorial flyover. Faculty and alumni flew in four groups of five in a triangular form over the Sheraton Hotel in Cuyahoga Falls where Schwabe’s family and friends were gathered.

“When I saw the planes flying over the hotel, I felt it was very emotional for me and my family to watch,” said Ric Schwabe, Richard Schwabe’s son. “But in the end, I saw there was a reputation that he made in the school, and this was a symbol of that reputation.”

One plane trailed behind the flight formation, as is traditional for a memorial flyover, said Isaac Nettey, associate dean at the College of Technology.

“The missing man formation is where one of the five planes is missing a plane to make an even formation symbolizing the fall and loss of a very important person,” Nettey said. “We’ve definitely lost someone very dear to this university.”

Schwabe and his wife, Jean, were married for 65 years. She said her husband had a great sense of humor, sometimes throwing cookies at students and faculty. She was worried, though, that a storm would prevent Friday’s flyover.

“We had about 25 to 30 family members at the hotel all worried,” she said. “But it all cleared up, and we were able to see all the planes passing by. It left me breathless. It was absolutely beautiful, and I’m so proud of those who flew the planes.”

Palcho, the flyover’s chief instructor, knew Schwabe since 1984. Palcho was then a student in the flight program, and 14 years later became a professor at Kent State working with Schwabe.

Andreas Esparza, 1986 Kent State alumnus, made a photo album of everyone at the airport flyover and recorded thoughts and prayers. He said he wanted to preserve Schwabe’s legacy and thought the album and the flyover were the best ways to express it.

“Dick did some of the most dangerous flying in the world during World War II,” Esparza said. “Because of the war and because of the draft he was a gruff prick, but he deserved a lot of respect, and I’m here to pay that respect.”

Albert Beckwith, a longtime friend of Schwabe and president of Commercial Aviation Corporation in Stow, has known Schwabe since 1966. He said they flew planes together many times.

“He was a prince of a pilot,” Beckwith said. “I’ve lost a dear friend of mine, but this flyover is a way to keep his legacy alive.”

After the planes landed back at the airport, they stayed on the runway a little while longer. Those who stayed gathered in a group photo with all 20 planes in the background.

Before a photo was taken, Esparza set up his camera and said, “Come on everyone, quiet down and smile for the camera. I gotta send this photo to heaven.”