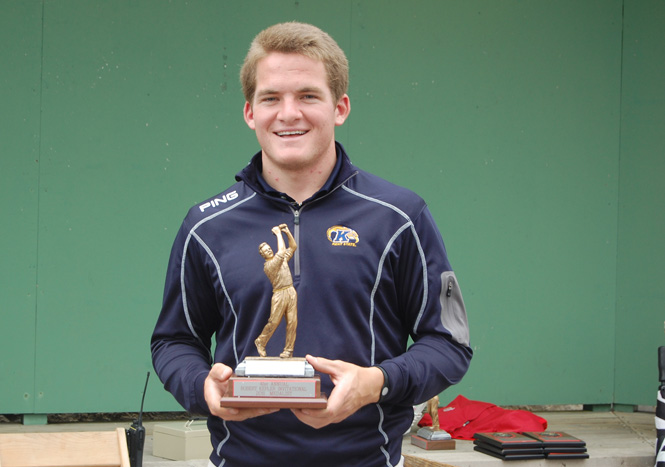 Eric Frishette, who golfed for Kent State from 1990 to 1994, is the only golfer who totaled seven wins for his career.

That thought didn’t hinder Hahn from his goal.

After watching Illinois’ Luke Guthrie sink a 25-foot putt on the final green, Hahn had to sink a putt of his own to take a share in the victory.

The successful putt gave the Flashes a first-place finish at the tournament. Kent State tied with Illinois for a final score of 857.

It was an ending that seemed scripted.

Hahn and Guthrie were the final two competitors to finish. Both athletes were competing for the individual crown, as well as the team crown.

On the final green, hole No. 54, the duo was in a tie for first place.

Each competitor stood by and watched as his counterpart inched closer to a victory in the Robert Kepler Intercollegiate Invitational at the Ohio State Scarlet Course.

Guthrie sunk a birdie putt, giving him a three-round score of 210.

Hahn and his coach watched as the crowd erupted with cheers for the Illinois golfer, who guaranteed himself a share of the crown with the putt.

Then, Hahn and Page decided what course of action to take on a putt.

“Once we picked the line I really felt like he could make it,” Page said.

Bogeys courtesy of a bad wedge shot and a shot at a bunker on the previous two holes dropped Hahn to a tie for the first-place position.

Luckily, Hahn’s years of experience helped him maintain composure and sink the crucial shot. Hahn has learned to focus on the adrenaline rush flowing through his body to make the shot.

“I’ve sort of trained myself to focus when I need to focus,” said Hahn, who has tallied 15 top-5 finishes in his career. “It’s just such a short window, why waste that time, why hit a bad shot due to a lack of focus.

“You can feel the adrenaline going on and your heartbeat rising … it’s all good feelings for me.”

This mindset has paved the way for 25 top-10 finishes over the course of 52 events. That puts Hahn in third place on Kent State’s list of career top-10 finishes.

Frishette and Ben Curtis are the only ones who have recorded more. They left Kent State with 28 top-10 finishes.

With only three events remaining in Hahn’s collegiate career, it’ll be tough for Hahn to match that number.

Next week, Hahn will get his first shot at getting his eighth career victory as the men’s golf team travels to compete in the Mid-American Conference Championships at the Karsten Creek Golf Club in Stillwater, Okla.

Last season, Hahn and teammate Brett Cairns both shared the first place spot at the tournament.

This year, if Hahn wants to be the sole owner of the first place spot on the career leaders list, he’ll need to post a similar performance.

“Hopefully, by the end of this year you can consider me the best golfer to go through Kent,” Hahn said.