Taking a closer look at a Kent State gymnast 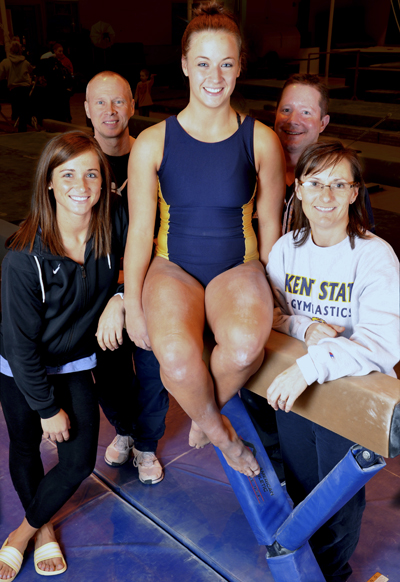 Kent State was one of the last schools Marie Case looked at when choosing where to take her talents.

The gymnast was thinking about attending other schools like Ohio State, Maryland or West Virginia before she looked at Kent State.

Case made the decision to go to the Golden Flashes’ squad. It looked like a major step down at the time, but Case said at Kent State she felt “a good sense of belonging.”

That sense of belonging started before Case officially visited to take a look at the Kent State gymnastics program.

Rachel Stuck, a Kent State gymnast that finished her collegiate career after the 2008-09 season, attended the same high school as Case – Mercyhurst Prep.

When Case would travel to the M.A.C. Center to watch Stuck compete, she remembered thinking “I like it here.”

At that time, Case was already on the Kent State gymnastics coaches’ radar.

“We were just hoping that she was going to look this way,” Kent State coach Brice Biggin said. “She got recruited from some big schools…it certainly helped having Rachel coming here.”

When it was time to choose a school, Kent State may have had a bit of an upper hand to the others, but Case said no other school matched the atmosphere the Kent State gymnastics program provided.

“I felt like I wanted to make an impact on the team,” she said, “and I felt like here would be a good place to do that.”

Case has been impacting the team from the start.

From practices, small meets to large meets, Case is a crucial all-around contributor to the team. Her coaches and teammates say that Case competes as if it’s a crucial event in each aspect of practice.

This work ethic has helped Case take the national stage.

All-around, Case is ranked 18th nationally, according to the Kent State athletics website.

The 5-foot, 2-inch native of Erie, Pa., recorded an all-around score of 39.200 in the Mid-American Conference Championships at Mount Pleasant, Mich.

At the NCAA Regionals, the place where Kent State earned its first ever spot into the National Championships, Case posted an all-around score of 38.600.

Throughout the season, Case has been a cornerstone of the gymnastics teams success.

“I don’t think I’ve ever seen a freshman react quite this way,” Biggin said. “We expected a lot of this, but I think we got more than what we were expecting.”

It’s the freshman’s mindset that keeps her at the top of the game.

Case admits that a mishap during competition angers her greatly. Years of practice have helped her channel that anger and use it to better the next event, which can sometimes be just four or five minutes away.

“I get really, really mad at myself, and I’m able to let that anger out on the next event and just do great,” Case said.

That ability comes from gymnastics experience that started at the early age of three. When Case was 7 years old she started competitions.

Now, the 18-year-old is competing at the most prestigious collegiate tournament – the NCAA Championships. This year Kent State is hosting the Championships as well as competing as one of the 12-team field.

The Flashes earned a Tournament birth when they placed second out of six teams at the NCAA Regionals at Ann Arbor Michigan with a team score of 195.450.

Case maintains composure entering one of the biggest events in her life thus far and says she’s entering it with no added pressure.

Senior captain Christina Lenny went to the NCAA Championships during her sophomore season as an individual.

Lenny said if she were in the position of going to the tournament as a freshman that she “would have been so nervous.”

Kent State is at the bottom of the 12-team field entering the Championships with a Regional Score of 195.450 and a National Qualifying score of 390.695.

But looking back at the other schools Case could have gone to, well, luckily she picked Kent State.

Ohio State, Maryland and Western Virginia are not part of the 12-school field competing in the NCAA Championships this season.