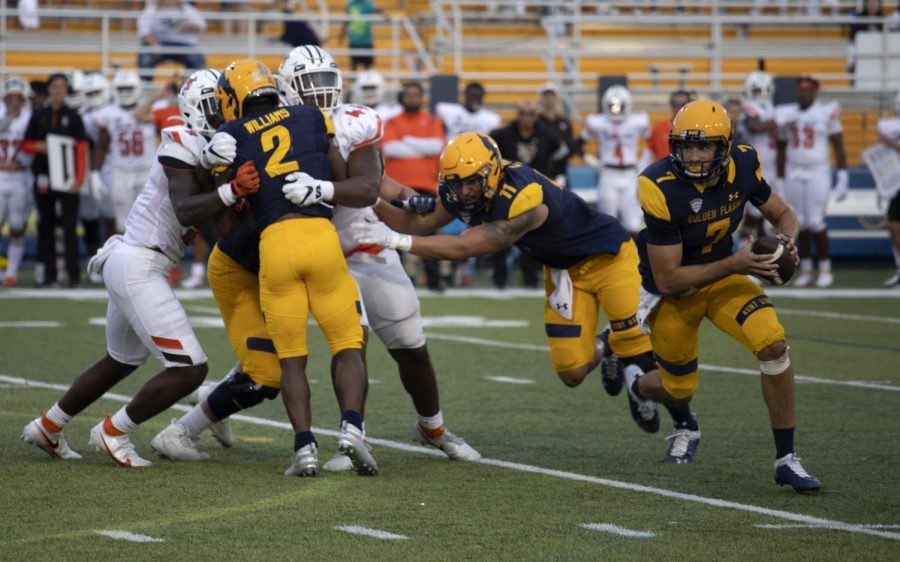 Grad student Dustin Crum, number 7, runs with the ball and scores a touchdown during the football game against Bowling Green State University on Oct. 2, 2021. The Golden Flashes won their homecoming game 27-20.

Two of the top quarterbacks in the Mid-American Conference will go head-to-head Saturday when the Kent State football team faces Western Michigan University.

Graduate student quarterback Dustin Crum is coming off the best performance by a KSU QB since 1997. He threw for 407 yards and three touchdowns while rushing for 72 yards and two touchdowns.

Crum is third in the MAC with 217.2 passing yards per game.

“All the best quarterbacks elevate the people that are around them,” coach Sean Lewis said. “We have really talented kids, and because of Dustin’s ability, he makes them even better. With his timing, location and ball accuracy not only are guys able to catch the ball, but run with it in a hurry.”

WMU’s redshirt sophomore QB Kaleb Eleby is currently on the opposite end of the spectrum, trying to rebound from one of the worst performances of his career in the Broncos 45-20 loss to Ball State.

Eleby threw two interceptions and had four fumbles, turning the ball over a total of six times. It was a rare performance for the quarterback, who became the Broncos starter in the 2020 season. That season he had the third best passer rating in the FBS (195.1), trailing only future NFL starters Mac Jones and Zach Wilson. He led the nation in yards per passing attempt (11.2) and threw the most touchdown passes in the MAC with 18.

This season, Eleby leads the MAC in touchdown passes, with nine. He also leads in passing yards per game with 239.7.

“He does a good job understanding schemes and makes great decisions,” Lewis said. “He can make you hurt with the great weapons he has around him.”

WMU has been on a rollercoaster of a season thus far. They started the season by being blown out by the University of Michigan 47-14, but would bounce back in a big way. The Broncos would win their next four games, first beating FCS Illinois State University 28-0, then upsetting the University of Pittsburgh as 15-point underdogs with a 44-4 victory.

WMU had a dominant 23-3 win over San Jose State University in week four, and they would open conference play with a 24-17 win over the University at Buffalo.

The Broncos’ win streak was stopped last week by Ball State as they were dominated by the Cardinals’ defense and lost 45-20.

“They’re coming off an outing last week that left them with a bad taste in their mouth,” Lewis said. “They’re going to be eager to get back out and defend their home turf. We have to be at our best to play a really good football team.”

The Flashes are coming off a close primetime win over Buffalo. KSU dominated the first half and went into halftime with a 31-10 lead. But they had a horrible third quarter, getting outscored 28-3 by the Bulls and allowing them to take the lead into the fourth.

“I’m really bad at halftime speeches this year,” Lewis said. “I got to work on it so we come out and are more focused and engaged. A lot of those errors that occurred in third are just a lack of focus and the fundamentals that we were doing at a really high level in the first half, we were just a gap off.”

KSU’s offense would step up in the fourth with two touchdowns, and the defense would force two turnovers to give the Flashes a 48-38 win.

The Flashes enter the game in first place in the East with a 2-0 MAC record (3-3 overall). WMU has a 1-1 MAC record (4-2 overall) and is one of five teams in the West in second place. Northern Illinois University is the only team in the West that doesn’t have a 1-1 record. They are in first at 2-0.

The Broncos’ offense is fourth in the MAC in total yards per game (402.3).

Sophomore Skyy Moore is WMU’s top receiver, and he leads the conference in yards per game with 98.8.

“[Moore] is a dynamic playmaker,” Lewis said. “They line him up all over the place, inside and outside, which forces you to dictate some things in terms of who you’re going to cover him down with. He runs the full gambit of the route tree and has a great understanding of how to manipulate leverage. He is competitive at the catch point and is a terrific runner after the catch. He has a complete skillset.”

Sophomore Corey Crooms is second on the team in receiving yards with 422 this season (70.3 per game). He had 161 yards against Pittsburgh.

KSU’s defense has struggled in the pass game this season, giving up the second-most passing yards per game (255.7) and the fifth-worst completion percentage (61.9) in the MAC. However, the competition has been fierce, and the Flashes have faced offenses like Texas A&M and Maryland.

The KSU secondary has stepped up again and again in the turnover game, and they are second in the FBS with 12 interceptions. Two of the interceptions came last week against the Bulls late in the fourth quarter, which sealed the win for the Flashes.

Lewis said that aspect of the defense is “phenomenal.”

“It’s a testament to the work that the kids put in all through the offseason,” he said. “The commitment to finding those marginal gains, and where we can be a step quicker, where we can communicate better and maximize the opportunities for turnovers.”

WMU sits in the middle of the MAC in terms of run game. They are sixth in rushing yards per game (159.3) and tied for fifth in touchdowns with 11.

Junior La’Darius Jefferson is their lead rusher with 72.5 yards per game. He is also tied for 11th in the FBS in rushing touchdowns with eight. Sophomore Sean Tyler sees almost just as much action as Jefferson, and he averages 69 yards per game.

The Flashes’ run defense ranks 10th in the MAC, and they gave up 312 rushing yards against Buffalo after only giving up 55 to Bowling Green the week prior. Outside of the BGSU game, KSU has not held a team to less than 130 rushing yards.

Flashes’ sophomore wide receiver Dante Cephas is coming off a career game where he had 186 receiving yards and three touchdowns. It was the second game this season where Cephas had over 100 yards.

The Broncos’ secondary is third in completion percentage (56.9) and fifth in yards per game (196.7). Junior cornerback Dorian Jackson leads the team in pass breakups with eight this season.

Outside of the quarterback battle, the KSU run vs. the Broncos’ defense will be a great matchup to watch.

Kent State leads the MAC and is 13th in the FBS in rushing with 239 yards per game.

WMU’s rushing defense is the best in the MAC, only giving up 114 yards per game. If you take away Michigan’s 335 rushing-yard performance in week one, they are only allowing 72 yards per game.

This dominance has allowed the Broncos to give up the fewest total yards per game in the conference (311).

The Flashes have a lot of depth in the running game, with sophomore running back Marquez Cooper, Crum and graduate student running back Xavier Williams all being among the top 20 rushers in the MAC.

Lewis said the run success starts with the players up front.

“The O-Line and tight ends did a great job at level one,” he said. “Controlling the line of scrimmage. There was a play where Coop scored down our sideline, and the kids executed a play in tempo and had [Buffalo’s defense] on their heels. It was nothing special, everyone did their job together, and it looked like a beautiful ballet. It’s artistic.”

Cooper leads the backfield with nearly 80 yards per game and four touchdowns.

WMU leads the conference in sacks with 18 so far this season. Fayad leads the team with four and a half sacks.

“We have to stay in front of them,” Lewis said. “We have to have a great pad level. We have to have great communication, because they do a good job slanting, moving and angling their defensive line. They bring some exotic pressures where they can overload you. We have to be clued-in to all those different looks.”

The Flashes and Broncos will play Saturday at 3:30 p.m. in Kalamazoo, Michigan on ESPNU.