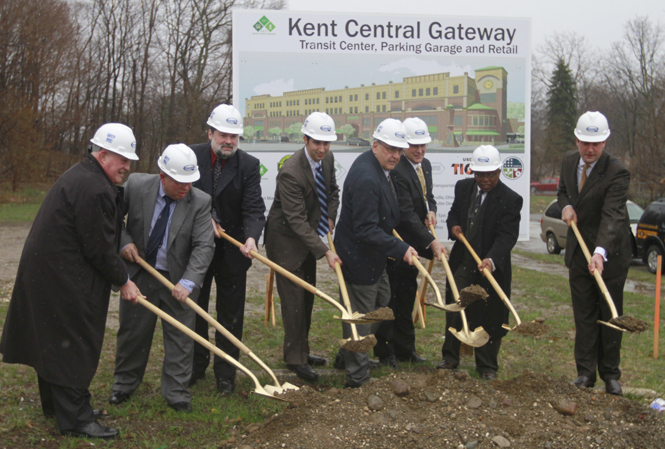 Even rainy, ominous weather could not prevent the groundbreaking of a significant project in the renovation of downtown Kent.

Officials stayed under a tent then went outside to lift the initial dirt at the future site of the Kent Central Gateway facility Monday afternoon. The event marked the culmination of the collaboration between the city, Kent State and PARTA.

Rick Bissler, PARTA board of trustees president, said the $26 million project would not be possible without cooperation from all parties involved.

Bissler said while PARTA has just started to get involved with the downtown renovation, the project is a continuation of the vision of Acorn Alley developer Ron Burbick.

Bissler credited him for getting the initiative started.

The project received high praise and support throughout the development process from U.S. Congressman Tim Ryan.

“I do believe that Kent is really becoming a model on how you piece together what a 21st-century city and town should look like,” Ryan said.

Gregg Floyd, vice president of finance and administration for Kent State, was at the ceremony. Floyd was not available for comment in time for publication.

Kent Mayor Jerry Fiala said the project is a piece of the puzzle for making public transportation adequate for everyone as gas prices increase, while also producing more jobs and opportunities for downtown Kent. Fiala said it would also help serve Kent State students.

“It’s not known that students are almost half of the population of this town nine months a year,” Fiala said. “We got to live together, and we’re doing a better job of that every day.”

The project is mostly funded through a $20 million federal grant awarded last spring as part of the Transportation Investment Generating Economic Recovery program. This program was funded through the American Recovery and Reinvestment Act.

In February, PARTA agreed to pay $775,000 for the property at 115 S. Depeyster St., formerly the Car Parts Warehouse. The warehouse moved to the location of the former NAPA Auto Parts store at 108 W. College Ave.

PARTA officials are still locked in eminent domain proceedings to reach a sale price agreement for the final two properties needed to start building. The properties are at 238 and 244 E. Main St.

Bryan Smith, PARTA planning director, said if costs go over the $20 million budget, officials will have to find ways to cut costs on construction. Pending the final agreements, Smith said PARTA hopes to start construction in May.

The center is scheduled to open in fall 2012.