Kent State student wins prizes on “The Price is Right” 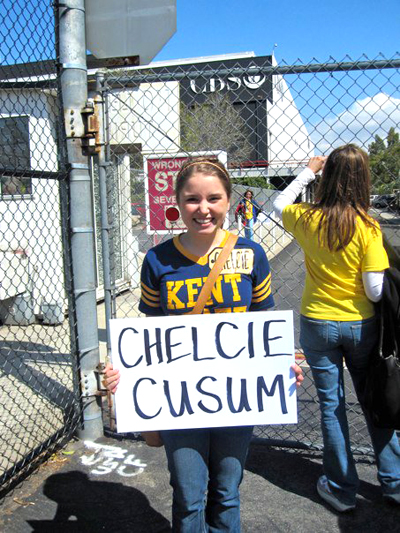 Over spring break, one Kent State student fulfilled one of her childhood dreams of being a contestant on “The Price is Right” television show.

“I grew up watching Bob Barker and always told my family once I was 18, I was going to be on ‘The Price is Right,’” Chelcie Cusumano, senior human development/family studies major, said.

A couple of Cusumano’s relatives recently moved to Los Angeles. She said she decided spring break would be the perfect opportunity to visit them and get tickets to the show.

1. Must have a crazy, fun and outgoing personality.

3. Be loud, make up cheers and scream so the producers remember you.

4. If possible, always go in groups. Cusumano said a lot of people who get picked are those who are part of a large group of people who wear themed shirts. She said she saw a group in the audience called Drew’s Crew.

Cusumano said tickets to “The Price is Right” are free, but she had to get to the box office early. She and a friend were walking down the dark streets of Los Angeles at 5 a.m., she said, when she turned a corner and saw all these colorfully dressed people waiting in line for tickets.

“From the minute I got there, everyone was going crazy, including myself,” Cusumano said.

Cusumano’s plan was to be really loud and obnoxious and to represent Kent State. She said since Drew Carey, the host of “The Price is Right,” grew up in Cleveland and went to Kent State, she thought showing him her hometown pride would pay off.

Cusumano was in the middle of a cheer when one of the producers asked her what she wanted to do when she graduated. Her reply was, “I want to be on ‘The Price is Right.’”

After hours of cheering and waiting in lines, Cusumano finally took her seat among the 200 other audience members. The show began, and Drew Carey stepped out onto the stage.

During a commercial break, Cusumano said Carey began talking about college and she knew that was her chance. She started screaming and showing off the Kent State shirt she was wearing. Carey saw Cusumano and briefly asked her about the bars in Kent, she said.

All the sudden, the show was back from break and her name was called, Cusumano said. It was the last round to bid on items for a chance to get on stage. The bid was on an Xbox 360. Next to Cusumano was a woman who bid $700. Cusumano said she bid $701 and won.

“It was crazy because I ran up on stage, hugged Drew from the side and patted his belly,” Cusumano said.

Cusumano said neither of her rats came in first place, but she still won a full cooking set, along with a check for the Xbox 360 she bid on earlier.

“Of course I wanted to be in the showcase and win everything, but being there was enough,” Cusumano said.

The whole day was a highlight of her young adult life, Cusumano said. To actually be able to do something like that was such a great memory, she said.

“It was on my bucket list, and I was so excited to cross that off,” Cusumano said.