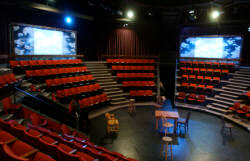 Read: Behind the scenes of “Hamlet:” post-apocalyptic costumes

When director Mark Monday started planning his own twist on William Shakespeare’s “Hamlet,” he thought back to the rumors that President Barack Obama was a Muslim.

“We’ve got a black man as president, yet we can’t solve the problem of corruption and greed, which is just what the play is all about to me,” Monday said of his first Kent State Shakespeare production that opens Friday at the Wright-Curtis Theatre. “This is an attempt to show we can make strides, but we can’t solve that individual problem.”

“We’ve got a black man as president, yet we can’t solve the problem of corruption and greed, which is just what the play is all about to me,”

Monday said the timeless appeal of Shakespeare’s tragedies is that they are open to interpretation by the director and the audience.

For the upcoming production, Monday moved “Hamlet” out of the Middle Ages to the not-too-distant future Denmark and converted Hamlet to a Muslim.

Hamlet, played by graduate theater student Darren Nash, will wear traditional Muslim dress with jet-black hair poking out from his knit cap. To prepare for the role, Nash has been swimming laps three times a week to build up the lung capacity to speak in Shakespeare’s iambic pentameter since he was cast in November.

“To me, Hamlet being Muslim increases the conflict between Claudius and Hamlet,” Monday said, adding he made Denmark a mostly Christian country. “After Hamlet converted, Claudius sees that down the line, the most powerful position in the world is going to be held by a Muslim, and he can’t stand it. That’s part of what drives Claudius to want to get rid of Hamlet.”

Graduate theater student Marc Moritz, who plays King Claudius, said he’s played mean characters before but no one as power-hungry as Claudius.

“It’s Shakespeare, so I don’t really have to work too hard at it because his actions are so heinous,” he said with a laugh before turning serious.

“Claudius doesn’t consider himself and evil character. He doesn’t consider what he’s doing wrong, but Mark (Monday) tried to find a moment of awareness for remorse where (Claudius) is praying.”

Nash, who has starred in several community productions of Shakespeare in California and seen “Hamlet” several times, said the production’s nontraditional interpretation will benefit the audience.

“I think Shakespeare is like math — people are intimidated by it and don’t think they are smart enough to understand it,” Nash said. “This is not your father’s ‘Hamlet.’ My hope is that the changes have made ‘Hamlet’ more approachable, and the audience leaves the theater feeling smarter for having understood the play.”

Where: Wright-Curtis Theatre in the Music and Speech Center

Another twist in the production is that Hamlet’s friend Horatio and former friends Rosencrantz and Guildenstern are women, played respectively by graduate theater students Melissa Owens, Carolina Morones and Cameron Dashiell.

“In today’s world, male Muslims don’t befriend women like we have in this play,” Monday said. “I found it interesting that we can make that stride too between men and women and religion and sex that Hamlet can have all of his best friends be women.”

Monday took his initial inspiration of the Obama presidency one step further. He made the castle area of the stage an oval office with an eagle emblem in the marble floor, which was then juxtaposed with the concrete and industrial look on the second level of the set Mondayrefers to as “the land of chaos.”

“The idea was to separate the order and pristine of the Oval Office with the chaos of the outside world,” he said, adding they modeled the set design from a deteriorating theater in Detroit.

“In this world, we’ve bridged the gap between religion and politics,” Monday said. “But we can’t bridge the gap with human corruption and greed that one gets into a place of power.”