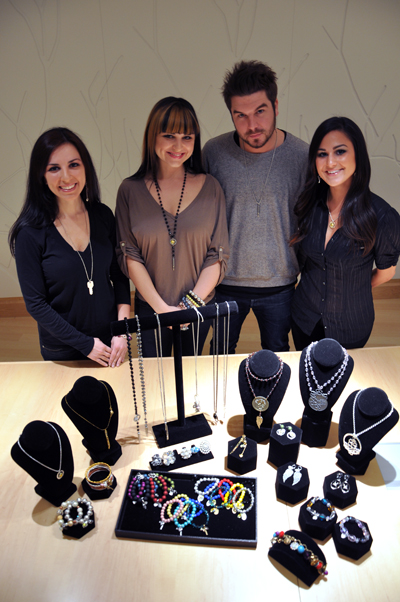 Three alumnae started an edgy jewelry company that emphasizes female strength and is gaining popularity, even among celebrities such as Lady Gaga and Beyonce.

There is a balance of femininity and attitude in the jewelry designs. Dirty Pretty Things Jewelry promotes positive strength in today’s women, while it creates an in-your-face fashion statement. Each piece is bold with unique detailed elements.

Chrissy LoConti, president of the company, got the idea from owning Sinergy, a Cleveland nightclub and restaurant. She wanted to translate the good and bad elements of the interaction between men and women into jewelry.

In 2008, the graduate with a degree in jewelry and metals started the female-empowering company with the help of her sister, Annemarie LoConti, and college classmate Sarah Piscazzi.

What makes DPT Jewelry interesting is each piece has meaning through its name and design. The company’s vision is to connect women and send the empowering message of a balance between compassion and confidence.

Chrissy LoConti named the company after an article she read that introduced jewelry with the statement dirty pretty things.

“It made sense,” said Chrissy LoConti, a 2006 graduate. “You can play off of those words (dirty and pretty) while you’re making jewelry.”

Annemarie LoConti, a 2005 graduate with a bachelor’s degree in finance, said the LoConti family comes from a long line of entrepreneurs, which is where the funding came from.

“At Kent, they always asked us to have a concept behind our work,” said Piscazzi, vice president of design. “We carried that through to our business. It sets us apart from other fashion jewelry.”

As the entrepreneurial-minded team creates a line, they give it a name and show a side of it that will relate to each kind of woman. They design bold, sparkly pieces that have attitude behind the design.

Chrissy LoConti created the company’s first character, Marie Neville, in February 2009. She is a fictional character who is described as a force of nature: a bombshell, a heart breaker. She is relatable and represents independent, strong women.

“It’s about being strong but still being a lady,” Chrissy LoConti said. “Marie Neville is aggressive — big pieces — she’s the dirtier side.” Charms on a necklace could include a cupcake and a heart next to a skull and a gun, showing the delicate balance of strength and femininity.

The next character created in February 2010 is the more feminine character, Medea Maple. The line plays up the pretty side of DPT Jewelry by using softer metal elements. There are pearls and flowers, but it still maintains the edgy vibe.

The two characters reflect each of the designers’ personalities.

“Everything that we do is definitely a collaboration; one character leans toward each of us,” said Piscazzi, a 2007 graduate with a degree in jewelry and metals.

Chrissy LoConti said they take inspiration from their surroundings and people they meet.

Currently, the company manufactures necklaces, bracelets and earrings that sell from $18 to $98. One of the women’s goals is to have their characters chosen to represent a MAC or Urban Decay line of makeup.

“We like to think of them as a potential comic book series where the line would grow, and we’d create a drawing and a life for her in the jewelry,” Chrissy LoConti said. “Each has a weapon, and every (detail) matters in each piece.”

The women are working with a manufacturer and assembling the jewelry themselves. Some pieces are all American-made, and some have parts from China.

“Pretty much we’re touching every piece right now,” Chrissy LoConti said. They work on producing jewelry in their office in their hometown of Mayfield.

Annemarie LoConti said working internationally is difficult at times, but it helps keep the costs down so they can keep an affordable fashion price.

The two sisters work and live together and agreed there are positives and negatives. They can work on ideas together any time by taking their work home with them, but drawing a line between the two relationships is difficult at times.

The typical audience DPT Jewelry tries to reach is 18- to 35-year-olds. They said it is a huge focus, but they don’t like to put a label or limit on it. Even the LoContis’ 75-year-old grandma wears the jewelry.

Chrissy LoConti said the focus could go into the high-school age, but people react poorly without giving it a chance to understand the message.

“It’s always taking that recognizable element, the bullet or the gun, and changing the view on what it actually means,” Chrissy LoConti said. “Instead of it being a negative, we’re trying to have it more as a protection symbol. If you have a necklace that has the heart and the gun, it’s called ‘guarded heart.’ It’s about love, not shooting someone.”

William Mandansky has been the company’s marketing and sales representative for the past year. He and Chrissy LoConti met in grade school and hung out a lot when they were growing up, but they grew apart when he went to college at Arizona State University.

“I consider our group family,” Mandansky said. “I can’t wait to get to the office and see them. When you love what you do, it’s not work.”

Chrissy LoConti asked Mandansky to deliver a bag of DPT Jewelry to celebrity Kim Kardashian while she was at Barley House in Cleveland. He had to sneak in the back door to get in.

“Kim Kardashian had a table with 10 people and I walked up, poured a glass of champagne and acted like I belonged,” Mandansky said. “I finally got the balls to give it to her and said, ‘Hey, I have a present for you.’ She was really cool, and I actually talked to her for awhile.”

Other famous women the company has reached are Kendra Rossi, Holly Madison and Jenna Haze.

“Having (celebrities) recognize your work definitely puts you on a high, but then you come back down to reality really quick too,” Piscazzi said.

“When (Sarah) went on tour, she wore our jewelry, and Lady Gaga complimented it,” Mandansky said. “That’s when we thought ‘We actually got something here!’”

After the compliment, the company sent jewelry to Lady Gaga and her dancers but aren’t sure how Beyonce got a DPT Jewelry necklace. Annemarie LoConti thinks she may have gotten it from Lady Gaga when they made the music video for “Telephone” together.

“She wore it in Hawaii on a family vacation; that’s pretty badass,” Annemarie LoConti said of Beyonce rocking the “Beauty is Pain” necklace.

The company’s newest idea is a line of bridal jewelry, which will be available soon. The line was inspired by Chrissy LoConti’s own wedding. When she couldn’t find jewelry she liked enough to wear, she decided to make it herself. Some of the staples of the lines will be customizable for bridesmaids.

DPT Jewelry sells internationally on its website and at a retail store in Japan. Nationally, the jewelry is sold at hair salons and in retail stores like Metropark. In Ohio, it is also at Sanity in Chagrin Falls and Atom Bomb Tattoo Shop in Cleveland.

The company is steering away from its retail focus because the meaning of their jewelry gets lost in translation when it is sold in stores. To solve this issue, they’ve decided to focus on a home party system that will be ready to launch by summer.

The company will remain local because of its success.