Music and Speech maintenance worker finds his own rhythm 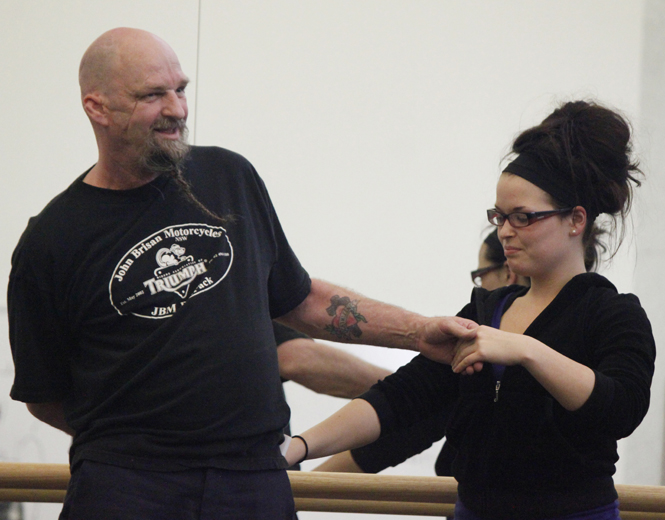 52-year-old maintenance worker Mark Clark practices moves during swing dancing class last Tuesday. Clark has been working in the Music and Speech Building for over two years and decided to join the class after he saw how much fun students were having. Photos by Jessica Yanesh.

His worn, tan work boots strike the floor in an even rhythm as he walks the halls. The keys hanging from his right hip jingle with every step. Occasionally, a call from the black two-way radio that hangs on his left interrupts the steady pulse.

A screwdriver and pair of Channellock pliers rest in the back pocket of his navy work pants. He can fix just about anything with those two tools alone. A tattoo of a heart with his wife Cathleen’s name in it covers his right forearm.

His long beard is twisted into a braid that hangs a few inches below his chin. His face and head are scarred from an accident that happened while he was working at a rubber factory in Canton.

His hat had fallen off and when he bent over to pick it up his ponytail got caught in the machine, which scalped him.

His exterior is tough, but his smile is warm and his heart is big.

To him, the accident was a blessing.

“I think my accident happened to me so that I could help other people,” he said. That’s exactly what he’s been doing since — helping people. Whether it’s others who go through similar accidents or the people in the buildings he takes care of, Mark Clark is all about helping people.

The 52 year old has been a maintenance worker at Kent State for 12 years and in that time has worked in every building on campus. He spends most of his time at the Music and Speech Center, where he has been for about 2 1/2 years.

It was while working at Music and Speech that he first saw a swing dance class taught by Beverly Petersen-Fitts. He was watching through one of the dance studio windows and saw how much fun the class was having. He immediately wanted to join.

He went to his wife, Cathleen, and asked her if she wanted to take the class with him. She works downtown at Home Savings Bank and worked out a plan to take her hour lunch during the class time.

“I didn’t know how good I’d be at it, but I knew I was going to give it a shot,” he said. “You know people in wheelchairs dance; why can’t I? You’re never too old to learn.”

Throughout the semester he has learned a lot. As he rehearses new steps, concentration washes over his face. His hands are suspended awkwardly as he works out the intricate footwork, staring down the whole time as if his feet won’t do what his brain tells them unless he is watching them. After practicing the new steps a few times, he reconnects with his wife to practice their new moves together. Their steps aren’t perfect, but they are having the time of their lives. They giggle as their feet get tangled, and she whispers the steps to get him back on track. After a few tries, it’s time for the music. Cathleen gives her hips a wiggle and eyes up her husband. They swing right and left to get the beat, and before long they are in a groove. By the end, both are grinning.

The high school sweethearts are best friends. They met when Cathleen was just 14 years old. Clark was going to the drive-in with Cathleen’s older brother and cousins. When they couldn’t find any girls to go with them, they came back to get her because it was free that day.

The day she met him, she thought he was cute, but at 14, she said, you think any guy is cute.

What stood out to her was his kindness. They started dating when she was just 15 despite her mother’s disapproval. She was almost 17 when they got married. She was pregnant at the time, and her mother told them to run away, but her father insisted that they stay and get married. More than 30 years later, the two are still married. In fact, they renew their vows every 15 years.

The couple practices dance moves at home at least twice a week. Cathleen even went out and got music for them to use. They like to show their family what they learn, and they’ve even been teaching their young granddaughters some of their moves.

“I’m not here for a degree anymore. I’m just here to learn and have some fun,” Clark said. “I think that’s what the dance class brings.”

It’s his first class at Kent State, but he’s already thinking of taking more. He wants to take Folk Guitar I, and because he and his wife love their dance class now, he is considering taking ballroom dancing to “learn things that I thought maybe I was too old to learn, and then I find out I’m not,” he said.

His wife is not the only partner he has in the class. He actually spends very little time dancing with her in class because they are constantly rotating partners. It helps them, because when they disagree, they can learn from other students. They get a chance to see what everyone else in the class is doing. It helps them settle disagreements on how things should be done.

“I’ll say the other girls all did this,” he said.

Beverly Petersen-Fitts, the couple’s teacher, said everyone dances with everyone in the class. The girls dance with Mark like they would any of the younger men. “There are just no barriers in my dance class,” Petersen-Fitts said. “We’re all dancers.”

Grant Cole is a sophomore musical theatre major in the class with the couple. He had seen Clark around the building, so he was really interested when he saw him in class the first day. He thought it was really cool.

“This class is for everyone, and that’s what I love about it,” he said. “Everyone can dance; everyone can have a good time.”

His coworkers and family were surprised when they heard Clark was going to be taking a dance class. They all wanted to know why. Clark told them that learning how to dance will let him have more fun at social events.

“Being 52, I thought it was time to learn how to dance so we could have more fun at weddings and maybe just me and the wife go dancing one night,” Clark said. “It’s more fun when you learn how to dance rather than standing in the same spot and throwing your arms up in the air.”

Dancing in class has made him more confident to dance in public, but he says it has helped him with his job, too. He has more balance and coordination when he’s up on a ladder or in a lift. It also gives him a better sense of how to take care of the brand new dance studios. He learned that the floors in the studios need to be warm, but he also knows if they are too warm it can be uncomfortable.

“My rooms have to be warm for the dancers,” he said. “They’ll tweak muscles or pull something more in the cold.”

He grew up on a 25-acre farm with cows, hay, corn and a fruit orchard where he said he learned his strong work ethic. This work ethic is why no one ever wants him to leave his or her building. About a year ago when the university tried moving him, Dan Tonelli, engineering and operations manager for TeleProductions, got on the phone to make sure he stayed.

Clark likes working in Music and Speech, but when the time does come for him to move on, he’ll go. Until then he loves his job and where he’s at. He’s happy to go to work every day and wishes more people shared that feeling.

He tries to stop in all the offices every morning just to check on everyone, to make sure that they are happy and don’t need any help with anything. “I don’t know if that’s really what I’m supposed to do or not, but that’s just my personality,” he said.

His coworkers have even given him a new nickname — “Dancing with Stars.” Clark said he may not be ready for the TV show “Dancing with the Stars,” but he is just about ready to conquer going out to a social dance with his wife. It takes a lot of hard work to become a dancer, and Clark doesn’t consider himself one yet, but he said that anyone can do it. You just have to try. “All you have to do is practice a little bit,” he said. Even though it didn’t come naturally to him, he found joy in dancing.

“Mark was fairly confident when he started,” Petersen-Fitts said. “He had to work at it, but I felt like he was confident that he was going to do it.”

Petersen-Fitts is sure dancing will become a part of the couple’s lives forever.

“This will become what they do well into their years,” she said. “Yeah, they’re going to be one of those cute little couples that go out and dance all the time.”