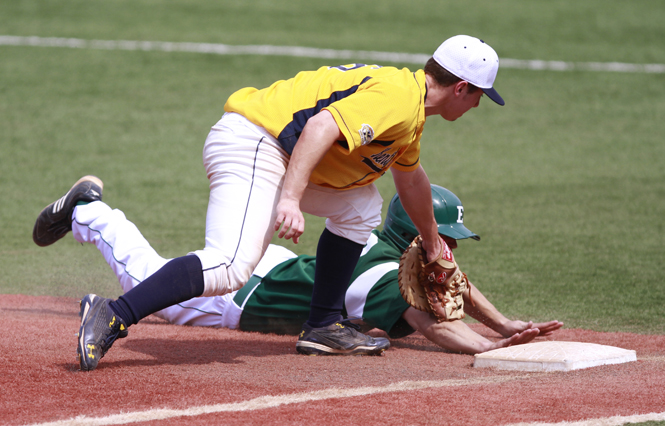 The Kent State baseball team will attempt to restore its dominant play this weekend after falling to Central Michigan in two of three games last weekend.

The Flashes had an 11-game winning streak entering the Central Michigan series.

Kent State coach Scott Stricklin said he hopes to see the defense and offense improve in this weekend’s series against Buffalo.

Despite Buffalo’s poor 7-25 overall record and 0-11 performance in the Mid-American Conference, the Flashes (23-12 overall, 9-3 MAC) cannot take this series lightly.

“Don’t let the record fool you,” Stricklin said. “They’ve struggled a little bit in the conference, but that’s never stopped them from playing well against us. In the last five years they’ve always played tough. They beat us in a series two years ago when we were ranked in the country.”

The Bulls offense has a seven-home-run advantage over any other team in the MAC.

Stricklin said he was not worried about his pitchers, who lead the league with the lowest earned run average.

“If our (pitchers) execute the way they’re capable of executing, then I think our pitching should be fine.” – Scott Stricklin

“If our (pitchers) execute the way they’re capable of executing, then I think our pitching should be fine,” Stricklin said.

The left-hander threw eight innings, gave up one run on four hits, struck out 13 and walked none in his no-decision start last weekend.

The left-hander is 5-4 with a 2.33 ERA. Hallock earned Kent State’s only win last weekend against Central Michigan, throwing seven innings, striking out seven and allowing three runs on eight hits.

Starn, Kent State’s third left-handed starter, enters with a 5-1 record and 1.96 ERA. He leads the team in innings pitched with 59.2, and is second to Chafin in strikeouts with 61.

Stricklin said the biggest difference he wants to see is better offense. The Flashes were out-hit 25 to 24 in their series against Central Michigan, and stranded 23 runners on base to the Chippewas’ 20.

Stricklin said he is looking for the middle of his lineup to improve these statistics.

“Any time you look offensively, you look at the middle of the order: Travis Shaw, Ben Klafczynski and David Lyon,” Stricklin said. “For us to be successful, those guys need to play really well.”

The three-game series against Buffalo is scheduled to start at 3 p.m. Friday at Schoonover Field with Saturday and Sunday’s games both starting at 1 p.m.