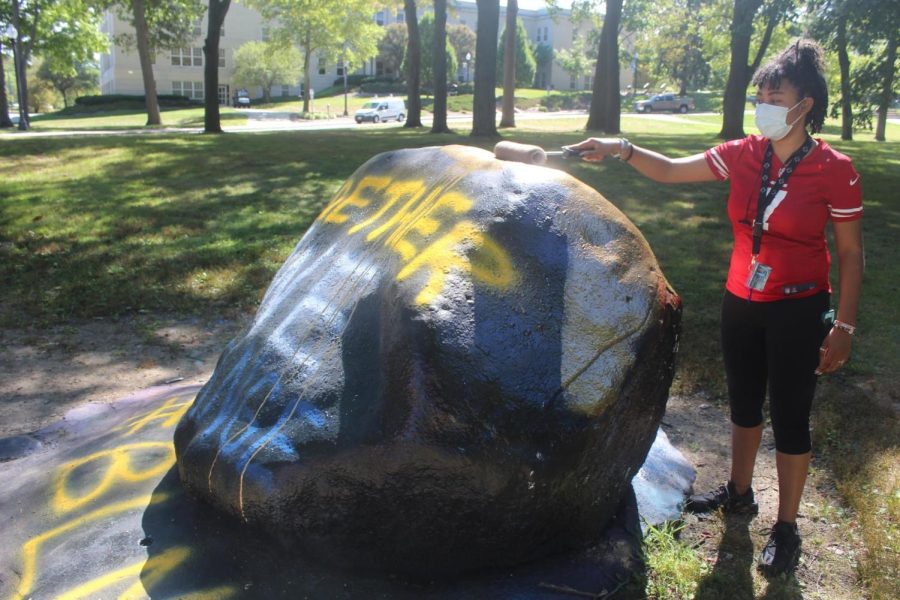 When the words “White Lives Matter” were painted on Kent State’s front-campus rock Aug. 28, Marteashia Thompson, president of Voices of Color, described them as “a direct threat to the Black students here on this campus.”

Spray painted in large, white block letters, the words covered slogans painted Aug. 24 supporting the Black Lives Matter [BLM] movement and commemorating those lost to police brutality. A variety of student groups joined together to quickly cover the controversial words, which the Anti-Defamation League defines as “a white supremacist phrase that originated in early 2015 as a racist response to the Black Lives Matter movement”. The individuals who painted the slogans over the BLM messages are unknown at this time.

Historically, the rock on front campus is an open canvas for anyone to paint messages, from remembrances of deceased students to slogans of civil rights movements such as [BLM].

Thompson, whose student-led political activist group advocates for voter registration and educates students about government, came out Tuesday to repaint the rock. She said the words “White Lives Matter” do not represent unity in the Kent Community.

“This isn’t an inclusive slogan at all,” Thompson said. “This isn’t something to uplift Caucasian Americans. This is only a term and rebuttal to the Black Lives Matter movement.”

She said that was why her group came out to paint the rock. “We wanted to put a very beautiful and positive image upholding our people, one that spoke to the unity of our organization as well as our community.”

In an email sent Wednesday to Kent State faculty, staff and students, President Todd Diacon stated the painting of the messages on the rock, along with recent incidents involving the shootings of Black Americans by police, “serve as glaring evidence that this university and our country need to do better when addressing racism and violence against Black Americans.”

Diacon also announced in the email a new Anti-Racism Task Force that will “explore all facets of racism at Kent State.” He stated the group will focus on anti-Black racism to start and then expand to “examine all areas of racism on our campuses.”  It will be led by Amoaba Gooden, interim vice president for diversity, equity and inclusion, Lamar Hylton, vice president for student affairs and Melody Tankersley, interim senior vice president and provost.

Subcommittees associated with the task force will recommend how Kent State can “eliminate the challenges and barriers that Black students, faculty, staff and others have faced at the university, with the goal of becoming a more diverse, equitable and inclusive institution,” according to the email.

The university also released an official statement Aug. 28 that stated “messages that are intended to be upsetting and hurtful are unconstructive and do not reflect our core values as a university.” The painting of the rock coincided with the first full week of classes on campus, although many courses will be taught remotely, so fewer people are present in person.

Controversy surrounding the rock and what is painted on it is not a new occurrence. During the 46th anniversary of the May 4 shootings in 2016, the rock was painted with the slogans “Cop Lives Matter,” “Shame on you Kent State,” and “no Rice,” in reference to Samaria Rice’s [Tamir Rice’s mother] invitation to speak during the commemoration ceremony.

Black United Students [BUS] president Tayjua Hines said she anticipated an incident like the rock painting would occur on campus given the BLM protests over the summer and the racial unrest that began after the death of George Floyd in Minneapolis. Hines said painting the rock with discriminatory words was only a surface-level act in comparison to the daily adversities students of color face on campus. She said she would not respond to those who painted the rock.

The rock was the meeting place for a BLM protest on June 6 against police violence. Hines was one of the leaders that day and she said while Kent students are hearing and understanding the movement’s messages, she said there will always be a small pocket of individuals who will remain ignorant. Every Black student at Kent State is a member of BUS, she said, and the organization is there to serve and protect Black students who feel threatened by these discriminatory acts.

A town hall will be organized in the near future to address the incident at the rock, Hines said.

Undergraduate Student Government [USG] President Tiera Moore said via Twitter Aug. 28 she is disappointed by the “defacing” of the rock. Some comments made in response to her post defended the use of “White Lives Matter.” Moore said she hopes those who do not understand the current movement can educate themselves.

“I hope those people can educate themselves on what [BLM] means,” Moore said. “Getting backlash on that tweet is something I expected and I hope those people can understand the significance of what this means, and as a community it’s not what we want to see. In the tweet, I said we are all Golden Flashes, and attacking each other is not what we should be doing right now. I think we should be focusing on being united as a community.

The anti-racism task force was originally discussed in early June and more details were provided Aug. 4 by Vice President for Student Affairs Lamar Hylton during a town hall. The task force will consist of faculty, students, staff and administrators and will examine 15 areas of university life, according to the email.

Troy Pierson is a general assignment reporter. Contact him at [email protected]