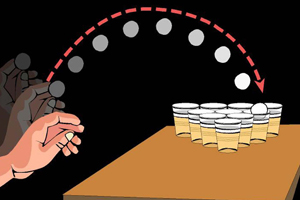 Stay tuned for Root beer pong in the Risman Plaza sometime before the end of the semester!

How to play: There’s two teams with two players on each sides of the table Set six or ten (preferably solo) cups up in a pyramid on both sides of the table Each team fills up two to three cans of root beer among your six or ten cups One team gets two balls, one for each person To figure out who goes first, one person from each team shoots at the same time making eye contact, and is not allowed to look at the cups. Whoever makes the first cup, that cup is not drank, that then determines which team goes first Each player from one team shoots the ball and tries making it into the cups

When a cup is made, the player from the opposite team drinks the root beer and pulls the cup away Each team goes back and forth until all cups are gone When there is one cup left, both players have to make it in that cup to win However, if Team A makes a cup, after team B made the final cup, it is called redemption or rebuttal When a team wins, the losing team must drink all the remaining cups on their side

Some tricks and tips: You can bounce the ball off the table into the cups to take away two cups If player A bounces the ball, and the opposite team hits the ball while it’s still on the table, player A gets to shoot again Some people play what’s called “on fire” and “heating up.” If you make two cups in a row, you are “heating up.” If you make three cups in a row, you are “on fire.” When you reach “on fire,” you shoot as many times as you can until you miss a cup If both players from team A make two different cups, it’s called “bring it back” and team A gets to shoot again If both players on team A make it into the same cup, it is called “death cup” Make sure your elbow does NOT reach past the table while shooting When shooting, if the ball rolls back to the person who shot’s side of the table, that player can shoot “behind their back” and attempt to make a cup When there are five cups or less left, each team is allowed one to two re-racks

Glossary of Terms: Rebuttal/Redemption: After one team has sunk the ball intro their opponents last cup; the opponents then get one more shot to save themselves Heating Up: When you make two cups in a row On Fire: When you make three cups in a row. Then you get to constantly shoot until you miss Bring it back: Both players from one team make two different cups. That team gets to bring it back and both shoot again Death cup: You shoot and the ball makes it into a player of the other team’s drinking cup. The game is ended after this shot (no matter how much beer is left over) and the losing team must chug all of it Behind the back: When shooting, if the ball rolls back to the player, they can shoot it behind their back and attempt to make a cup Re-rack: Depending on the rules, you are allowed one or two re-racks, respectively. You call for a re-rack when you have 6, 4, 3, 2 or even 1 cup left for a better formation. You cannot call a re-rack until it is your turn to shoot, and you can’t call one if you or your partner shoots. It has to be the very beginning of a turn

Definitions thanks to Urban Dictionary

**NOTE: Some rules differ depending on house rules!