Sophomore fashion design major has more on her plate 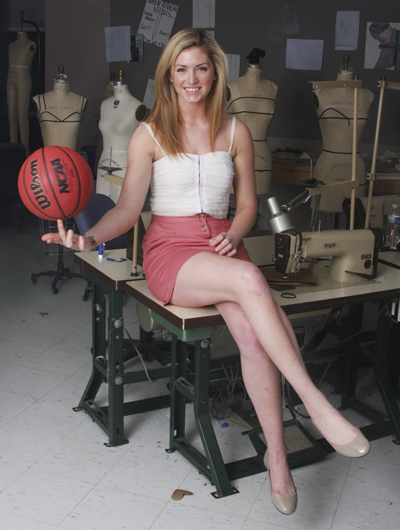 On the bus, Leslie Schaefer is frantically drawing a design for her fashion portfolio, trying to not let the bumps of the road disturb her.

Because she just got done with a basketball game, Schaefer, sophomore fashion design major and center on the women’s basketball team, has to prioritize more than other students.

Standing 6 feet 3 inches tall, she spends the majority of her time on the court in the paint, grabbing rebounds and blocking shots. But that’s not all she wants to be known for.

Schaefer wants to be known for her abilities as a designer. Although basketball and fashion are separate entities, Schaefer has found a way to fuse the two.

“It’s kind of an eye opener for some people because people really do think basketball players are tough girls who always wear sweats,” Schaefer said with a laugh.

She’s even become accustomed to being called the “girly girl” on the team.

Changing into a different person

In high school, Schaefer used to confuse the other team by smiling all the time and not trying to act like a tough player. After the opening tip, the opposing team soon realized she was tough.

“I just change into a different person,” she said. “It’s like ‘Transformers.’ I just transform into a beast.”

In college, Schaefer tries to act tough all the time. She tries to psych her opponent out in pregame.

“[Coach Lindsay] doesn’t have to tell me,” Schaefer said.

Schaefer’s tough play is a product of the built-up stress from her fashion classes and projects.

Because the two programs are very demanding, Schaefer sometimes struggles finding time for each. The studio is a place where Schaefer can be found late at night working on a project, which can take about 15 hours to accomplish.

Basketball practice consumes about three hours out of the day and about 25-30 hours a week. When she gets back to her dorm room for the night, it’s time to get to work, sometimes until 3 a.m. when practice is at 9 a.m. the next morning.

Love of both worlds

Kerrie James, Kent State assistant coach, is Schaefer’s academic counselor within the basketball team. Her main duty is to help Schaefer juggle her time evenly between fashion and basketball.

Schaefer attributed her dedication to both fashion and basketball to her love of both.

“That’s what motivates me,” she said. “If we don’t have practice the next day, I’ll be in the sewing room all night because I know I can just sleep in the next day.”

Designing is an art. Sewing and drawing take a lot of time, and Schaefer has considered herself an artist since she could pick up a pencil.

Despite bringing her work with her on the road, creating a quality project is still difficult. Sometimes Schaefer finds herself just throwing a project together in order to turn it in on time.

While she has two loves in her life, basketball will be over in about two years. Basketball ending isn’t the worst thing to happen, though. After graduation, Schaefer’s goal is to one day have a clothing line for tall women.

As one of the only fashion majors in Kent State athletics, Schaefer said she wants to be known for both design and basketball.

“I like how that makes me different,” she said.