Chafin’s slider makes him one of the best 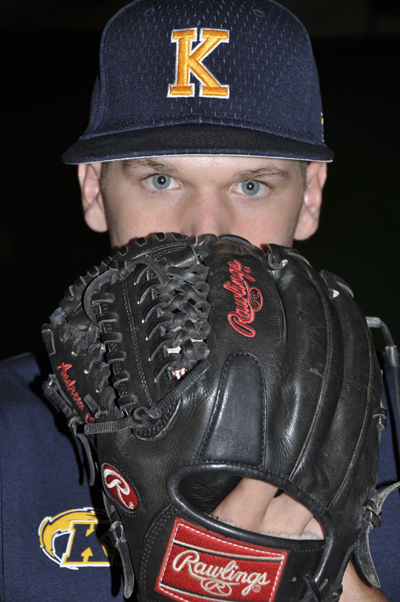 Sometimes Andrew Chafin can’t help but chuckle after watching a batter swing at his slider.

His coach calls it a major league pitch.

It’s a pitch that looks to enter the strike zone. Then it bottoms out into the dirt leaving no chance for the batter to make contact.

“I’ve played catch with Andrew enough to know (the slider) is a devastating pitch,” said pitching coach Mike Birkbeck. “Poor hitters start to swing at what he thinks is a fastball, and the next thing you know it’s got some tilt on it and the hitter is way out in front.”

The slider makes the starter one of the best pitchers for Kent State. Opposing batters have trouble hitting the lefty. His slider, paired with a 93 mph fastball is a rough combo.

Chafin has added a changeup to his pitching game too. The changeup was a product of a yearlong recovery journey. Chafin was forced into rehab from Tommy John surgery after experiencing an injury he suffered on May 8, 2009 when the Flashes were playing conference rival Akron.

In the first inning of the game, Chafin’s arm wasn’t right.

“I figured it would get stretched out and loosen up before the second inning,” Chafin had hoped.

“On the second pitch he grimaced a little bit,” Stricklin said.

“I had no feeling from my middle finger to my pinky finger,” Chafin exclaimed.

Chafin, a freshman at the time, wanted to stay in the game and continue pitching.

“I’m not one to give up on anything no matter how bad it hurts,” he said. “If I’ve got something I need to do, I do whatever I can to get it done.”

“In typical Andrew fashion he said, ‘I can get this guy coach,’” Stricklin said.

There was no way that Stricklin could leave his star pitcher out on the mound. It could risk further injury, which could have kept the pitcher from ever throwing again. The coach, as well as the pitcher, knew this injury was not going to fix itself.

Tommy John surgery was needed. The procedure involved replacing a ligament in the elbow with a tendon from his wrist.

This was tough news for the freshman. He was having a great season.

He was named to the Louisville Slugger Freshmen All-American Team, the ABCA Second Team All-Mideast Region and the First Team All-MAC.

He was just the third Kent State player, and first since 1992, to be named MAC Freshman of the Year.

Instead of sulking after learning surgery was needed, Chafin looked at it as a great opportunity. He had the chance to get stronger and learn a new pitch – a changeup.

A professional baseball career in the near future is plausible for Chafin. Chafin said he will enter the 2011 MLB Draft, but if he’s not drafted in the first or second round, he’ll be suited with a Kent State jersey once again next season.

“If he continues the way he has the rest of the season, I think he’s going to put himself in a very attractive situation without a doubt,” Birkbeck said.

Rehab, though, was boring.

Chafin didn’t feel any pain throughout the process, except for the first couple of days following the surgery. At times there was discomfort, but it would never hinder his goal of returning stronger than he was prior to the surgery.

“I never had any doubt that I would come back stronger than before,” Chafin said. If I want to accomplish something, I can accomplish it.”

This type of mindset helps Chafin compete at an elite level.

Accomplishing effective pitching sequences is easy for Chafin during games.

The southpaw can be effective by overpowering a batter, hitting the corners with pin-point accuracy or using his demoralizing breaking balls.

“It depends on the day,” Chafin said.

“He’s truly a blend of a power pitcher and a commanding control pitcher,” Birkbeck said.

When Chafin’s pitches are on, and he’s striking out batters, it’s an emotional rollercoaster.

“It’s a phenomenal feeling,” the technology major said. “Your motor gets going, and you just want to throw harder on your next pitch.”

Recently, Chafin has been experiencing this phenomenal feeling quite often. He’s stronger and is pitching at an elite level. All thanks to Tommy John surgery.

“He’s better now than he was before the injury,” Stricklin said. “That’s a testament to how hard he worked.”

It’s evident in his pitching.

After 22 months away from live pitching at Schoonover Stadium, Chafin returned with a complete game shutout performance against Toledo on March 25. It was Kent State’s first shutout in two years.

Chafin threw 88 strikes out of 113 total pitches. He struck out a career-high 15 batters, while giving up just four hits and walking no batters.

He’s had success against nationally ranked teams too.

Against No. 23 Louisville on March 4, Chafin saw great success from his favorite pitch: the slider.

“There were multiple occasions where I would strike people out bouncing the ball two feet in front of the plate,” Chafin said. “They would just look like complete fools out there.”

Chafin threw seven scoreless innings, with a no-hitter running through five innings against the nationally ranked team. Louisville won the 11-inning game with a 3-2 victory.

Chafin allowed just one hit, and struck out 10 batters.

Performances like this give the redshirt sophomore a great stat line this season. His ERA is just 0.53 over a 33.2 inning span. Chafin leads the Flashes with a 3-1 record.

“He’s as good as anyone we’ve had in a long time,” Stricklin said. “It hasn’t mattered who he’s faced. He’s been dominating.”