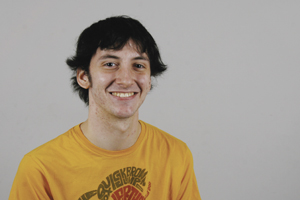 Nick Glunt is a senior magazine journalism major and columnist for Daily Kent Stater. Contact him at [email protected]

When I decided to study abroad in Florence, Italy, I never would have guessed one of the cultural differences I’d encounter would be as simple, convenient, yet utterly beneficial as hanging my clothes to dry.

Our apartment here came with a washing machine, but no dryer. Instead, it came furnished with a clothesline and drying rack, capable of holding a full load of clothes for air-drying. And as annoying as it is to wait twelve hours for my clothes to dry, the message behind it is anything but. Italy relies on foreign sources for 90 percent of its energy. Thus, electricity is expensive. As a result, the culture has adapted to ways of saving energy — therefore, saving money.

Our landlord advised us to turn off the lights every time we leave our apartment to avoid a charge at the end of the semester for above-average use of energy. She also explained that Italian homes are capable of utilizing a much smaller total wattage at a single time — meaning the fuses can be blown much easier — in an effort to cut down on energy consumption.

Though the U.S. doesn’t suffer quite the same energy situation as Italy, I think there’s an important lesson to be learned from this. After all, the Italians’ idea of conservation expands beyond just electricity.

Our landlord told us Italians typically take very short showers so as to not waste gas. (Apparently it’s an American stereotype that we all take obnoxiously long showers.) They even have levers next to most, if not all, gas stoves to turn off the flow of gas while no one’s using them.

Even recycling is a big deal: They’ve got Dumpster-like recycling bins next to every one used for trash, and most cafes and delis have a can for organic waste, paper and plastic.

Though saving money is an important issue to many who utilize the system, it certainly doesn’t hurt that we’re saving resources and ultimately our planet.

I never realized before coming here just how wasteful I am, but now it’s hit me. As long as I’m here, I’ve really got no choice but to conserve — but once I get home, I think it will stick with me.

I mean, it’s as simple as flicking the light switch when you leave a room — even if you’ll be gone for just a couple minutes. It’s not that hard. Sure, some things are inconvenient, but we can try to adapt. After all, I’m pretty sure our planet’s sustainability is more important than our overall comfort.