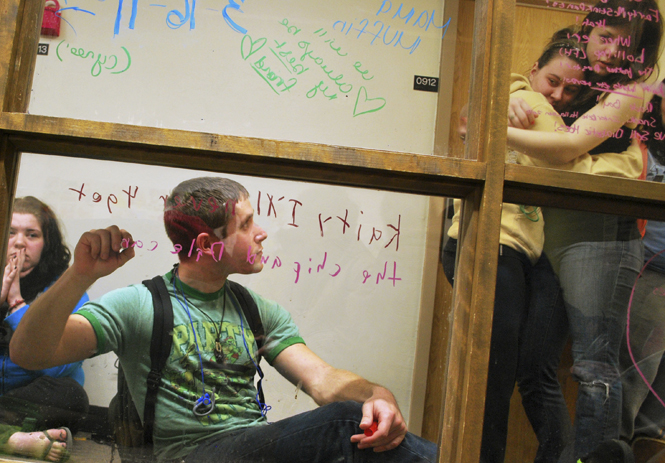 Freshman Evan Cerveny talks to Cyree Tenney and Jacquelyn Kotlarsic about Kaitlyn Nicole Jones during her vigil Wednesday on the ninth floor of Koonce Hall. Photo by Philip Botta.

Jason Grom, forensic investigator at the Summit County Coroners office, said she died of natural causes. He said that she had vascular malformations that caused head bleeding.

Jones started to feel sick on Sunday and was taken to Robinson Memorial Monday afternoon by paramedics. She was later life flighted to Akron City Hospital Monday night. Akron City Hospital will likely perform a medical autopsy to determine more details about the cause of death.

Kevin Koppel, graduate of Virginia Marti College of Art and Design, had known Jones for one year. He said he took Jones to the emergency room six times last semester for diabetes related problems.

He joined other friends of hers Wednesday afternoon in the ninth floor Koonce Hall lounge to share stories of Jones, who was a resident of Koonce. Students wrote messages and memories of Jones on the windows of the lounge. Kent State University provided the students with therapy dogs and counselors.