Leading with a strong work ethic 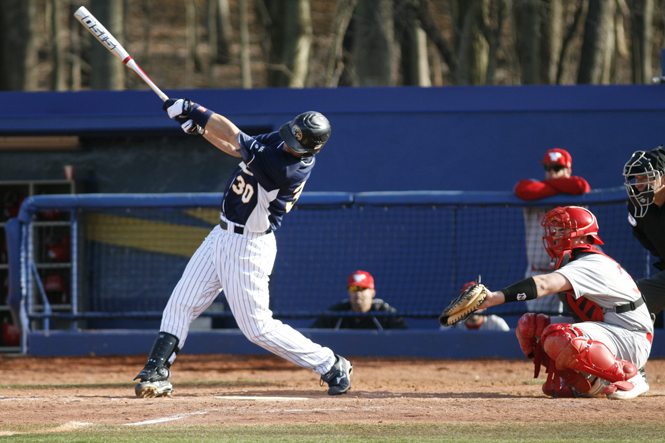 Everyone jogs except for one: senior Ben Klafczynski.

“See there, guys,” Scott Stricklin, Kent State baseball coach, yells at his team. “Look at Klaf sprint off the field. That’s why he’s a captain. Sprint in. Sprint out.”

“He’s a lead-by-example type of guy,” Stricklin said afterwards of his right fielder and third batter in the lineup. “He’s not a real boisterous type of guy. He plays the game hard and leads by example — our players respect that.”

Senior left-handed pitcher Kyle Hallock, both Klafczynski’s teammate and roommate, said Klafczynski “knows what has to be done and just go out and does it. You won’t hear a lot of vocal things from this team, but you’ll see a lot of things happen with this team because they follow Ben’s example.”

Klafczynski said he carries a good work ethic in order to show what it takes to be successful at the college level.

“I think that’s what you need to do as a leader,” Klafczynski said. “Show the younger guys how it’s done. I’m trying to show them what it takes and the amount of work you need to put into it to succeed.”

Stricklin said the team notices his hard work, and respects Klafczynski because of it.

“He was voted captain by his teammates,” Stricklin said. “He’s the guy our younger players look up to. He’s what you want your senior captain to be on and off the field. He works very hard off the field, and it translates to success on the field.”

One of Klafcynski’s better games came against Winthrop on Feb. 27, as he went 3-for-5 at the plate, batted in three runs and scored three times for the Flashes 8-6 win over the Eagles.

Klafczynski’s performance that weekend earned him his second Mid-American Conference Player of the Week award in just as many weeks.

“Ben’s contributed a lot to this program on and off the field,” Hallock said. “He’s a good student and good role model for people. You take Ben Klafczynski out of this program — you’re missing something.”

Stricklin did not want to think about losing Klafczynski, both for his offensive numbers—batting average (.465), runs (12), hits (20) and tied for lead with home runs (2) and runs batted in (10)—and for his leadership.

“He’s been in the middle of our lineup most of his career,” Stricklin said. “He’s a big part of our offensive attack. He’s a huge part of our team and a guy who is going to be a candidate for Player of the Year in our conference. Certainly, we’re looking forward to him having a great senior year.”

Klafczynski now leads the team to Conway, South Carolina, where the Flashes will face Coastal Carolina, UAB and Notre Dame this weekend in the Caravelle Resort Classic.