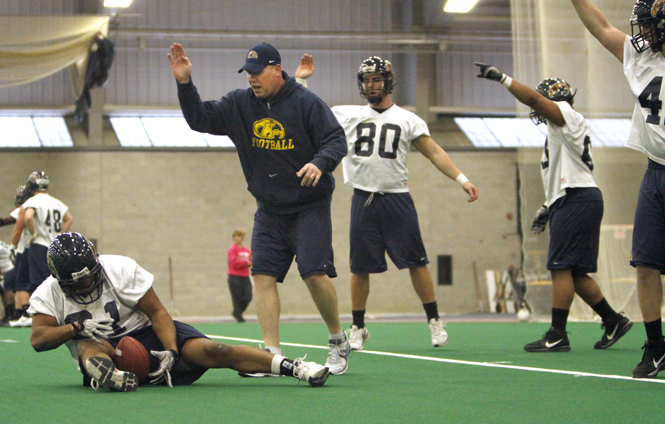 The defense responded by walking towards the sideline.

“There is not a day on this Earth that you walk off this football field,” Heacock yelled.

Led by defending Mid-American Conference Defensive Player of the Year sophomore defensive lineman Roosevelt Nix, the defense outperformed the offense in yesterday’s seven-on-seven and 11-on-11 drills.

The defense reached the Flashes’ quarterback untouched on several plays, and defensive backs broke up passes on a regular basis.

While Heacock is well aware of the inexperience that his defensive unit has to overcome, he expects his players to overcome that stigma.

“We need to be up tempo, fast-paced and competitive at all times,” Heacock said. “We want to play with emotion and at the same, be disciplined about it, getting in the right gaps and staying in the right zones. We will approach every practice as if we’re going against a no-huddle offense.”

When asked about last year’s unit, Heacock stressed how impressed he was with the way they performed and hopes to use a similar system with his team in the 2011 season.

“I don’t think it’s going to be a lot different,” Heacock said. “We’ll have some different schemes and do some different things, but the goal is the same as it has been for these guys and that’s to be the number one defense in the conference and ultimately win a MAC championship.”

While he has the disadvantage of entering his first year with a depleted linebacking corps, Heacock has the advantage of having a high-caliber player like Nix.

The 6-foot, 240-pound defensive lineman did not start one game last season, but consistently obstructed the rhythm of opposing offenses.

He led the conference with 20 tackles for a loss, and ranked 11th in the country with ten sacks.

While players can struggle with early success in their college football careers, Heacock has been impressed with the way Nix carries himself in his second season on campus.

“What I like most about him is an eagerness to learn,” Heacock said. “I’ve been really impressed with him as a young man. I see him studying film, and he wants to continue to get better. I think he’s handling success the right way. He’ll continue to get better as long as he accepts coaching like he’s doing right now.”