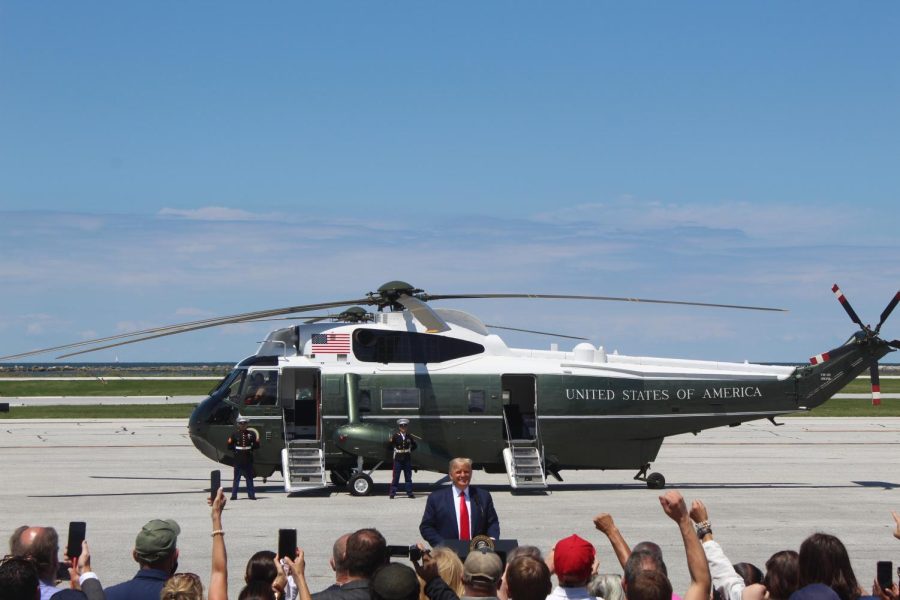 Presidential campaigns from incumbent Donald Trump and challenger Joe Biden held events in Ohio this week but took different approaches to reach voters in preparation for the November election.

Trump visited Ohio Thursday afternoon by landing at Burke Lakefront Airport in Cleveland, touching down at 1:30 p.m. on Air Force 2. He was greeted by over 100 supporters as he spoke on a variety of issues surrounding the coronavirus, his opponent Biden and manufacturing in Ohio. Trump wished Ohio governor Mike DeWine well as he had tested positive for COVID-19 just prior to meeting the President for his arrival. DeWine has since tested negative for COVID-19 after taking a second test.

Trump gave Hagan his endorsement via Twitter over the July 4 weekend and echoed that endorsement in person yesterday afternoon. Hagan said she was surprised and excited for the President’s endorsement and described her campaign and values when challenging her opponent and Democrat incumbent Tim Ryan.

“My campaign boils down to a direct contrast to my opponent [Ryan], who has accomplished next to nothing in his 18 years of service,” Hagan said. “I served eight years in the [Ohio] state legislature [and] never backed down — just like the president — to anything that would be deemed controversial, but fought hard for the people I believe in; championing things like presumptive care for firefighters and looking for certified apprenticeship programs for students and finding ways to promote and excel the trades in opportunities that wouldn’t burden our future with debt.”

After his arrival and speech in Cleveland, Trump took a helicopter ride via Marine One to the Whirlpool Plant in Clyde, Ohio to give another speech on returning manufacturing jobs to the state and country.

Trump made his final stop at the Shoreby Club in Bratenahl for a fundraising campaign, which was closed to the press. On his way to the club, the presidential motorcade passed a number of supporters and protestors demonstrating alongside the road, with heavy police security present.

While Trump and his campaign choose to physically represent themselves for election season, Biden’s campaign has chosen to limit their group’s physical appearances due to the COVID-19 pandemic. This includes events in Ohio, as Biden’s campaign held a series of virtual roundtable discussions throughout this week in Kent, Chillicothe, Lima and Cleveland. The roundtables focused around manufacturing in Ohio and how different businesses were affected from economic and legislative circumstances brought about by the Trump administration.

The roundtable today in Cleveland was facilitated by Ohio senator Sherrod Brown, who conversed with workers in the automotive industry, an entrepreneur, a newspaper editor and a union worker at a call center. Brown conversed with each panelist about the importance of their jobs, and specifically discussed the auto industry and how the Obama administration assisted companies like Chrysler and GM to keep manufacturing jobs in Ohio.

During the roundtable meeting, United Auto Workers Local 2000 The Vanguard editor Ty Granakis spoke on the successes of Biden and Obama’s administration that helped rescue Ohio auto jobs during the 2008 financial crisis, and how he is confident the Biden administration will continue those efforts to protect those occupations.

“Biden was part of an administration that defended the auto industry when there was a resounding cry of ‘let Detroit fail,’ and they [the Obama administration] did anything but, ” Granakis said. “I was really grateful for the continuation and retention of the auto industry. . . . From 2009 to 2011, people ignored the banks that were getting the free handouts and paid all the attention to the auto industry getting loans. I think he [Biden] takes the auto industry seriously, he realizes that [it is] the backbone of the country, and we’re going to be all right under that administration.”

Ohio is considered a swing state, and will stand as a key area for the presidential election in November. According to recent polls, Biden leads Trump 46 percent to 42 percent in a state Trump won by eight points in 2016. The first presidential debate will be held in Cleveland on September 29 at Case Western Reserve University’s Health Education Campus.