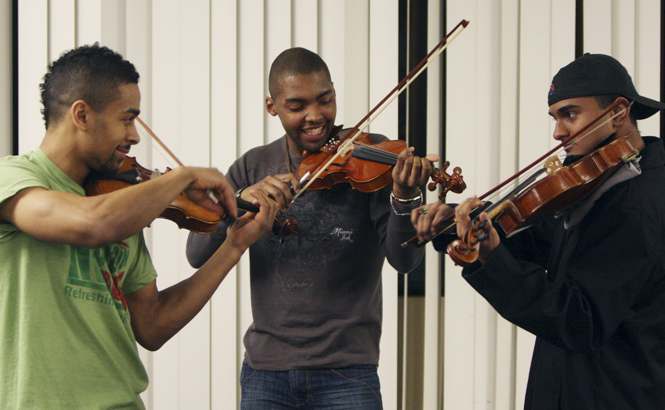 Reverberating around Tri Towers rotunda and resonating through Rosie’s Diner, the sound of violins Monday night turned heads and made passersby reach for chairs.

?“We get a lot of people that walk by and say good job — or watch for, like, five minutes,” said Varun Nagarajan, freshman pre-med biology major and viola player.

?Nagarajan is one of three students at the core of an improvisation music group who have picked up instruments this semester.

?The group was a brainchild of Wael El-Halaby, senior public health major and violinist, who said he feels like the music is helping, motivating and inspiring people.

?“We motivate people to go out there and do their own thing and not worry about sounding bad,” El-Halaby said. “A lot of the time when we play, people just jump in and play an instrument they haven’t played in years or play something they’re ashamed about playing.”

?He said a Chinese guitarist he regularly plays with was shy to play in front of other Chinese people at first.

?“I broke him out of that, and now he will play in front of anybody,” El-Halaby said.

?He said the group has played with “random people walking by” who have had trumpets, electric and acoustic guitars, flutes, bass and even a drum made out of a drawer.

?“It’s really fun for us, but it’s also fun for us watching other people have fun,” he said.

?One day in the Student Center, El-Halaby said a student approached him and said he had been stressed from school and couldn’t focus on his homework until he heard the group play.

?“Immediately his stress was relieved, his headache went away and (he) was able to concentrate just by hearing us play,” he said. “Hearing shit like that — that’s inspiring to us, so we continue doing what we’re doing.”

?“He’s the most spontaneous, random person,” Lewis said. “So (the group) started with him. One night, he said, ‘Let’s go play instruments or something.’ I’m like, ‘Okay.’ I was bored.”

?Lewis, a violinist, said he is also a practicing psychic, the first in his family to come out publicly and use his talents professionally.

?He said he started right after high school with helping law enforcement in missing person cases but found the job was too stressful.

?“Most people who are missing (end up being) murder cases,” he said. “It was too much. So now I just do regular readings and give people advice.”

?However, Lewis said he likes to keep his musical and spiritual talents separate and doesn’t like to advertise his psychic business like his music.

?“I like people to find out on their own,” he said.

?Nagarajan said the group’s sound is a mixture between structured performance and complete improvisation. They needed to gain a little confidence and familiarization with the music beforehand, he said.

?“When we first started improvising, we didn’t even know where to start,” he said. “You can’t just go out and play random notes, it won’t sound good. Once we had some kind of plan (and) a real beat, I was familiar with how to perform.”

?But El-Halaby said improvisation is equally as important to their sound.

?“It feels better to improvise because it’s more fun that way,” El-Halaby said. “Whatever we play, we can’t play again because it’s all over the place. It’s coming from your inner heart because you’re making it up yourself.”

?He said the group is not looking for money and turned down an opportunity to play in the library because money was offered. Instead the group performs for personal enjoyment.