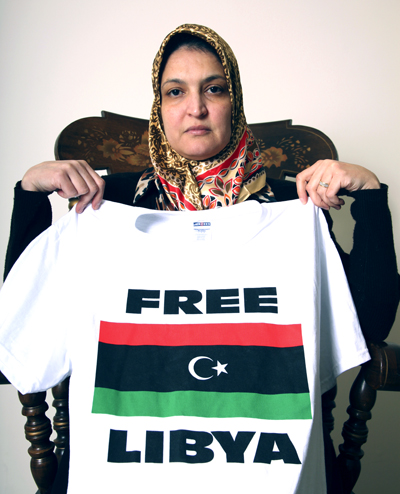 View Libya in a larger map

Hundreds of people have died in Libya since conflicts over civil rights began about a month ago, and Kent State student Amal Laba said she fears the death toll will climb.

Laba, a graduate curriculum and instruction major and Libyan native, said she cries every time she sees people from her country being shot on the news.

“I keep thinking of the rest of them and when this will stop,” Laba said, “because every hour means many people are shot and killed.”

Laba said she also has family living in the chaos.

Her mother and father live in Tripoli — close to where President Moammar Gadhafi is barricading himself. Laba said because her parents are older, they are not out in the streets along with the other thousands of protestors. She also has a brother living in Tripoli with his wife and children, and Laba said they were forced to leave because of shootings near their home.

“They are terrified,” she said. “They are hearing the sounds of weapons and bullets every night.”

Laba said the streets in Tripoli used to be very busy, and it would take more than an hour to pass through the crowds. But now, Laba said most people stay inside, referencing a Facebook page that shows pictures of the bare streets.

She said the protesting began in mid-February and has spread to almost every city in the country. And in each city, there are thousands of people protesting.

She also said planes are constantly flying over the country, and there are security checks at every street.

“Most of the world knows what’s happening there — killing innocent people, using planes, using weapons,” Laba said. “They see everything on TV — the dead bodies on the streets, even in my city.”

Laba said she heard from her family that no one has the courage to go outside and get the bodies because of the constant gunfire.

As for the violence in surrounding countries, Laba said she does not think the protests in Egypt or Tunisia directly caused the protests in Libya, but they may have encouraged people to fight for their rights.

The Egyptians and Tunisians are supporting the Libyans through the borders by providing medicine and care to the injured, she said, but Gadhafi’s soliders, according to ABS-CBN News, have restricted passage to Tunisia for Libyans fleeing from the violence.

“The president does not want to admit that there is something going on, except that there are young people who are taking heroin are doing silly things. He is convinced that they want to destroy the country,” Laba said.

Laba said she hopes that this will all end soon. She said she fears the president will allow planes to begin shooting at people protesting in the streets, and she is afraid he might shoot petroleum oil plants, which would cause mass destruction and large fires.

Gadhafi has already used warplanes against protesters and has bombed several oil ports that were occupied by anti-Gadhafi rebels, according to ABS-CBN.

Laba said she wants to help her people by giving her blood since there are a high number of injuries, and she is upset that she can’t help.