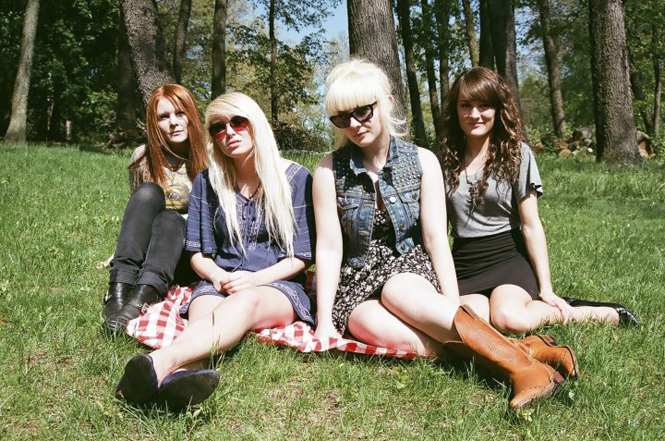 As if these little girls can play.

That’s what the members of the band want you to think before hearing them, just so they can prove you wrong. And rest assured — they will. Hence their band name, As If.

When walking into the home of Abby and Carly Powell, nothing about the band’s practice space indicates an absence of male members.

Amps, microphones and cables line the floor. The shelves are stacked with vinyl records — anything from David Bowie to Led Zeppelin.

One of the band’s singles

Photographs of Ted Nugent and The Beatles grace the walls next to a Budweiser neon light and a disco ball.

As an all-girl rock band from Green, Ohio, the four members realize that they play in a typically male-dominated genre, but that acts as a motivating agent.

“After people hear us play, they realize they shouldn’t have been thinking that,” said Abby Powell, junior exercise science major at Kent State’s Stark campus. “It’s fun rock ‘n’ roll. We get psychedelic at times. We’ve heard people describe it from Black Sabbath-esque to what KISS should have been.”

Even in high-heeled boots, Abby Powell’s petite stature barely surpasses five feet. But when she sings, her vocals thrust weight and power reminiscent of Joan Jett or Pat Benatar. Her twin, Carly Powell, a sophomore at Kent State Stark, plays intricate guitar riffs that demonstrate a high level of skill.

Abby and Carly Powell met Lillis in middle school ski club. What began as a “blind friend-date,” arranged by their parents, became a life-long friendship and the start of their first band, either/origami.

“The only thing my parents didn’t force me to do was play music,” said Lillis, senior English major at the University of Akron.

“They made me join, like, every club under the sun, except they didn’t make me play music. And it turned out that was the only thing I was into.”

either/origami had a classical sound that the girls later described as pretentious. The band disbanded in the summer of 2007. In February 2010, the girls formed their current band, As If, with an entirely new sound and later added a new member, McCoy.

The group’s rock ‘n’ roll image is no act; the girls said it reflects their own tastes and music comfort zones. Although their music interests tend to overlap, each girl has her own influences. Lillis said the band Television impacted her drumming style, while McCoy said Sonic Youth shaped how she plays guitar. They all agree that The Entrance Band inspired the entire sound of As If.

“Whatever we hear gets filtered into it and just sort of pours out,” Carly Powell said.

The group collaborates during the creative process. Each member contributes to writing songs, and often they rely on each other to help finish what they’ve started.

“It couldn’t be one without the other,” said McCoy.

Over the years, Lillis has pursued other music opportunities. She toured with Jessica Lea Mayfield and, with Mayfield, has opened for The Black Keys. But she said As If is like her family.

Each member is enrolled full time at universities, but they said the band is their priority. The girls hope to push As If beyond local venues and further into the music realm.

This spring, they plan to record an EP or full-length album. If their finances hold out, the girls also plan on touring.

“We want to take it as far as it possibly could go,” Carly Powell said. “And just to have as much fun as possible.”