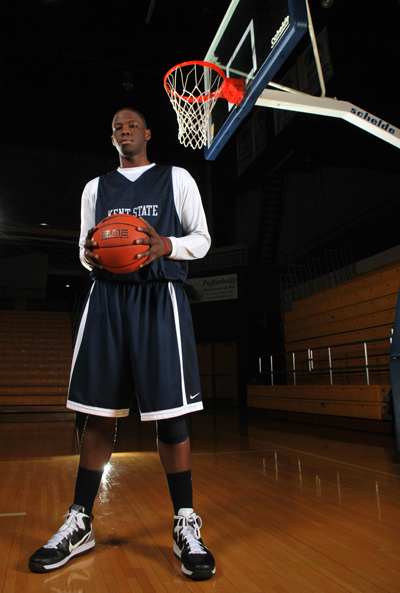 From the start of the season, it was obvious that Justin Greene would be a determining factor in whether the Kent State men’s basketball team would succeed or fail.

At the start of the season, the Flashes were an inexperienced team with only three returning players: sophomore guard Randal Holt, senior guard Rod Sherman and junior forward Greene.

Holt, who rotated time at the point guard position last year, is a crucial part of Kent State’s outside game. Sherman, who has been the leader of the squad from the start of the season, brings an explosive playing style to the court that leaves defenders clueless as to whether he’s going to spot up for a jump shot or drive to the hoop.

But without Greene’s powerful presence in the post, Holt and Sherman would have a tough time running the offense.

Greene leads the Kent State offense that strives on working from the inside out.

Although he is a dominant piece of Kent State’s winning formula, Greene also leads the team in turnovers, with three per game, and personal fouls, with 2.6 per game.

But since Greene is an integral part in the team’s offense, turnovers will happen, and with Greene posting up against the big men on opposing teams, the personal fouls are bound to add up.

Using his skill on both the offensive and defensive sides of the court, Greene has racked up a Kent State record five MAC Player of the Week Awards this season, adding to the three he received last season.

At the World Vision Classic at Cleveland State, the Kent State men’s basketball team finished 2-1, while Greene led with 18.3 points and 7.7 rebounds per game. At the season opener against Iona, Greene matched a career high with 26 points, while setting a career-high 14 rebounds.

A little bit of second-half magic helped Greene capture his third MAC Player of the Week award. En route to earning his sixth player of the week award in just two seasons, Greene recorded 15 of his team-high 21 points in the second half as the Flashes took down Youngstown State on Dec. 21. He also posted 10 rebounds, along with two steals and a block.

After finishing with a team-high average of 17.5 points and 5.5 rebounds against Bowling Green and Ohio, Greene became the third player in Kent State history to have four MAC Player of the Week Awards in one season. The other two: Al Fisher (2008-09), and Chris Singletary (2009-10).

As Kent State finished 2-0 in the week prior, Greene averaged 16 points, 9.5 rebounds, 2.5 blocks and 2.5 steals in the two wins for Kent State over Ball State and Toledo. The award marked the first time in Kent State history that a player earned five MAC POW Award’s.