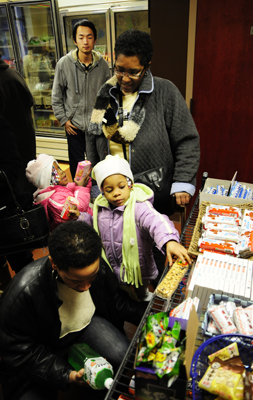 Kent State international students will no longer have to trek to Cleveland to get the beloved food products that remind them of home.

Alkhadda teamed up with Genia Kollie, sophomore Nick Testa and senior Crystal King to bring this unique store to downtown. The Center for Entrepreneurship and Business Innovation provides students the opportunity to gain experience by opening their own businesses.

“We figured, what better way for people to learn about other cultures than to do what everyone has to do every day: eat,” Testa said.

The store started its soft-opening in November. Testa said the four owners put in some of their own money to begin the business and then made a presentation to investors for the remaining funds.

Kollie said that since November, the owners have been gathering information and accepting requests from international students about what they would like the store to carry.

“First we started off with Middle Eastern and Asian. Now we have Russian and Mexican products as well,” Kollie said. “The more requests we get, the more products we’re able to get for customers.”

Some products available at the market include Asian and Middle Eastern spices, rice, noodles, dumplings, chocolate, cheese and Halal meat for Muslim students. As well, the store sells cologne, scarves and bags made by Bhutan refugees.

Alkhadda, who hails from Kuwait, said going to the market is different than going down the international aisle at the supermarket.

The owners plan to expand services and products to appease the high demand from customers. King said they hope to expand their merchandise to special cologne, hair care products and lotions, while Testa mentioned providing a grocery delivery service to students on campus.

“It’s an idea that’s never been done before on a campus,” Testa said. “In the future, we want to try to franchise so that other campuses in the same situation could benefit.”

At the grand opening, the owners stayed busy talking to customers and organizing activities like a raffle and a chopstick competition. Around 7:30 p.m. patrons released sky lanterns in honor of the Chinese New Year.

“It’s been really busy all day,” King said Saturday. “I’m not surprised about the turnout because people are excited about us being here.”

Testa said the original business plan for the market was to reach out to international students first and then expand to the American population within the city.

“It was really surprising; the residents from around Kent came in a lot quicker than we thought, and we’ve gotten great feedback,” Testa said.