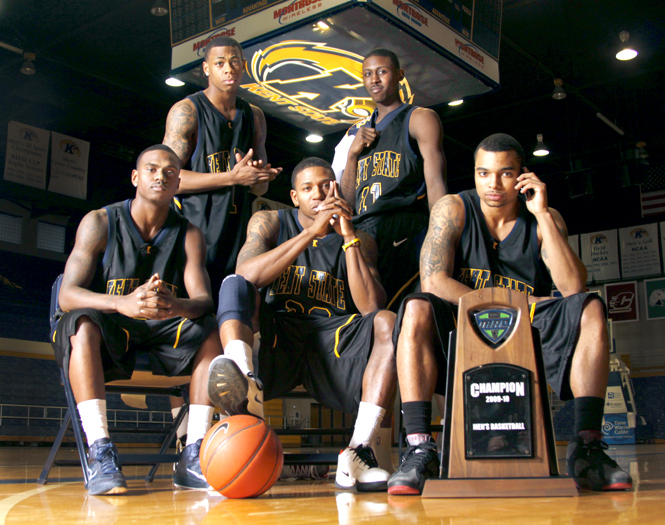 The 2010 crime drama “Takers” follows five professional bank robbers who bring their individual strengths together to complete their missions in the most effective – and badass – way possible.

Similarly, all five guards on the Kent State men’s basketball team each play their own role to contribute offensively and defensively.

This meshed coordination has propelled the Flashes (15-7, 6-2 Mid-American Conference) to first place in the MAC East and will show up in tonight’s game against Eastern Michigan at 7 p.m. in the M.A.C. Center.

RJ: Do you feel like the guys from ‘Takers’?

MP: In the movie, whatever they wanted was a prize. They took it, and nobody could stop them. Any one of us at any time could take over the game in our own way.

RH: I do feel like that sometimes. We are one group, but we play off each other.

CG: We all have individual strengths, but when we’re together, it’s one big BOOM!

CG: I don’t know what my particular strength is, but I’ll say scoring or play-making. As many threes as I hit, I don’t think I’m that good of a shooter.

RS: I’m not the muscle? Well, I’m like the universal remote. You can point me at anything, I’ll work.

CG: I think (Sherman) does it all.

RS: No, I can’t do it all – but I do a little bit of everything. That’s why I said universal.

RJ: How would you describe the guards as a unit?

EG: Dangerous. Nobody can stop us.

RH: We’re feisty – in a tough way, not a feminine way.

RS: We gel really well. If you see the games, it’s like four guards and one big man, so we play off each other and feed off each other.

MP: You wouldn’t know that all of us just met each other this year. The way to summarize it is brotherhood. As long as all of us are playing well, we have nothing to worry about. If one of us is having an off night, someone will step up.

CG: Every one of us has something we’re really good at. For example, I’m not a great defender, but Eric helps me out because he’s great at that. Eric may not be a great shooter, but when I’m on the court, I help him out. We balance each other out.

RJ: Of the two big quotes in the movie – “Bet big, win big” and “Business is business…I never said we were friends,” which one describes the Kent State guards?

CG: “Bet big, win big.” Well, and (the second quote). That’s kind of how it is on the court, though. I may be friends with a player on the other team, but on the court we’re all business.

RH: I feel like it’s business on the court, but it escalates to a friendship. We have each other’s back on and off the court.

RJ: How has “the family” been doing this season?

MP: I think we’re doing OK. We’re starting to understand each of our roles. For the rest of the season, it’s going to be a good, fun season. (It) should be exciting.

RJ: What do you want to see happen?

RH: I want to see us win the MAC and go to the NCAA tournament.