Do U Herd? campaign aims to change students’ opinions about drinking 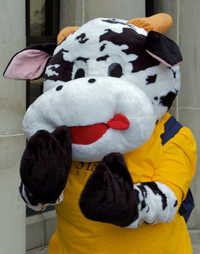 Henry Herder is the mascot for Do U Herd, a program aimed to promote critical thinking when it comes to life choices such as alcohol consumption. Photo by Anthony Vence.

You might have seen Henry Herder at campus events, but he isn’t the average Kent State University student: He’s a cow mascot and the face of Residence Services’ Do U Herd? campaign.

Do U Herd? is a campaign to get students thinking critically about decisions they make involving alcohol. It is different from many other drinking campaigns on college campuses. Other campaigns share statistics or inform students about the consequences of underage and high-risk drinking. Marquita Rodgers, residence hall director of Prentice and Dunbar halls, said the main distinction is that this is a critical thinking campaign, which asks students to explore the reasons why they drink.

“Our message is not telling students to not drink because we cannot tell them what to do,” Rodgers said. “Our message is to give some thought as to why they are drinking, whether or not it is a decision you are making on your own or if there are some influences in your life that are helping you to make those decisions. Basically, we want students to say ‘I have given thought to my attitudes on drinking and as a result of that I can clearly say my choice is my choice and not someone else’s.’”

To learn more about the Do U Herd? campaign, click here

Henry Herder is the mascot of Do U Herd? because cows tend to travel in herds or groups and like cows students tend to follow a leader and not stand up for their individual ideas.

In the campaign, Henry is a first-year student at Kent State. He lives in Tri-Towers, has roommate issues and made some poor decisions.

“We want Henry to be a voice of first-year students to show them that they are not the only ones going through the transition,” Rodgers said. “As first-year students, you are going to make some decisions that if you had to do it over again, you might not make. But that’s okay. That is part of the learning process in college.”

Henry participated in many events on campus last semester, including Sextober Fest and Quad Fest with Stopher, Johnson, Lake and Olson halls. He was like any other freshman, playing “Rock Band,” winning a goldfish and hanging out with other students. He will be participating in many different campus and hall events this semester. He also has Facebook and Twitter accounts, as well as a Facebook fan page.

“Frank was the one who came up with the concept of looking at how we can get students to think critically about choice-making,” Joseph said. “He sort of formulated the initial ideas and tried to do it in a way that would hopefully catch people’s attention with the mascot, Henry Herder, and have students looking at their behavior of following the herd.”

The goal of Do U Herd? is to reach as many students on campus as possible, especially those living in residence halls, and for students to know about Henry and be aware of his message.

“I think students in large want to make good decisions and want to be successful,” Joseph said. “This campaign is focusing its attention on something that is hopefully of interest, we believe has an impact on students and will have them develop a skill that will help them with the rest of their lives.”

To learn more about the Do U Herd? campaign, click here