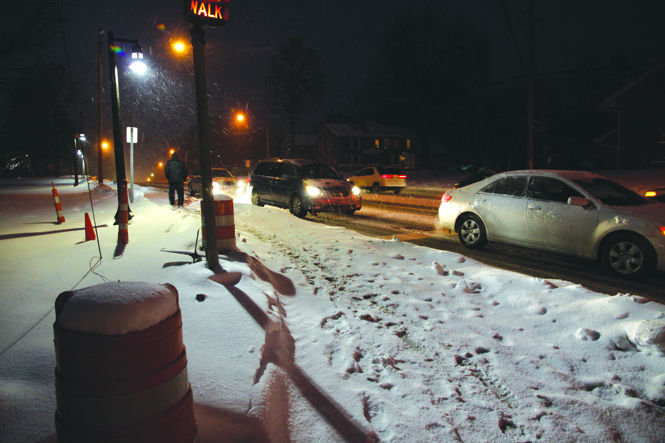 Many students were ready for a break from the stress they endured throughout last semester. The only things left for them to do were to take their final exams. But the weather that soon appeared put a halt to many students’ and faculty’s plans.

Last semester school was canceled for the first time in at least 30 years during finals week (as far back as could be found on record), said Greg Jarvie, vice president for Enrollment Management and Student Affairs.

A total of 22 inches of snow fell on Dec. 13 and 14, according to the National Weather Service. Exams on those days were pushed to the following week on Dec. 20 and 21.

Many professors were very accommodating to students and did what they could to give students a chance to make up their final without it interfering with their plans. However, some students did not have that benefit.

Samantha Tallon, sophomore fashion design major, had to spend many days on campus waiting to take her postponed exam.

“My professor didn’t offer any alternatives for a makeup exam,” Tallon wrote in an e-mail. “In fact he didn’t even communicate through email what would happen after exams were cancelled. This caused quite a bit of confusion among the 150-plus students in the class.”

The inconvenience of scheduling finals affected professors as well. Biology professor Gail C. Fraizer had to cancel her holiday trip due to the rescheduling.

“Our trip to Florida was cancelled as we expected grades could not be compiled till Dec. 26 (and would have missed our window for the trip),” Fraizer wrote in an e-mail.

Fraizer said she emailed all 150 students and determined that most could fit in their makeup exams on Thursday. “But it required a rolling exam schedule with myself and proctors in the room from 9 a.m. to 2 p.m.”

Other professors were willing to work around students’ schedules in their own way.

Richard Mangrum, assistant flight training professor, understood the students had obligations with work or family and did his best to reschedule his exams.

Mangrum allowed his students to take one-on-one exams in his office. His students were also able to take their exams on Vista, and a few students waited for the rescheduled time.

Sociology professor Timothy J. Owens made his students’ final the average of their three best quizzes and added ten points.

A snow advisory was put in place for Monday, advising that if students didn’t have to be out driving, they shouldn’t be.

Jarvie said it is ultimately Gregg Floyd, vice president of Finance and Administration, that officially makes the decision to close the university, but he has several other staff members’ input helping him make that decision, including Jarvie.

Police and state troopers kept them up to date with weather reports.

Jarvie said he thinks they definitely made the right decision to close the university during finals week.

“The bottom line is, if someone got hurt, or even worse, killed, is it worth forcing people to come in for finals?” Jarvie said.

Jarvie said they understand and apologize for the inconvenience this may have caused. “But we cannot take into consideration and worry about a student missing a flight to vacation, versus possibly someone getting hurt coming to campus,” he said.

Officials try and make the decision early to notify as many people as they can.