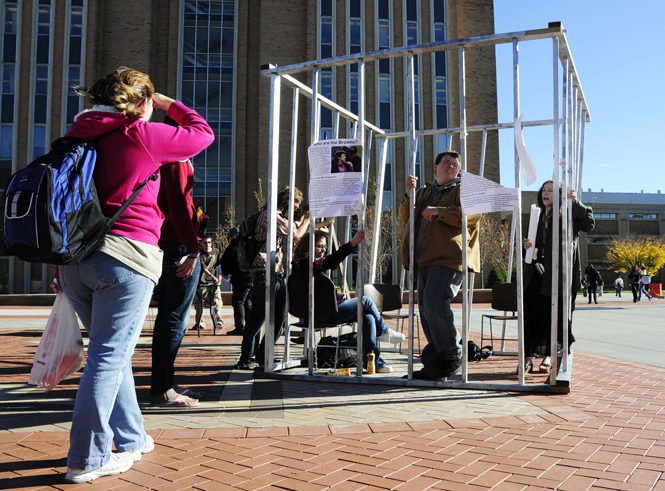 The Kent Student Liberty Alliance group is a finalist for an award from Students For Liberty for hosting the event of the year.

Last October, Kent Student Liberty Alliance constructed a political prisoner demonstration outside of the Student Center. The group received its nomination for the SFL award in early January. SFL is a nonprofit organization that supports student groups “dedicated to liberty,” according to its website.

“It was our first big event that we’ve ever done, so to be considered a finalist among all these other great universities and all of these great organizations was definitely a very good thing,” said Corey Moore, vice president of Kent Student Liberty Alliance. “It was an honor.”

The group will attend the International Students for Liberty Conference Feb. 18 through the 20 in Washington D.C. There they will learn how to become more effective activists. During the conference, an annual awards ceremony will take place, in which the group will find out if they won.

The winner will be determined by online voting, which is taking place until mid-February at http://www.surveymonkey.com/2011sflawards. Anyone can vote once a day.

Maggie Dickerson, president of Kent Student Liberty Alliance, came up with the idea to use political prisoners as the topic for the demonstration.

In late 2009, Dickerson saw Young American for Liberty groups building walls as demonstrations for the 20th anniversary of the Berlin Wall demolition.

Dickerson said she thought to herself, “Oh, that would be sweet if we could do that with political prisoners.”

Moore, a freshman electronic media major, supported Dickerson’s idea because he had a personal connection with it. Moore said he continues to write regularly to Edward and Elaine Brown, two of the five political prisoners they referenced in the demonstration. He followed their story during imprisonment and discussed it on the radio show, “News in a Nutshell.”

Everyone involved in the group helped to decide which prisoners to use in the demonstration. Prior to this school year, the group lacked student participation.

“There’s increase in people who legitimately want to do stuff for our organization,” Dickerson said.

Moore said he credits Stacy Litz, a Drexel University student, for helping them learn how to get more student involvement.

Moore said he thinks the demonstration received a lot of positive reactions from students, but not a lot came from it. He has talked with the Browns, and they said there has been no increase in mail since the demonstration.

“At least I think the students were able to learn from what it was,” Moore said. “Learn that, hey, we have a really high incarceration rate in the U.S., and a lot of these people haven’t done anything wrong and haven’t done any violent crimes toward anyone and are being held for political reasons.”

Moore has been active with the organization for about three years.

“I love liberty, and I love activism, and I just love being able to just get out there and make my voice heard and educate people,” Moore said. “That’s my biggest motivation.”