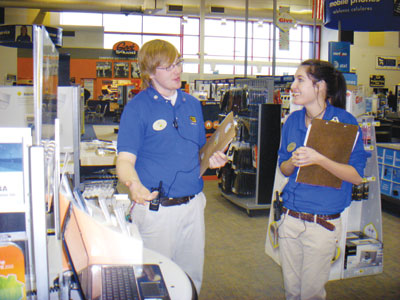 Money is a key to survival for any college student. Each year, Kent State students in every class from every major take on jobs in addition to their full course loads in order to fulfill financial needs. Those needs range from extra spending money to full-time tuition.

Four different students share their stories about the jobs they do in order to earn money.

Joe Miller is a freshman exploratory major who manages to carry a full course load while working full time at Best Buy.

“I work at Best Buy in the computer department. Basically, every day, I help customers (and) sell computers — things like that. I work full time there, so it’s anywhere from 32 hours a week to 40 hours a week. Right now, Christmas is coming up so it’s getting to be 40 and up, and I’ll work 50 hours a week during break.

“Being there full time, being there so many hours, you also train the people that you work with. You teach better selling strategies, better selling techniques and how to offer things like services and warranties. It’s not just the customer saying, ‘I want this computer,’ and you go get it for them; you have to sell them other stuff. It’s like you’re on commission, but you’re not really on commission.

“A year ago, there was a supervisor for every single department in the store. They cut back, and there are two supervisors for the whole store now. The people who work full time are kind of like the old supervisors now. They make you step up and basically act like you’re a supervisor, except you don’t get paid for it.

“It is a lot of fun. I like being competitive, and a sales job is competitive. The store does contests to try to boost everyone’s numbers. Because we’re not on commission, some people do care about selling stuff and making sure the store’s making money, but then there are others who just don’t care.

“It’s frustrating. (The supervisors) make me act like I’m a supervisor. I wish I were a supervisor; that way, people would have to listen to what I say. A supervisor will tell me to tell someone to do something, and they don’t want listen because I’m not technically the person who should be telling them what to do. It’s not a big part of the job, but it is something I have to deal with every day. People are cooperative for the most part, but there are sometimes those people who don’t cooperate.

“Just like sometimes there are great customers and sometimes there are the not-so-great customers. There’s the customer who won’t listen to a thing you have to say because they think that you are on commission. They think you’re just trying to sell them stuff. But, I mean, it’s your job to tell them about all this different stuff. Some people will even get mad to the point where they swear at you and tell you to just stop talking. Those are the customers that prevent you from doing your job.

“But there are nice customers. There was a guy in the store that I sold a computer to a year ago, and he said that I helped him and told the employee that I was training at the time, ‘You’re with the right person. I’m a big fan of Joe. I love my computer.’ Apparently I had searched for some kind of rebate for a long time that saved him a lot of money. That was a nice customer. It’s a good day at work when the customers compliment you and tell you that you’re helpful.

“Working young has been a great experience. I’ve been there since I was 16, and it’s taught me how to speak to people. I don’t know the people that come into Best Buy each day, but I can talk to them and have a conversation with them.

“With working full time, my schoolwork does suffer. I need to be at work, but I don’t necessarily need to be in the classroom. The classes I’m taking, I’m realizing I’m not interested in, so it’s really hard to get myself to go to them. So school definitely suffers, but I’m hoping next semester my classes will be more interesting to me, and I can go to all of them. I’m still trying to figure out what I want to do. It’s only my first semester, so I’m not too worried about it. I do plan to stay in school, I just have to figure out what I like.”

Joshua Lynch is a 26-year-old senior recreation parks and tourism management major who is a driver for PARTA.

“Through campus bus, you get to make your own schedule. Some days I’m working late at night, other days I’m waking up at 4 in the morning to be here for 5:45. I live out in Cuyahoga Falls, so it’s a bit of a drive. As you work your way up to seniority, you get to pick hours that better fit your schedule.

“The raises come quick; that’s one of the benefits of the job. It pays off, and it’s a fun job. I love it. I mean, a lot of people would be driven crazy by driving around in circles, but for a couple hours at a time it’s really relaxing. I used to (drive) full time when I worked for the county side of PARTA. I was working full time for about eight hours a day. But I don’t want to do this for the rest of my life, which is why I’m going to Kent State.

“I think I perform a valuable service for the students and the university. I haven’t had any bad experiences with people this semester. There are some people that aren’t your favorite (passengers), but most of the students here are very polite and accommodating of the bus service and are thankful for what we do.

“It’s the students that aren’t very thankful for the bus services that are hard to deal with. You get people who want to come in the back door when people are getting off. That’s probably the biggest complaint that I think all drivers have.

“There are so many people who sneak in from the back and some of the doors are automatic. So if you exit, after a couple seconds, the doors will close and the people running in from the back will get shut in the door and ask, ‘Why’d you shut the door on me?’ They get really put out by it. That’s probably my biggest complaint.

“As long as I’m here at Kent State, I’ll probably work for campus bus because I think it’s the best on-campus job. There’s plenty of hours to pick up if you want to or scale back if you need to; they’re very understanding.

Sarah Swoboda is a freshman integrated health studies major who just began working at Aeropostale in Youngstown after working at Chick-fil-A for three years.

“I just got hired at Aeropostale. I’ve only worked there a couple days so far, but I’m a sales associate, so I fold clothes and help people if they need any sizes or help in the dressing room. If there’s no one in the store, you’re putting clothes in order. But if people are in the store, you have to stop what you’re doing and ask people, ‘Can I help you find a size?’ I haven’t done register yet, but it’s a really easy job so far.

“I have to be on call sometimes, which is really annoying because you may not find out you’re working until an hour before. But I’m trying to work just a few days a week and on weekends, so it’s not too much. I like it so far.

“Some people, when you ask them if you can find them a size, they’ll just look at you and say, ‘No’ — basically, ‘Don’t talk to me.’ They give you that kind of attitude and you have to just brush it off and say, ‘If you need anything, let me know.’

“I’ve also worked at Chick-fil-A for the past three years, so you kind of just have to learn to get over (customer attitude). I’ve had some really rude customers that were really mean.

“I’ve done pretty much everything at Chick-fil-A like taking orders, being on drive-through, being on the headset, bagging orders, cooking and cleaning — I mean, anything and everything. It’s not a bad job; they give you hours off when you request them, you don’t work Sundays, and you get a free meal every time you work. But you’re working with a lot of customers, a lot of people, all the time, some of them can be really rude, and it’s not fun to come home smelling like chicken and being greasy and gross.

“I like the people I work with, but if I stay at Aeropostale, I want to quit Chick-fil-A. Aeropostale just seems like it’s a really chill place. Yeah, you interact with people, but you go to work in nice clothes, you come home in nice clothes.

“I’m what you call a curb-server, which means I run out to cars, take orders, take food out the door, collect money from customers — stuff like that. (Work hours) depend on school schedules; I work Sundays and Tuesdays. I really only work about 15 hours every week. Over the summer, because I didn’t have to deal with school or clinicals (for athletic training), I was working 35 to 40 hours a week. It just all depends on availability.

“I like it. I’ve been there for about eight months, and it’s just a fun job to have, especially if you know what you’re doing. When you first start out, it’s difficult; there’s that learning curve. You’ve got to learn all this fancy lingo, and it’s stuff that you never thought you would have to learn. Once you get the hang of that and get all the basics down, it gets fun because you get to interact with customers and you get to interact with the people you work with and the people who are making the food. There’s something new every day; that’s what I like about it. No two cars are the exact same, so each person is a unique challenge or experience.

“Every now and then, you’ll get that customer who, no matter what you do to please them, they’re always going to be unsatisfied. It hasn’t happened recently, but it’s just when that customer comes in to get food, and they’re already angry for whatever reason. Nothing you do is going to help that, so it just keeps snowballing. Then, if one thing goes wrong, it gets worse. I’ve never pissed off a customer or made someone really angry, but I’ve screwed up before. You do make mistakes.

“We’re open year-round, and regardless of what kind of weather it is, you have to be out there. Over the summer, we had some pretty rough thunderstorms with torrential downpours, and when that happened, you just have to do the best you can. Whether it’s a blizzard or freezing temperatures, you have to be out there. So that means you wear hats, gloves, plenty of layers; it’s definitely key. Personal safety is pretty important, but they want you outside no matter what. I know they mean the best for us, so I’ll live with it.”