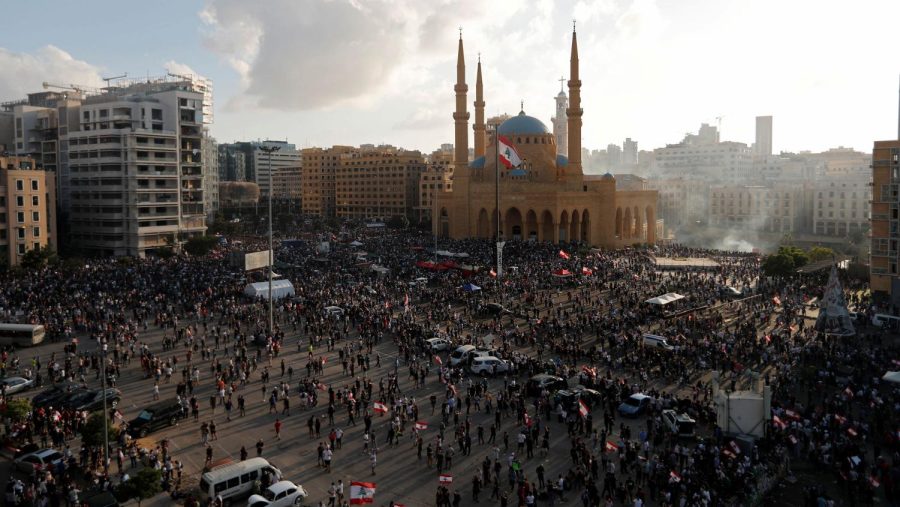 Demonstrators gather at a protest in Beirut on Saturday.

(CNN) — Lebanon’s government is expected to step down on Monday, two government sources told CNN, less than a week after a massive explosion in Beirut killed more than 160 people and sparked days of violent protests.

A senior ministerial source told CNN he believed the government would be reduced to caretaker status by Monday night. Three cabinet ministers have already quit, along with seven members of parliament.

Lebanon was already suffering through its worst economic crisis in decades, coupled with rising coronavirus rates, and the government was plagued by accusations of corruption and gross mismanagement.

Tuesday’s blast, which damaged or destroyed much of the Lebanese capital and was linked to a long-neglected stash of potentially explosive chemicals, was the last straw for many Beirut residents.

Prime Minister Hassan Diab, a self-styled reformer, was ushered into power last December, two months after a popular uprising brought down the previous government. Diab’s government is composed of technocrats and supported by major political parties, including the Iran-backed political and militant group Hezbollah.

Now the country will be tasked with finding a third prime minister in less than a year to contend with the spiraling crises Lebanon faces on a number of fronts.

Lebanon’s currency has lost 70% of its value since anti-government protests began in October. Poverty has soared, with the World Bank projecting that more than half of the country’s population would become poor in 2020.

The government had also been seen as powerless in the face of a growing banking crisis. The state has not passed a capital controls law, exacerbating the country’s severe liquidity crunch. The majority of people in the country have been subject to stringent and arbitrary cash withdrawal limits for nearly a year. Meanwhile, billions of US dollars are widely believed to have been withdrawn from Lebanon by the country’s economic elite, further depleting foreign currency reserves.

Lebanon’s financial woes were exacerbated earlier this year by government-imposed lockdowns, which were designed to stop the spread of the coronavirus pandemic but also brought the country’s ailing economy to a screeching halt.

Diab’s ministers had repeatedly accused the ruling class of disrupting their plans for reform. Politicians aligned with the country’s banking elite torpedoed the government’s IMF-endorsed economic program, which had been expected to dig into bank profits.

The protests over the weekend were some of the largest and most violent the city has seen in nearly year. The city convulsed with anger as protesters occupied several government ministries and threw stones and shards of glass at security forces. Police fired hundreds of rounds of tear gas as well rubber bullets and, in some cases, live fire.