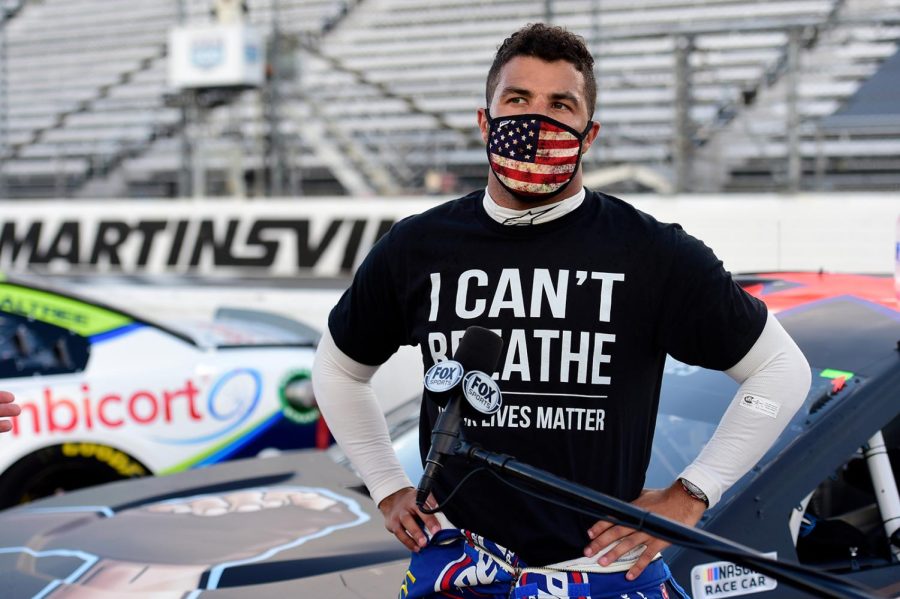 Bubba Wallace, driver of the #43 Richard Petty Motorsports Chevrolet, speaks to the media prior to the NASCAR Cup Series Blue-Emu Maximum Pain Relief 500 at Martinsville Speedway on June 10, 2020 in Martinsville, Virginia.

(CNN) — Department of Justice investigators said Monday they are looking into the noose that was found in NASCAR star Bubba Wallace’s garage stall.

“The U.S. Attorney’s office for the Northern District of Alabama, FBI and the Department of Justice Civil Rights Division are reviewing the situation surrounding the noose that was found in Bubba Wallace’s garage to determine whether there are violations of federal law,” US Attorney Jay E. Town said in statement.

“Regardless of whether federal charges can be brought, this type of action has no place in our society.”

The announcement came a day after NASCAR said a noose was found in Wallace’s garage stall and launched its own investigation into the matter.

“We are angry and outraged, and cannot state strongly enough how seriously we take this heinous act,” NASCAR’s statement read. “We have launched an immediate investigation, and will do everything we can to identify the person(s) responsible and eliminate them from the sport.”

The racing organization also said the incident “only strengthens our resolve to make the sport open and welcoming to all.”

Wallace, the only Black driver in NASCAR’s top circuit, has been an outspoken advocate of the Black Lives Matter movement and the corresponding protests against systemic racism and police brutality. He wore an “I Can’t Breathe” shirt before one event, repainted his car with the “Black Lives Matter” phrase and called on NASCAR to ban the Confederate flag, which the organization agreed to do June 10.

A source with Richard Petty Motorsports told CNN that Wallace never saw the noose. A member of his team discovered it and immediately brought it to NASCAR’s attention, the source said.

Wallace is set to race at Talladega at 3:10 p.m. Monday after rain postponed Sunday’s race. One driver told CNN that NASCAR drivers are planning a show of support for Wallace before the race.

Another driver, Corey LaJoie, replied to a tweet from a journalist about the plans: “pretty much the entire garage. Stay Tuned.”

‘This will not break me’

Wallace tweeted Sunday that the “despicable act” left him “incredibly saddened and serves as a painful reminder of how much further we have to go as a society and how persistent we must be in the fight against racism.”

“This will not break me, I will not give in nor will I back down. I will continue to proudly stand for what I believe in,” Wallace said.

NASCAR told CNN the garage area where the noose was found is restricted to essential personnel, which includes race teams, NASCAR officials, security and health and safety personnel.

Sunday also saw the first time NASCAR fans returned to the track in Talladega, Alabama, where a Confederate flag with a “Defund NASCAR” banner was seen flying over the track. Confederate memorabilia was also being sold across the street.

“I’m enraged by the act of someone placing a noose in the garage stall of my race team. There is absolutely no place in our sport or our society for racism,” he said. “This filthy act serves as a reminder of how far we still have to go to eradicate racial prejudice and it galvanizes my resolve to use the resources of Richard Petty Motorsports to create change.

“The sick person who perpetrated this act must be found, exposed, and swiftly and immediately expelled from NASCAR. I believe in my heart this despicable act is not representative of the competitors I see each day in the NASCAR garage area. I stand shoulder to shoulder with Bubba, yesterday, today, tomorrow and every day forward.”