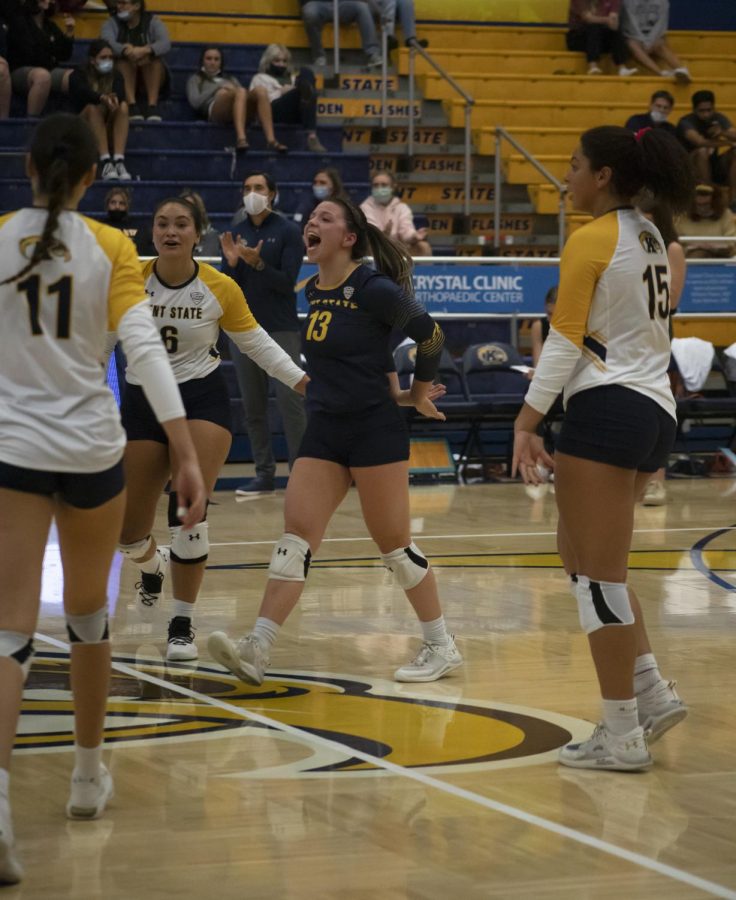 Senior defensive specialist Erin Gardner (13) celebrates getting a point with her teammates during the volleyball game on Oct. 8, 2021. The Flashes lost to Central Michigan University 3-1.

“We’re going to sit back and enjoy this for a little while,” coach Don Gromala said after the Kent State volleyball team’s long-awaited win Saturday.

The Flashes ended a four-game losing streak when they defeated Eastern Michigan 3-1. The team had narrowly lost to Central Michigan Friday.

“We’ve been having time for people to get comfortable with people who haven’t been on the court with each other for too long,” Gromala said.

Senior libero Erin Gardner played her third game after recovering from a knee injury suffered in the middle of last spring’s season.

“Friday was tough,” Gromala said. “We lost some giveaway sets. We need to get comfortable with each other in different scenarios and find ways to be better with our setter-front row offense to have some more options to make it harder for us to get out of trouble.”

But senior opposite hitter Melissa Kolurbasi said the team was still confident during Friday’s loss.

“Even though we lost Friday, we made less errors than last weekend,” Kolurbasi said. “It looked like we were fighting. We didn’t just give up.”

Eastern Michigan won the second set, but the Flashes pulled away in the third set to win 25-17. KSU won the fourth set 25-21.

Gromala said serving was key to Saturday’s win. The Flashes had nine aces.

“We served really well Saturday by hitting our spots and mixing things up to catch them off guard,” Gromala said. “This weekend was the first time we served short that often, which we’ve been working on for a couple weeks. It was cool to see the girls bring that into a game situation.”

Kolurbasi led in kills in both games with 16 Friday and 18 Saturday. She hit a season-best .368 against Central Michigan and .295 against Eastern Michigan.

“We have a better connection with the setters now, and we’re trying to run different tempos like inside sets and outside sets,” Kolurbasi said. “Since we’ve been doing this, we have more opportunities for us to score.”

Gromala credited Saturday’s win to the pin hitters’ performance. Freshman Kiersten Kraus made her second start of her career, joining Kolurbasi and Matthews as outside hitters.

“They were good, they were good and then they were really good,” Gromala said. “From Friday, we knew that one pin wasn’t enough to beat a good team like Central Michigan. Saturday we had three pins that did really well. They did a good job of finding different ways to create opportunities to score points.”

Kolurbasi said that the team’s win also came from “mixing things up” with their hitters.

“Before this weekend, I felt that we were predictable,” Kolurbasi said. “But this weekend, we mixed it up with Savannah hitting a different tempo set while I was running inside sets.”

“It’s obviously a big match when playing your rival,” Gromala said. “Hopefully we keep getting better and better to give us more options to win down the road.”