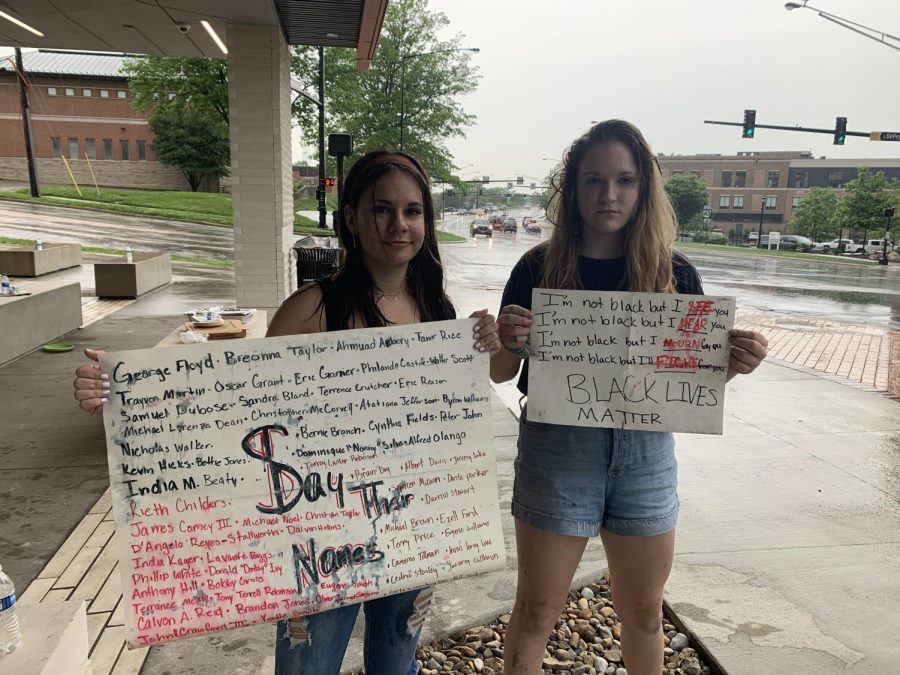 Two groups of young protesters advocated for police reform and the recognition of racial discrimination against minority groups yesterday following the death of George Floyd.

In Kent, the protests started at noon at the corner of Haymaker Parkway and South Depeyster Street near the Kent Police Station. Protesters held signs with statements advocating for Black Lives Matter and naming African-Americans killed by police brutality, displaying them for cars passing by the police station. They were met with supportive car honks, cheers of drivers and clenched fists held outside car windows. While a spot of heavy rain caused some people to leave, some persistent protesters continued to raise their water-logged posters for drivers to notice their presence.

Protester Chloe Nieszkutsch said the group increased and decreased in number throughout the afternoon, peaking at around 30 people. The protests Thursday were comprised of high school and college-age students, many of whom came alongside friends to protest together. Cases of water bottles, snacks and pizza lined the building entrance and seating area for protesters to enjoy as a break between holding signs.

There were at least two protesters who advocated for police officers yesterday by the Kent Fire Station, said TJ Ingersoll, the owner of Fresco Mexican Grill restaurant in Kent. Ingersoll said the two youth males wanted to advocate for innocent officers who perform their jobs without racial bias. The two were holding an American Flag and Blue Lives Matter Flag, and were seen walking by the police station towards East Main Street by the fraternity houses.

Lewis said the Tuesday protest was the largest with around 100 to 150 people. He said he approached the protesters and told them they were welcome to protest and exercise their First Amendment rights, and appreciated their peaceful demonstration.

Kent Roosevelt High School sophomores Claire Lovinski and Helen Plicka were eating lunch in Kent yesterday when they saw protesters at the police station and decided to join them by making signs. Lovinski discussed why penalties should be imposed for officers who perform their duties improperly.

“There’s so many officers that are killing innocent people,” Lovinski said. “We really need to be addressing that and showing it’s not alright at all, even though people with years of training can act on impulse but civilians can’t.”

Fresco provided free tacos and gift cards throughout the week for both protesters and anti-protesters at the police station.

“I want people to know they [the protesters in Kent] are peacefully protesting,” Ingersoll said. “Protests are not meant to be comfortable for everybody; that’s why it’s a protest, because there’s uncomfortable issues happening, and people’s voices need to be heard in order to make change.”

Another protest started at 5 p.m. at Stow City Hall at the corner of Graham and Darrow roads. It drew around 13 people, all of whom advocated for the same changes and acknowledgements as the Kent protesters. They also faced their posters towards traffic passing through the intersection, with drivers honking their support and taking pictures of the group. Their posters included the phrases “white silence is violence,” “all lives matter when black lives matter” and “we are the change.” Members of the group shouted and repeated chants such as “no justice, no peace” and “Black Lives Matter.” Some of the protesters were part of the group at the Kent police station earlier in the afternoon.

University of Akron student Anna Buchwalter and her friend Jaconna Hall said they found the Stow protest through social media apps like Facebook and Snapchat Maps, which enable people to find groups of people who are protesting in local public spaces. Buchwalter said she wanted to support the Black Lives Matter movement and persuade those to come out and physically protest instead of only voicing their concerns on social media.

Buchwalter discussed how these protests will continue to occur across the country and hopefully educate younger generations on issues such as police brutality and racism.

“This is just the beginning,” Buchwalter said. “With everything going on, I definitely believe that this isn’t just going to stop with George Floyd. I feel like George Floyd was the breaking point for a lot of people. Me and my friends are tired of sitting around and being angry about it. We want to do anything we can.”

“I’m sick of seeing this stuff on the news,” Clingman said. “I want to raise awareness about racism and use the time that I have to enlighten people about this.”

Kent State’s The Reach Out will hold a candlelight vigil Friday at 7:30 p.m. on campus at the K by the university library to honor the life of Breonna Taylor on what would have been her 27th birthday. The 26-year-old woman was killed by police officers when they conducted a no-knock search warrant at her apartment in Louisville, Kentucky on May 30.

Black United Students (BUS) will hold a justice march in remembrance of George Floyd Saturday at 2 p.m., starting at the Rock on East Main Street and ending at the Southern Comfort Kitchen Food Truck. According to Lewis, Kent’s police department does not anticipate any National Guardsmen coming to the city to assist with future protests. The Ohio National Guard has been deployed to Cleveland, Columbus and Washington, D.C. to assist with protests.

Troy Pierson is a reporter. Contact him at [email protected]