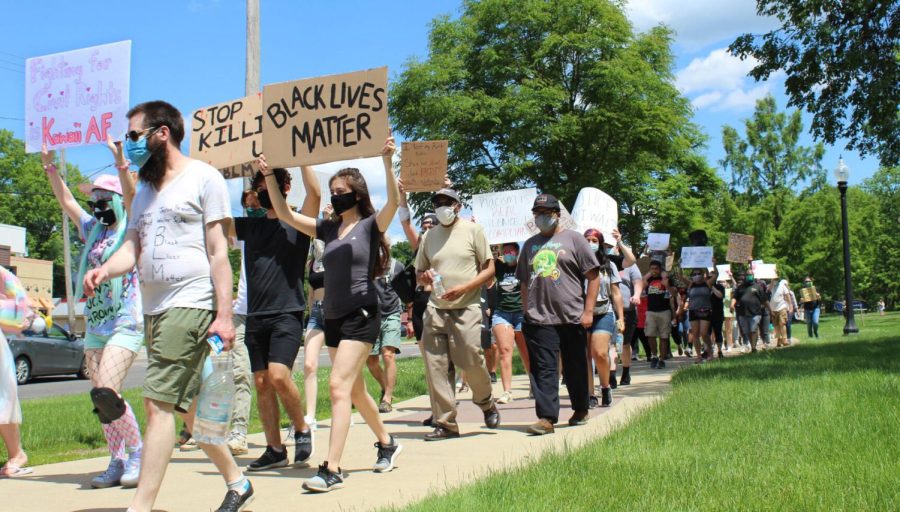 Protesters make their way towards the Kent Police Department. The march started at 2:30 p.m.

Hundreds of protesters who marched the streets of Kent yesterday afternoon sent a strong message to any observer who witnessed their demonstration: people are tired, angry and determined to see changes to law enforcement in their community. Even with masks on their faces, the citizens who chanted “Black Lives Matter” made their priorities clear as they made their journey from campus to downtown Kent and University Plaza.

The protest began at the rock on front campus at 2 p.m. The event gathered roughly 500 participants, including a mix of black and white citizens from the local community. The majority of the protest was comprised of youth, and many protesters held signs with phrases such as “Black Lives Matter,” “We will not be silent,” “I can’t breathe” and “Stop debating racism.”

Leaders from BUS and Undergraduate Student Government (USG) were present to inform protesters of the day’s events by giving speeches at the front campus pavilion and handing out itineraries. The march started at around 2:30 p.m. with a walk to the Kent Police Station on the corner of Haymaker Parkway and S. Depeyster Street, where a series of protesters have congregated throughout the week. Protesters walked along the sidewalk chanting “No justice, no peace” and “Black Lives Matter” and received affirmations of support from passing drivers who clenched their fists out their car windows and honked their horns.

USG President Tiera Moore said the march was a perfect opportunity to reach out to the student body and local community to educate people on adversities the black community faces. She said education on these issues is the most important element for students to understand so they can help speak up and end systemic racism, both on campus and in the community.

“Other university student governments around the state are working hard with their black student unions, and I love that collaboration,” Moore said. “It’s important we take a step in the right direction of building the relationships between students that we typically didn’t have before. We really need to serve all students, especially students who need us the most.”

BUS President Tayjua Hines said black students from Kent State have been subjected to a number of uncomfortable situations and false accusations from both Kent State police and city police, which has developed a sense of fear and stigma towards law enforcement. Hines said she wants the university to support these protests and acknowledge systemic racism on campus.

The university plans to hold a virtual town hall via Zoom on Tuesday, June 9 at 5 p.m. for faculty and staff to voice their concerns and ideas to make the community more inclusive. Another town hall organized by BUS and USG will be scheduled for students at a later date.

Once the march reached the police station, protesters continued chanting before stopping to hear a speech from Hines, who talked about the injustices of police brutality happening across the country. Protesters then sat in silence for eight minutes and 46 seconds to commemorate the life of George Floyd, the amount of time Floyd was unable to breath as officer Derek Chauvin knelt on his neck during his arrest. At least three officers from the Kent station were present, and the protesters remained peaceful for the duration of their demonstration.

The protest mobilized again on a march down S. Water Street toward University Plaza. Onlookers from businesses, houses and University Inn watched as a long stream of marchers walked along the sidewalk. Clustered groups of protesters chanted intermittently as they progressed under the intense, humid 80-degree weather. Younger workers from businesses like McDonald’s clapped and cheered out the drive-thru window as the march passed by.

When they reached University Plaza, the Southern Comfort Kitchen — a black-owned food truck founded by Kent State alum Will Matthews — was parked outside the Kent ReStore, selling New Orleans-style cuisine. Matthews said BUS organizers approached him to collaborate on the march, and this was the first protest his business has been involved in.

Supporters stationed by the truck gave out free water bottles to protesters as they filed into the parking lot to collectively chant “Black Lives Matter” one last time. The protest ended at around 3:30 p.m.

Iris Meltzer, a member of the Kent League of Women Voters, was present at the march to hand out voter registration forms. She said she saw this march as a good opportunity to reach out to unregistered voters, as the regular events she and her organization attends to pass out forms were all canceled due to the COVID-19 pandemic. A medic was also present to provide any medical assistance to protesters. The vast majority of the crowd wore masks to promote public health, which leaders from BUS also encouraged for the event.

On Sunday, the event Chalk-Walk Kent was held from 10 a.m. to 4 p.m. to decorate downtown with art supporting the Black Lives Matter (BLM) protest and the black community. Another BLM protest will be held in Stow on Wednesday, June 10 at 2 p.m. at City Hall at the corner of Darrow Road and Graham Road.

Troy Pierson is a reporter. Contact him at [email protected]