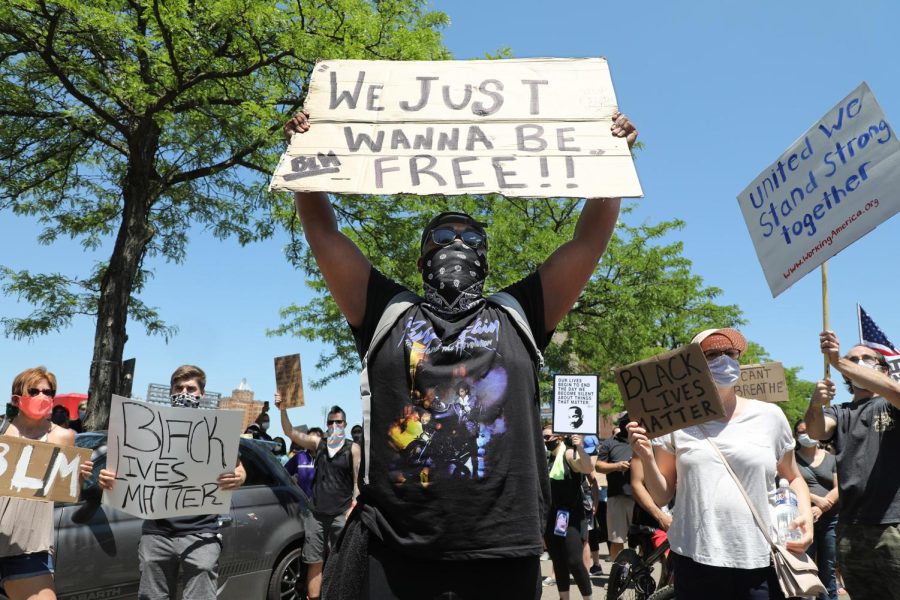 Chad Payne of Akron holds up a sign as he stands in the middle of S. High St. in downtown Akron during a protest march to end police brutality on June 6, 2020.

Editor’s note: Hundreds marched in Akron this weekend to protest police brutality and combat racism following the May 25 death of George Floyd in Minneapolis. KentWired’s reporting team covered the protests, providing live updates as events unfolded. Visit KentWired.com for a full report from the weekend, including protests in Kent and several photo galleries from the marches.

Two groups of protesters – one organized by Shawn Mansfield, the other by Tajha Dixon – gathered in downtown Akron on Saturday afternoon before joining together to march in protest of police violence against the black community.

Organizers provided materials to make signs and resources for attendees to sign up to vote.

Dixon saw Saturday’s event in a Facebook post and noticed it was getting a lot of backlash because it was being organized by a young, white teenager. So Dixon, who is an event planner, decided to help out by marketing and reaching out to people to build up the event.

“I think now we’re to a point where social media is so fluid and so fast to get a message out that people can finally see that it’s not just them that are fed up, it’s their entire community,” Dixon said. “The turnout that we’ve gotten today is amazing and just shows that your neighbors do care about you. We care about the same things. We want the same things. Now is the time when everyone is just fed up and ready to do something about it.”

Before the march began, Davonta’e Winchester and Prophecy Dorsey, in addition to Mansfield, gave speeches, asked protesters to raise their fists in solidarity and said a prayer.

“Instead of having a moment of silence, we’re going to have a moment of prayer,” Dorsey said. “Father in Heaven, I know you are looking down, and I know a part of humanity has broken into pieces. I ask God that you look down upon us and see that we are making an effort to get right … we are trying with every fiber in our being to see ourselves as created in your image and not made in the image of man. Call us to see the need and the necessity for one race — the human race.”

Leaders of the protest made it clear that anyone who had intentions to loot or vandalize would be separated from the group, as it was to be a peaceful protest.

Before the group marched to the Harold K. Stubbs Justice Center, Winchester and Mansfield exchanged words with Akron mayor Daniel Horrigan, who was in attendance.

Among the attendees were three anti-protesters who declined to give their names but said they’ve been showing up for the protests in Kent, too. One of them, who identified himself as CJ, wore a ball cap with Ronald Reagan’s face on it and carried a poster that read “All Lives Matter” along with a black-and-white U.S. flag with a blue stripe.

He said he came out to protest “against the fact that they’re saying [only] one demographic matters.”

When the protesters arrived in front of the justice center, they chanted, “Take a knee” to police who were standing outside the building. The officers did not take a knee. The protesters then began to chant, “Quit your job.”

The crowd applauded when several officers knelt, after being given permission by Chief Kenneth Ball. After, police watched as protesters marched away from the justice center.

According to the Akron Beacon Journal, the police had to call in the bomb squad and place officers on “heightened” alert after a detonator was found in the area of High and Exchange streets.

Lieutenant Michael Miller at the Akron Police department said there are no other details or specifics at this time.

“Our goal was, as always, to ensure the safety of citizens and to protect property during the protest,” Miller said.

Among the protesters was John Rasinski, who came to the protest with his saxophone to play some music. Rasinski said Saturday was the first day he had come out for the protests because he has been heartbroken over what is going on.

“I’ve been playing ‘Amazing Grace’ because I think we could all use some grace,” Rasinski said. “To tell you the truth, I’m really hurting about what’s going on in this country.”

Protesters returned to the corner of South High and East Exchange streets to listen to Winchester speak to the crowd before marching the route a second time. The protesters then gathered at the Matthews Hotel monument site at the corner of Perkins and North Howard streets before marching to the west side, stopping at John R. Buchtel Community Learning Center on Copley Road, then back to downtown Akron.

On Sunday, the group Motivators Over Imitators gathered at the Akron-Summit County Public Library downtown for a peaceful protest beginning at noon. Winchester and Mansfield were present again, and Winchester led the crowd in a prayer before starting to march.

As protesters headed toward the University of Akron chanting, “No justice. No peace,” they stopped along their way at the Akron Police Department, where Winchester called for a cut to the department’s budget as people watched from the windows of the Harold K. Stubbs Justice Center building.

“What we do as a people, we hold the governor [and] the mayor responsible,” Mansfield said. “They have done nothing for the people.”

The protesters gathered and closed down the intersection of Exchange, Union and Brown St. The crowd took a knee and held 60 seconds of silence for all those killed by police or law enforcement, as they demanded those driving cars to either join them or turn around.

As the protesters kneeled, Mansfield led them in a chant of “love” and “peace,” before continuing to march onto Spicer Street chanting “Don’t start no shit, won’t be no shit.”

The march continued down Spicer Street with Mansfield leading the crowd in a chant, “A family that prays together, stays together.”

As the crowd marched along Johnston Street chanting “I can’t breathe,” a truck joined the protesters and Winchester and Mansfield climbed in the bed to continue leading the march.

Then at 2:22 p.m., Daquane Stephens, one of the protesters, was hit by a car on Johnston and South Arlington streets. Stephens said he saw someone driving quickly down the road where the protesters were marching. He stepped in front of the car because he expected the driver to slow down as it approached the group, but instead, the driver sped up.

Stephens was evaluated by paramedics and then returned to the march. He said he didn’t want the incident to overshadow the protest. There is no report of the incident, as Stephens declined to make a formal complaint.

The march continued, returning to the justice center as protesters chanted, “No more bad apples.” When the protesters returned, barriers were set up at the police department, blocking the steps and sidewalk in front of the building. Through a megaphone, one protester asked why the barriers were put in place.

The crowd soon arrived back at the library, where their march began, and Winchester led the protesters in a closing prayer.