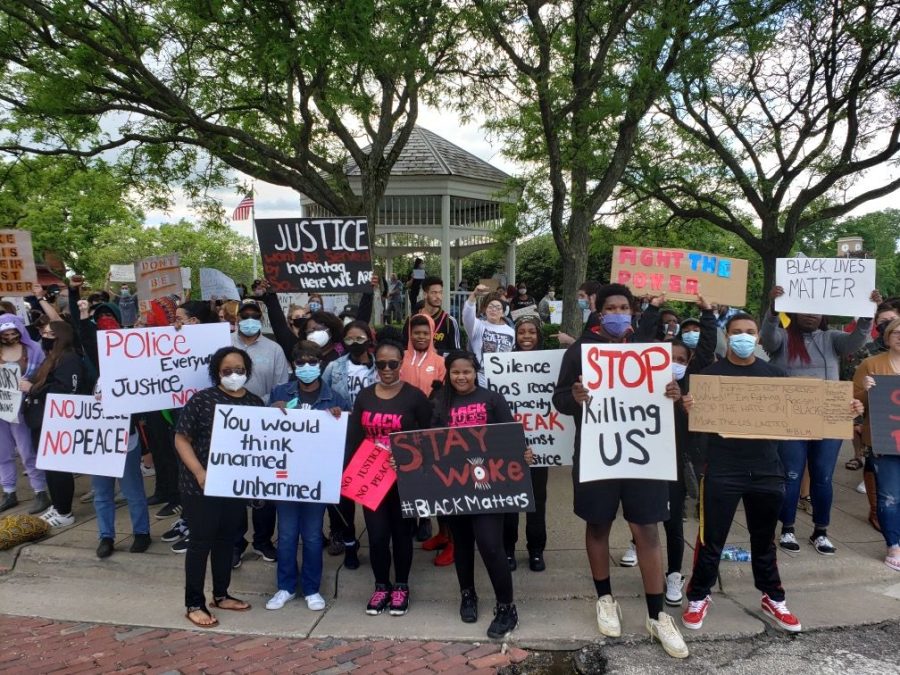 Community members gather at the gazebo on the corner of Franklin Ave. and W. Main St. in downtown Kent Sat. May 30 to support the Black Lives Matter movement, as well as protest the death of George Floyd. The protest was peaceful and there was not a large police presence.

Over 250 people gathered at the gazebo on the corner of Franklin Avenue and West Main Street in Kent on Saturday, May 30 to support the Black Lives Matter movement as well as protest the death of George Floyd.

While the Portage County NAACP didn’t organize the gathering, President Geraldine Hayes-Nelson and Publicity Chair Frank Hairston were in attendance and spoke to those at the event.

“We wanted it to be family-friendly and very inclusive,” Hayes-Nelson said. “It was to make note of the disparity in the communities and the need for reform of the justice system. More importantly, in support of looking at how we can begin to address the injustice.”

“The main thing I saw yesterday that really sparked something in me was the different races that came out to show support,” Jones said. “It wasn’t just a black thing, it wasn’t just a white thing. There were so many different races there and just for people to see that, blacks and whites mixed and other people of color, that’s really great for them to come out.”

Jones also said he was impressed with the size of the protest, as Kent isn’t a particularly large city compared to the other protests in Cleveland and Columbus, it meant a lot to him that so many people came out. Jones said he considers Kent a second home.

“It didn’t turn violent either, that was another important thing,” Jones said. “I know a lot of other protests can get crazy and [Kent] didn’t. We kept it peaceful, we kept it mature and that was really great.”

Hayes-Nelson said one of her main reasons for attending the protest was to support the youth, as many of the people in attendance were teenagers or young adults. She wanted to make sure the protest would be safe.

“I worked closely with the Kent Police Department, we talked about wanting it to be peaceful,” Hayes-Nelson said. “I also met with Lt. Green at State Highway Patrol, and we discussed that we did not want a heavy police presence because it’s going to be a peaceful march, and that’s why I was going to be there, to maintain peace.”

Jones said the speakers at the event, Hayes-Nelson and Hairston, were very thoughtful and communicated the right message as well as good representation.

“It was an African American woman and a white man, that image right there meant a lot,” Jones said.

There is another protest planned for Monday at 8 a.m. outside of the Portage County Courthouse in Ravenna.

Kaitlyn Finchler is a photo editor. Contact her at [email protected]