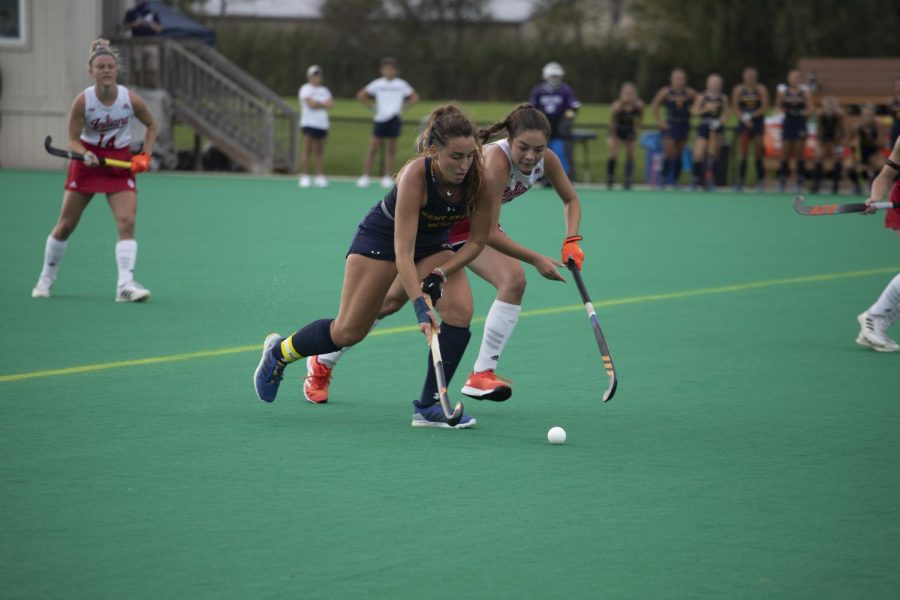 Senior midfielder Helena Cambra Soler (22) dribbles the ball down the field during the field hockey game on Oct. 10, 2021. Kent State won 2-1 in overtime against Indiana University.

When in doubt, don’t count them out.

Coach Kyle DeSandes-Moyer talked about her team’s ability to comeback in win games.

“I don’t exactly know what it is,” DeSandes-Moyer said. “I don’t think it is easier on us, I just think they have a lot of resilience.”

No. 24 Kent State got its first victory of the weekend against Mid-American Conference opponent Longwood on Friday.

About halfway through the third period, Longwood took back the lead.

With 1:44 left in the game, sophomore Katie Wuerstle scored KSU’s winning goal. Junior forward Sydney Washburn picked up an assist on the play.

The Hoosiers took the lead late in the first period, and held it all the way until the final minutes of play.

Maria Cambra tied the game for the Flashes with just 1:43 left in the fourth period. Helena Cambra and Knapp each earned an assist on the play.

Then four-and-a-half minutes into overtime, Rodriguez Seto won the game for KSU on a penalty corner. She was assisted by Knapp.

“Today was much more improved defensively,” she said. “We were way sharper in recovery and in our recovery lines, and way more urgent.”

This was Kent State’s fourth overtime victory of the season.

Kent State improved to 8-4 overall after the victory against Indiana. The Hoosiers fall to 7-7 on the year.

DeSandes-Moyer said she was satisfied with her team’s performance over the weekend.

“We played two strong, gritty teams this week,” she said. “We knew it wasn’t going to be easy, and I am proud of the effort.”

Kent State moves into sole possession of second place in the MAC after defeating Longwood. Miami is in first place with a 4-0 record in the MAC.

“There is definitely a lot more work that goes into a conference game,” she said. We know the opponents pretty well and are familiar with the players.”

The Flashes will look to take first place when Miami University travels to Kent on Friday.