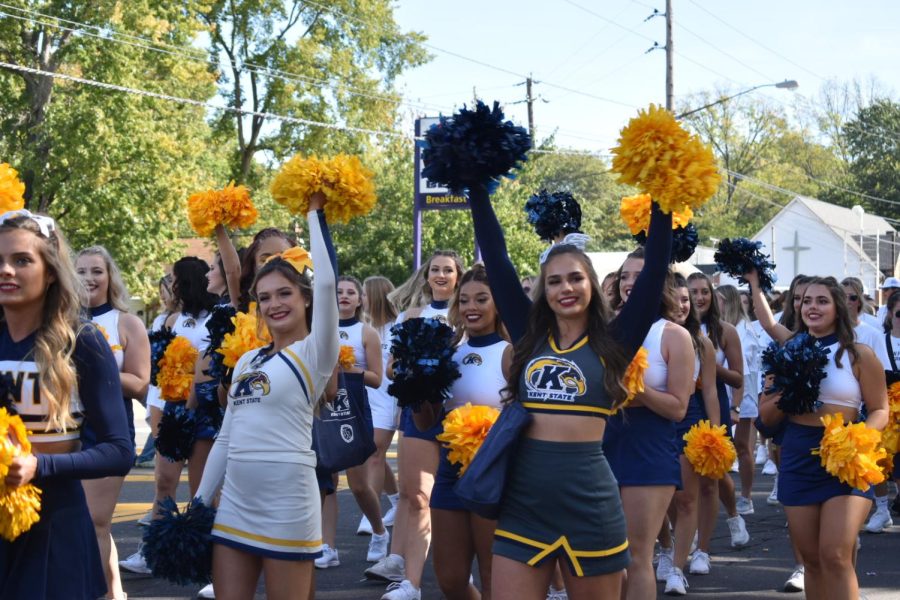 At 10:30 a.m. on the corner of Main Street and Midway Drive, ambulances and fire trucks heralded the parade’s kickoff.

Members of the class of 2020 acted as the 2021 parade grand marshals, an honor reserved for alumni and leaders.

The homecoming court rode in the back of a horse drawn wagon, waving at the crowd. The court included representatives from each of the Kent State system’s eight branch campuses.

Student and staff organizations and local businesses took the opportunity to join the community event. Campus groups included the Flash Activities Board, Paws for a Cause and academic organizations representing the University’s colleges and LGBTQ+ groups like Spectrum.

Kent Mayor Jerry Fiala waved to his constituents from the window of his car. Fiala was followed by candidates running for Judge of the Portage County Municipal Court, with their supporters walking behind and sporting brightly colored t-shirts in support of the campaigns.

Alumni gathered in bleachers by the Rock on Front Campus, returning for the in-person events they missed out on last year.

“Next year is our 50th. I don’t think we’ve missed,” says Don, Kent State alum of the class of 1972, of his yearly attendance at the homecoming festivities.

Don, a retired Kent State professor and eyewitness of the events of May 4,1970, returned for the day with his college roommate and their wives.

Many in attendance brought along their family and friends, like Lila Crescenzo, the young daughter of Kent alumni who spent the event catching candy and joyfully announced she was excited for the parade.

“Just a couple weeks ago,” Lila’s mother graduated. Crescenzo’s grandmother Pam shared with me that both her daughter and son in law were recent alumni who gathered the family at Kent for homecoming.

Homecoming featured many more alumni, students, staff and community members whose excitement was visible in Kent this weekend as they celebrated 103 years of the University’s homecoming events.

Sophie Young is a reporter. Contact her at [email protected]