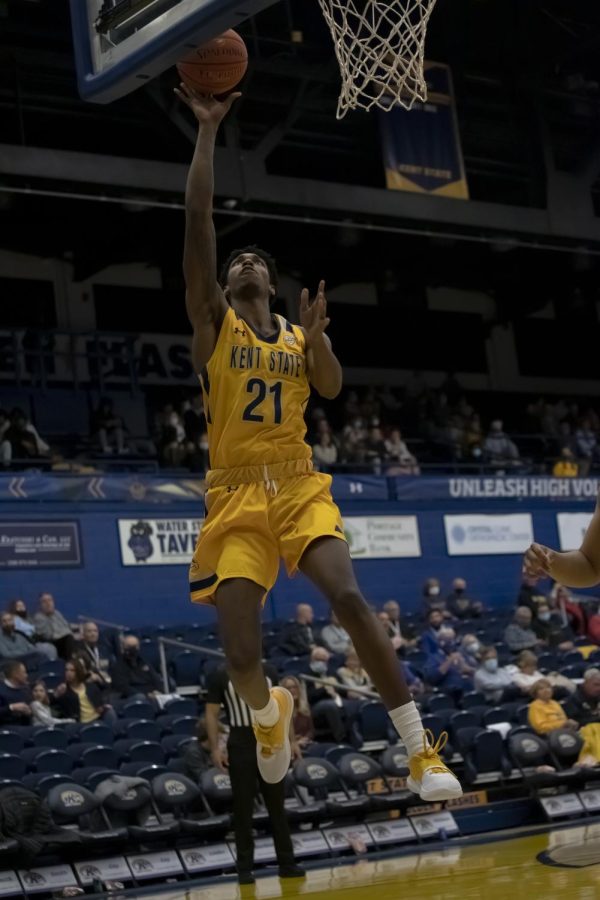 Kent State men’s basketball coach Rob Senderoff’s 200th win as a Flash was one of his most dominant.

“We’re very proud of coach,” redshirt sophomore guard Giovanni Santiago said. “That just demonstrates what kind of coach he is. We all understand that he’s a great coach, and we’re just proud to play for him. That was a great moment for us.”

Senderoff was greeted with an ice cold water bath as he walked into the locker room, his team’s congratulations for the accomplishment.

“I got ambushed,” he said. “Malique [Jacobs], which should not surprise me at all, got me. He was ready for that one. I’m happy for our whole team and program, so great for them to get me like that.”

Senderoff got his first win as head coach of the Flashes on Nov. 15, 2011 against West Virginia.

Among the players on the team in Senderoff’s first win was Randal Holt, he got to be on the team for his 200th win as an assistant coach.

“There’s a lot of people that helped me throughout my career here at Kent,” Senderoff said. “I’m just thankful of all of them. I also say to myself ‘I wish it happened two games ago’ because we’re 4-2, and you want to win every game you play. We have a lot more ahead of us this year. Maybe when I’m done coaching I’ll think back about it, but happy that we won tonight, more happy with how we played in the second half.”

The Flashes improve to 4-2 while the Pioneers fall to 2-3 on the season.

Point Park kept it close to start, with a slim 9-8 KSU lead five minutes into the game.

But Kent State would surge ahead on a 12-0 run, and the Pioneers would only score 13 points the rest of the half to go into halftime down 48-21.

KSU’s defense held Point Park to a first half field goal percentage of 26.3. The Flashes shot 46.8 from the field after a slow start to the half.

Kent State had a nice advantage in three pointers, going 7-of-15 in the first half while the Pioneers went 4-of-11.

As dominant as KSU was in the first half, it was nothing compared to the second where the Flashes shot 71.4 percent from the field while holding Point Park to a 22.9 percentage.

Kent State outscored the Pioneers 59-20 in the second half and increased its three-pointer output to 9-of-16.

The Flashes finished with a field goal percentage of around 60 percent, the first time they have shot 60 percent or better since Jan. 14, 2017 against Western Michigan.

Santiago, who had a team-leading 51 three pointers last season, went 6-of-6 from the three-point range. He struggled coming into the game, shooting 8-of-26 from deep this season. It was the second-most made threes in a single game without a miss in KSU history.

Santiago said it felt great to be able to make those baskets.

“I was a little disappointed in the way I started the season,” he said. “But I just keep getting my shots up and keep having confidence in each shot. I just have to stay ready and knock it down when I’m open.”

Senderoff said that team has some good shooters.

“Five of the six [three pointers that Santiago made] were assisted,” Senderoff said. “When you’re shooting rhythm threes that are off the pass, you’re going to shoot a good percentage. Those are the things that lead to your success on the court.”

Freshman guard Jalen Sullinger had the best game of his young career, scoring a team-high 24 points with five assists while grabbing four rebounds.

“We give out an award for who makes the most hustle plays throughout the night,” Senderoff said. “Jalen got that, so [he went] beyond just scoring the basketball. Today at shootaround, he had a completely different [shooting] approach than last week against Oberlin, and he was awful against them because of his approach.”

Senderoff added that the Flashes play games against opponents like Point Park so that people like Sullinger can get time in and become better players.

“He gets his butt kicked every day in practice,” Senderoff said. “He’s playing against Sincere [Carry], who’s one of the best guards in the country. Your first game is against Xavier, he’s playing against an All-American when he goes in the game. In the first game [of the Naples Invitational] he doesn’t play well, he plays two minutes and I yank him because we’re trying to win and I don’t have the time to let him play through some mistakes.”

“But he needs these games because he’s a really good player. And at one point we’re going to need him to play well consistently. He needs them to develop confidence and understand ‘How my approach impacts how I play.’”

Sullinger also had five steals, the most in one game by a Flash this season.

Sullinger said he credits his performance to his teammates.

“We were all clicking tonight,” Sullinger said. “And when we’re all clicking, it’s easy for one individual to click. Anybody can have the role of scoring, but that’s not going to get you on the court. Me and coach have been talking about things bigger than scoring like rebounding, being where I’m supposed to be on the defensive end and moving the ball better to get more assists. The scoring is going to come with great attitude and great effort, so I’m not worried about it.”

Redshirt senior forward Justyn Hamilton, who had yet to reach the double-digits in rebounds, had a season-high 12 boards.

Senderoff said Hamilton’s ability to rebound is important because of the physically small guards that the team has.

“Sincere is a monster,” Senderoff said. “And he’s a great rebounder. But he’s also small in height, Justyn is 6 feet 11 inches tall, we need him to rebound. To see him do that, he can build off of that, and we need him to get more defensive rebounds.”

Hamilton also had 14 points, earning the third double-double of his KSU career, now in its second season. He also had three blocks.

“I thought he had been better at [blocking] in the preseason,” Senderoff said. “Flowing to the basketball, timing on blocks, so to see him get three tonight was good.”

Carry also added a season-high nine assists, just one short of recording his first double-double as a Flash.

“That was a point of emphasis coming into the game,” Santiago said. “That’s one of the keys for us to win during the season. We do that, we’re going to have a good season.”

The Pioneers had 16 turnovers, which KSU scored 15 points off of.

Kent State had a season-high 25 assists.

Senderoff has stressed the importance of sharing the ball all season.

“You have a lot of guys who have the ability to create shots for others,” Senderoff said. “We need to have those type of games where the ball is really popping, and when we do that, we will score a lot of points.”

Freshman forward Akeem Odusipe, who up until this point was out with an illness, saw his first playing time of the season, playing nine minutes and scoring two points and two rebounds.

“Good to see him get out there,” Senderoff said. “There’s a lot of work he needs to do. He missed so much time, he missed six or seven weeks, so he is really far behind. But to give him an opportunity to play, you need to play a little bit to be able to get better.”

Junior guard Malique Jacobs, who is second on the team in points (64) and first in rebounds (38) was out with a minor back issue. Senderoff said he doesn’t expect the issue to be long term.

Kent State will next play Towson University (4-3) on Monday at 7 p.m.

“[Towson] is an elite team in terms of their physicality,” Senderoff said. “Going to be as physical as any team we’ll play all year.”