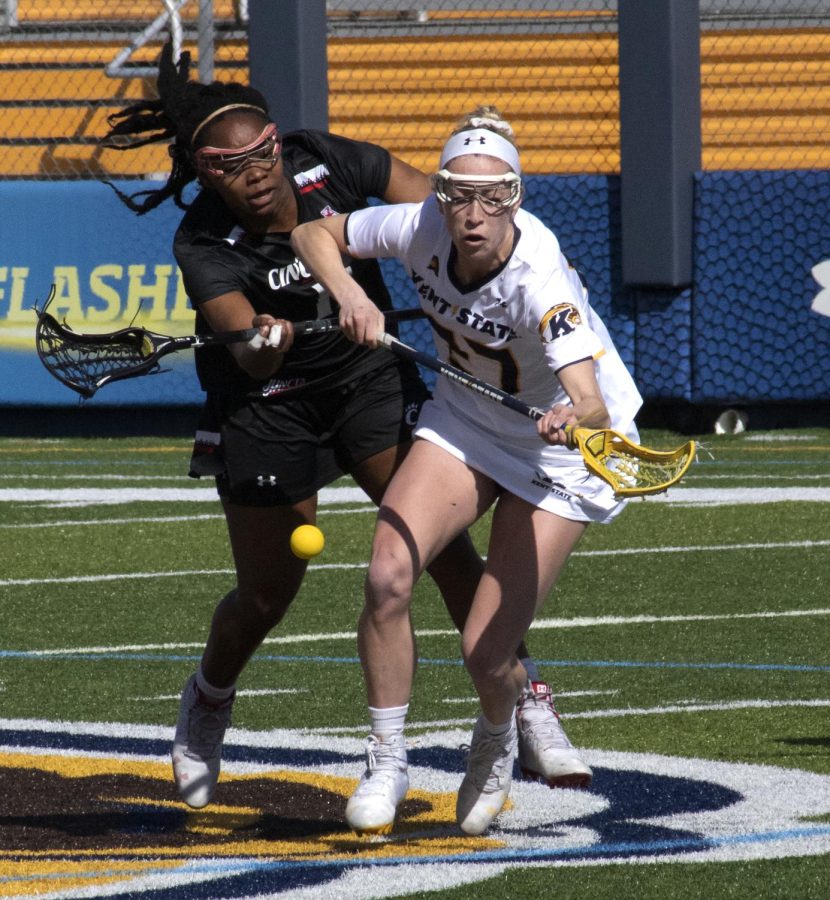 Sophomore midfielder Abby Jones [27] fights for the ball during the women’s lacrosse game on Mar. 8, 2020. Kent State University lost to University of Cincinnati 25-8.

Kent State women’s lacrosse fell to the University of Cincinnati 25-8 on Sunday afternoon at Dix Stadium. The Flashes drop to 0-5 on their sophomore season, while the Bearcats improve to a 3-4 record.

Six different players scored goals for the Flashes.  Sophomore midfielder Abby Jones led the way with three goals and three assists, bringing her total up to 13 on the season. Midfielders Meghan Cawood and Madison Rapier, along with freshman midfielder Lexi Piekarski, all had goals as well.

“It’s good to see a number of people have good days, to come in and fire things up a little bit,” coach Brianne Tierney said. “It frees up competition in practice and everybody will come back and keep competing.”

The Flashes got off to a solid start as sophomore attacker Graceyn Dean scored her second goal of the year less than three minutes into regulation, giving her team a 1-0 lead.

By the time 10 minutes had passed, the game was tied 3-3, with Kent State erasing a Bearcat 3-1 lead. However, Cincinnati outpaced the Flashes for the remainder of the contest, building a 10-goal lead over the next 11 minutes of play.

“That’s unheard of,” she said, “and that’s something we need to address and fix, by working on not fouling and putting them on the line, but also getting more saves. At least getting 50 percent of those [saves] and upping that number a little bit.”

“We have a couple of opportunities the next two weeks. … We’ve got to keep being process-focused, not result-focused, and keep getting better every day,” she said.

The Flashes will host Saint Francis University on Tuesday at Dix Stadium, starting at 3 p.m., before taking on Central Michigan Friday afternoon.

Mason Lawlor is a sports reporter. Contact him at [email protected]