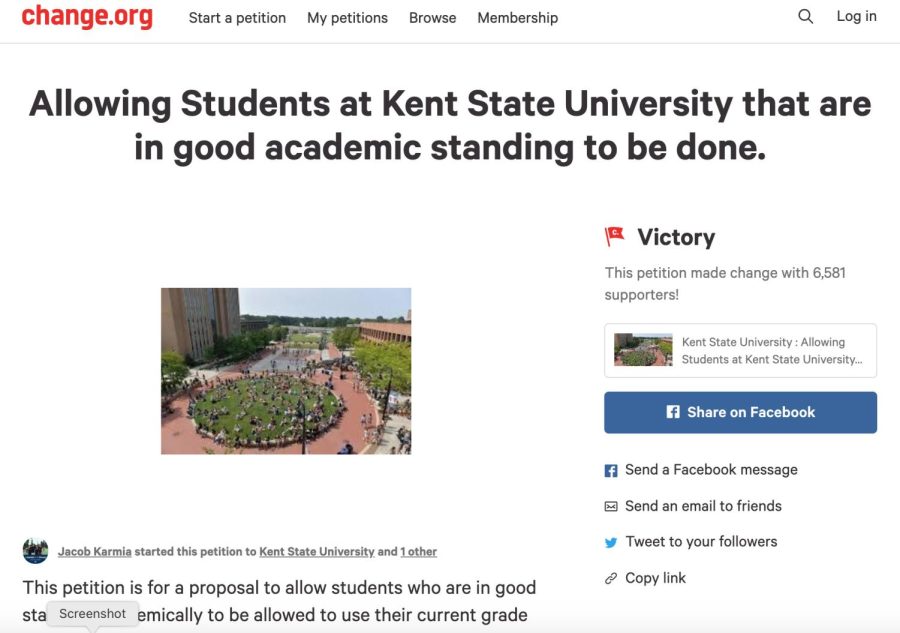 Screen capture of Kent State student Jacob Karmia's Change.org petition that asks the university to allow students in good academic standing to be done with their classes.

Kent State senior Jacob Karmia created a petition March 16 on Change.org that asked the university to allow students in good academic standing to be done with their classes for the rest of the semester.

The petition received more than 6,500 signatures. It was created in response to Kent State moving the rest of the semester online and requiring students who live on campus to evacuate by March 20 due to the coronavirus pandemic.

Shortly after the petition was created, students began to comment in agreement with the petition, giving their testimonials on the impact of ending face-to-face classes.

Nico Rushh wrote a comment that said “Letting students pass who are in good standing allows those students to focus more on their health and safety and also helps alleviate pressure on the school to make teachers switch to online to only a couple few. I would much rather stay and get my grades up and also have students who are good leave.”

Jacob Karmia, a physical education and sports performance major, said a lot of his classes are presentation and project based.

Currently he is taking a class called “Assessment and Learning,” and one of the lectures was cut short because students were supposed to teach a lesson.

“It messes up the grading scale for the class because I’m pretty sure about 10 or 20 percent of the grade was that lesson-claiming teaching, in person, the class your lesson,” Karmia said.

He said he created the petition because he couldn’t imagine how stressful it was for students who lived in the dorms, out of the state or out of the country to pack up and leave.

Karmia said he has a friend who lived in the dorms and had to go back to Germany because of the campus shutdown.

“She didn’t know how she was going to get home,” he said. “She didn’t have anyone to contact, no one to help her, and honestly, school isn’t a top priority for anyone at that time. School came second, your life came first.”

“So we did have a Zoom call and she told me what they were doing to take action,” Karmia said.

Tankersley sent out an email March 20 that said students would have the option to take their classes and pass/fail, and the withdrawal date has been extended to the end of the semester.

According to the email, “Between now and the end of the semester, you may opt to take your courses on a pass/fail basis. This includes undergraduate and graduate courses. There are some situations in which a program has a grade requirement for a prerequisite course, a program course or licensure requirement, and in such cases, the course may not be taken pass/fail.”

Students were advised that before opting to take a course pass/fail should consult with their advisor.

After Tankersley sent out the email, Karmia went to his petition to notify everyone that the petition was a success and a change had been made.

“I honestly think that with the pass/fail option, it’ll allow for those kids that are doing well to just do their work and get out of the class and allow for teachers to take away stress off his shoulders,” Karmia said.