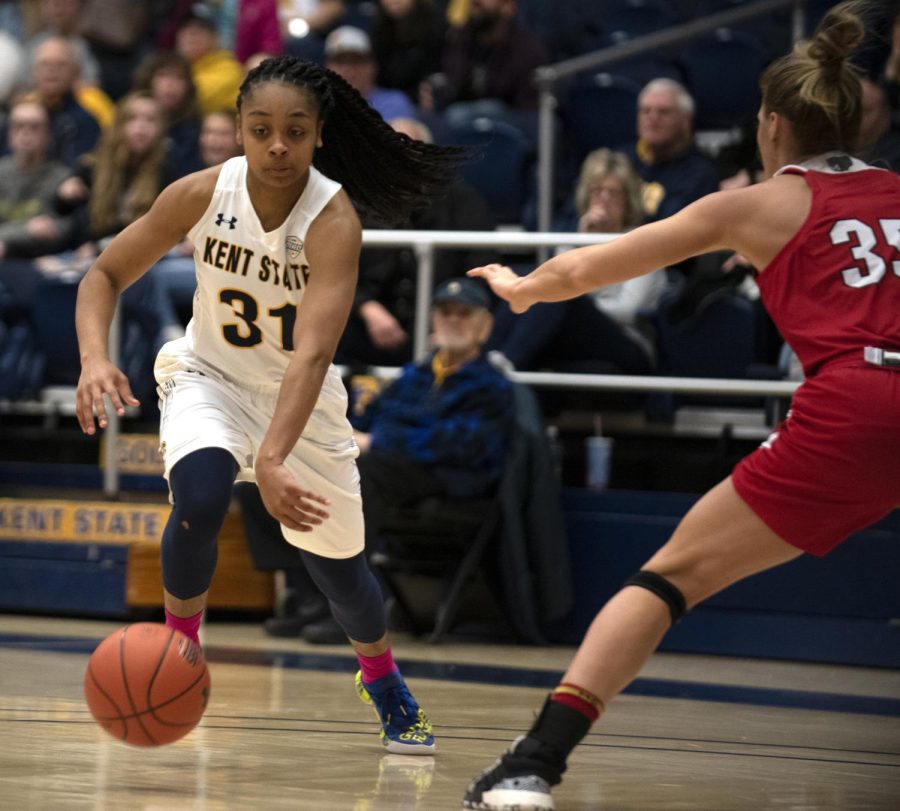 Redshirt senior guard Megan Carter’s resilience and leadership shaped her into the player she is today.

“She’s a good leader through leading by example,” sophomore forward Lindsey Thall said. “If you watch her play, she plays with a chip on her shoulder all the time, and she plays hard.”

Carter will play the last two regular season games of her college career this week against Ohio University at home and against University of Buffalo on the road before heading to the Mid-American Conference tournament next week. As of March 3rd, Kent State is tied with OU for first in the MAC East.

Carter averages 12.3 points and four rebounds per game in 22 games played with 19 starts on the season. She achieved her first double-double of her career on Feb. 22 against Miami University at home and is averaging a career high in assists with 1.8 per game.

“[I feel] a little emotion heading into my last week of the regular season, but honestly I’m just trying to focus on clinching the MAC East title and going to the tournament and doing something special,” Carter said.

On Nov. 19, 2015 against Purdue-Fort Wayne, Carter suffered an ACL tear to her right knee that sidelined her for her entire freshman season.

“Tearing my ACL for the third time would probably be my least favorite memory,” Carter said.

Her confidence grew over her years of college play, which allowed her to fit into coach Todd Starkey’s system nicely. She was able to overcome the challenge of a major injury early in her college career.

Carter’s basketball career included three ACL tears and a shoulder injury, all which required surgery, and more recently a battle with mono.

“I’m really proud of how resilient she’s been through all the stuff she’s gone through with injuries and everything else,” Starkey said. “She’s gone through a lot in her five years here, and it’s great to see a player come out on the other end of that as a success. It’s been great to see her grow in her confidence and her maturity.”

She built great relationships with her teammates and the coaching staff over the years, Starkey said. “Megan’s just easy to be around,” he said. “There’s never any drama with Megan, and you know who she is. She’s comfortable in her own skin, and I think she builds a level of confidence for everyone that’s around her.”

“She’s gotten a lot more intense as a player,” Thall said. “She knows she’s a scorer, and she’s good at doing it. So that’s what she does.”

“[Picking my favorite memory] It’s tough, but I would have to say winning the MAC East [in 2017],” Carter said.

Carter hopes to have made an impact on her teammates and the program for the future.

“I want to leave a legacy of determination,” Carter said. “If you want something, go get it.”