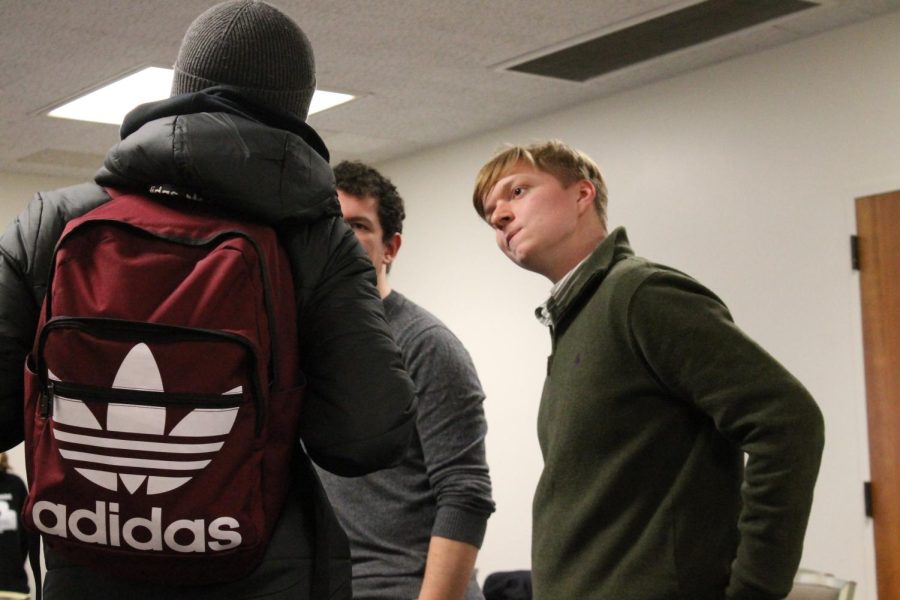 The Kent State College Democrats kept their eyes glued to the screen as election results rolled in Tuesday night.

Known as Super Tuesday, this is the day in which the most states are voting. 14 states held primaries in order to elect the Democratic Party nominee. Although five candidates were actively campaigning, the night primarily revolved around former Vice President Joe Biden and Sen. Bernie Sanders.

“It’s always nice when you get the early results and it’s cool to see the turnout in a lot of these states, which I’ve heard are record highs,” Hawkins said. “And of course, with the drama of the race, that just adds to the suspension.”

A prediction that Hawkins agreed with was Biden doing well in southern states and Sanders doing well in the west. The margin of victory in Virginia for Biden was something that stood out to him.

“When any candidate is clearing upward of 45/50 percent in a four-person, five-person field, it’s crazy,” Hawkins said. “We see that with Biden in Virginia and we also see that with Bernie in Vermont, his home state.”

Support for the candidates was divided among the room, which was a point emphasized by senior marketing major, Katie Wolfe.

“We have Bernie supporters, Biden supporters, Warren supporters. We’re all pretty equally distributed right now,” Wolfe said. “Earlier this year, we had pretty much at least one person for each candidate that was running. But now we’ve definitely consolidated.”

As the night progressed, Biden secured Tennessee and Oklahoma with Sanders winning Colorado and Utah afterward. Biden’s victories in Maine and Massachusetts prompted supporters to say, “this bounce back is real” and they stunned junior political science major, Anika Casanova.

“Maine was pretty much expected to be Bernie’s state, I mean we had talked about that before our meeting,” Casanova said.

Biden’s lead in Minnesota at the time was also noteworthy.

“Minnesota was kind of a toss-up, I didn’t expect him to take it but then again I’m not as surprised as Biden has a pretty strong following especially with more moderate democrats,” Casanova said.

The College Democrats weren’t the only ones closely watching the events unfold, as Kent State for Bernie 2020 was just as invested.

“I don’t think Bernie had as bad of a night as people in the media are saying,” Adam Schroeder, president of Kent State for Bernie 2020, said.

Sanders’ biggest moment of the night was his win in California, which has the most delegates in the country. The other delegate rich state, Texas, was narrowly won by Biden.

In the days leading up to Super Tuesday, Schroeder said the endorsement by the establishment and centrists helped Biden’s surge.

“They’re trying as hard as they can to stop him,” Schroeder said. “The Democratic base supports Bernie’s policies but they have been hammered down by the mainstream media that Bernie can’t win.”

It wasn’t a surprise to Schroeder that Biden would outperform the polls, as he acknowledged his win in South Carolina as being a turning point. Moving forward, he said Bernie needs to make the distinctions between his record on issues and Biden’s record on issues as clear as possible. He also said young voter participation will be key.

“I think we have to work harder on getting young people to go out and physically vote, because we know that young people support Bernie but they’re less likely to actually go out and vote,” Schroeder said. “That’s a problem that Bernie has always had.”

As attention is shifted towards the upcoming contests in the primary election, junior communication studies major, Tyler Gardner, said that all Democrats must stay focused.

“At the end of the day, we’re going to need to unite behind our candidate,” Gardner said, “whether that’s Biden, whether that’s Bernie, to defeat Donald Trump.”