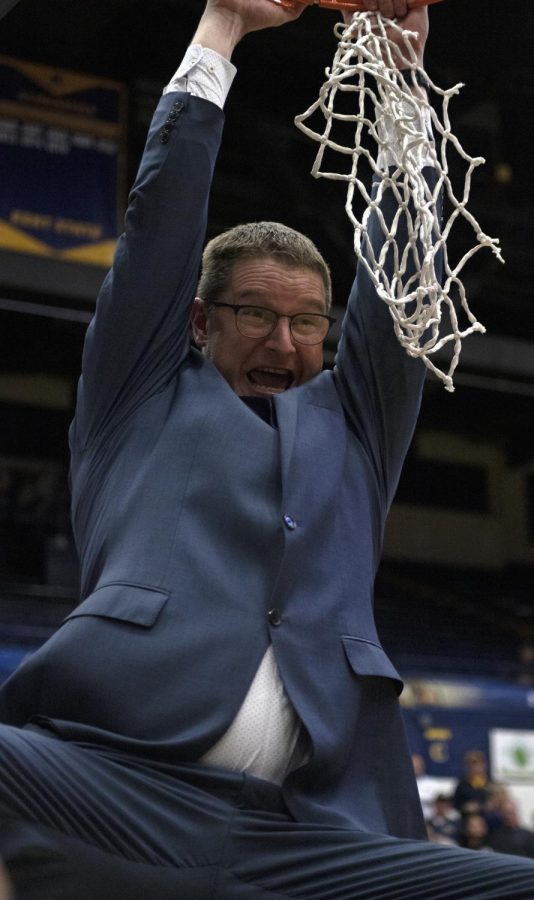 Redshirt senior guard Megan Carter climbed up the ladder beneath the basket, grabbed the scissors and cut a piece of the net down.

“I’m so happy,” Carter said. “I’m so proud of this team. A lot of people thought we weren’t going to make this run that we’ve made. We didn’t care what anybody else thought. We played Kent State basketball.”

The win clinched the Mid-American Conference East Division title for the Flashes and unofficially clinched the No. 3 seed in next week’s MAC Tournament. Kent State is now 18-10 and 11-6 in the conference. Ohio is 17-11, 10-7 MAC.

The Flashes could finish in a tie for both third and the MAC East, but the final word will come from the MAC office after Saturday’s last game against Buffalo.

“I tell our team at the beginning of every year that every season writes its own story, and this one’s had a lot of twists and turns in it,” coach Todd Starkey said. “I told them championships are hard to come by in any form, especially at this level. We’re going to celebrate this because they’ve earned it.”

Freshman guard Katie Shumate drew 11 fouls during the game, including a crucial one with five seconds to go. The Flashes had a one-point lead, and Bobcats redshirt sophomore Erica Johnson drove to the basket, colliding with Shumate. A frustrated Johnson threw the ball down and received a technical foul.

“Katie has a lot of poise for a freshman,” Starkey said. “She was getting beat off the dribble pretty good by Johnson, but when she really needed to square her shoulders and play great position defense when it mattered most, she did it right there.”

“I was just aggressive throughout the entire game and did what my team needed me to do,” Shumate said.

“We had been missing some free throws in the month of February,” Starkey said. “Hopefully we have that behind us now in March when it matters most.”

“Asiah [Dingle] drawing that foul and hitting those free throws at the end were huge.”

Dingle drove to the basket with eight seconds remaining and was fouled. She made both free throws to put Kent State ahead, 78-77.

The Flashes held the Bobcats 21.1 percent shooting in the third quarter, giving the Flashes a 62-51 lead going into the fourth.

Kent State made one field goal in the entire fourth quarter, but the team shot 16 of 22 from the free throw line.

“They were putting us on the line, and we were capitalizing on their defensive mistakes and their fouls,” Carter said.

Three players besides Shumate scored in double figures. Carter had 14 points and freshman forward Nila Blackford and sophomore guard Hannah Young each had 11. Along with her 11 points Blackford grabbed seven rebounds.

“Nila’s still coming back, so her timing is still off a little bit,” Starkey said. “She made some big rebounds for us and had some good defensive stops.”

Johnson led the way for Ohio with a game-high 36 points.

Kent State closes out the regular season at Buffalo (17-11, 8-9 MAC) at 2 p.m. Saturday and will head to Cleveland next week for the MAC Tournament.

“I’ve been to Cleveland four straight years, and I just want to get past that first round,” Carter said. “This is the year we’re going to win one and we’re going to win another one and then another and then a championship, and hopefully get a bid to the NCAA Tournament. I’m just so happy, proud of this team, and I just can’t wait to get to Cleveland.”