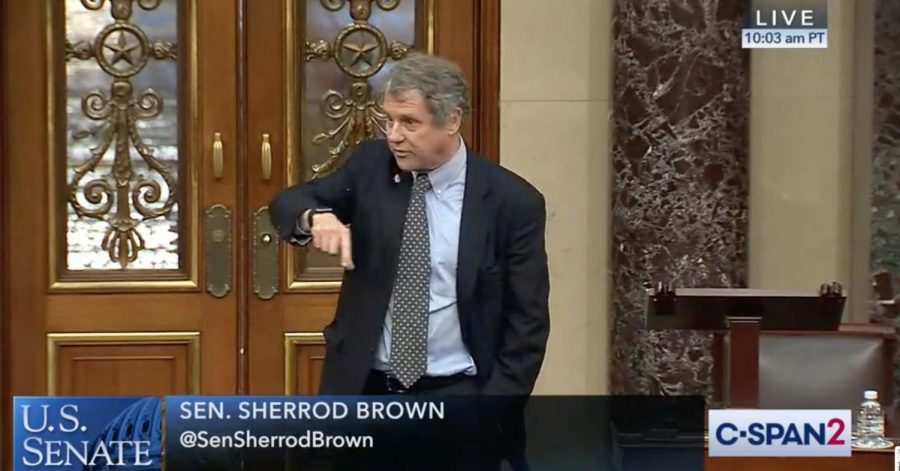 Sen. Sherrod Brown, Democrat of Ohio, speaks on the floor of the Senate in opposition to a nearly $2 trillion bailout package, which he said does not have the necessary worker protections."The fact is, we need to learn from 10 years ago," Brown said. "The same people came to us and said, 'We need this bailout.' They promised that it would help people stay in their homes. They promised that it would be money in the pockets of workers. The banks have done well. The executives have done well. But since then wages have basically remained flat."

(CNN) — For the second time in two days, Democrats voted against advancing the colossal bill to mitigate the global health and economic crises caused by the coronavirus pandemic, claiming that Congress needed to avoid the errors made during the Great Recession of 2008.

Republicans lambasted Democrats for expanding the negotiations, growing angry and frustrated with them as the stock market continued its plunge and the projections of this week’s initial jobless claims soared to the largest on record. But Democrats feared the bill was too friendly to businesses and not friendly enough for workers.

“The fact is, we need to learn from 10 years ago,” said Sen. Sherrod Brown, Democrat of Ohio, on the Senate floor. “The same people came to us and said, ‘We need this bailout.’ They promised that it would help people stay in their homes. They promised that it would be money in the pockets of workers. The banks have done well. The executives have done well. But since then wages have basically remained flat.”

Democrats are pressing for the package to give less discretion to Treasury Secretary Steven Mnuchin and more oversight on how the loans are disbursed and utilized. There are also objections to a six-month waiting period before public reporting of companies that tap into the program — something defenders say is intentional in order to prevent negative market reaction for firms that go for assistance. Yet it significantly limits the transparency attached to the program.

The Senate bill is expected to cost roughly $2 trillion dollars. The majority of that, Republicans pointed out, would not bail out corporations.

Sen. John Thune, the Republican whip, preempted Brown’s critiques on Monday, saying that about $1.2 trillion of the bill is targeted for individuals and families, health care workers and hospitals, health care providers and unemployed people.

Thune said the Democrats complaints about a $500 billion loan program for distressed companies like major airlines are unfounded because the industries are cratering through “no fault of their own.”

“Yes, there is $500 billion in here to keep the industries afloat that are failing—and they are failing by the day and shedding jobs by the day,” Thune said. “These are loans. These have to be paid back. And bailouts usually apply to somebody who did something dumb on their own, made a bad business decision.”

“This is no fault of their own,” added Thune. “They’re in trouble because they’ve been shut down.”

Democratic senators maintained their response cannot reflect the 2008 Troubled Asset Relief Program, the $700 billion bank bailout, underscoring the policy and political repercussions from that vote are still having ripple effects to this day. The policy fallout is plain — while the emergency efforts saved the financial system and, by extension, the economy, a similar scale of effort and aid wasn’t made available to average Americans, at least not without onerous rules and regulations to overcome and strings attached.

In the minds of Democrats, they largely got blamed politically for the vote, even though it was drafted and implemented under then-President George W. Bush’s administration.

“In our desire to overwhelmingly respond, which there is that desire today, there were great mistakes made,” Sen. Bob Menendez, a New Jersey Democrat, said Sunday. “We need to not only have a sense of urgency, we need to get it right.”

But there are many differences between the TARP and the loan program envisioned in the current draft of the Senate bill. By the time the bank bailout was deployed, it included significant capital infusions in exchange for senior preferred stock and warrants, in order to save financial institutions for the bad bets on mortgage securities and financial instruments that enveloped their balance sheets and threatened the fate of the global financial system. The current proposal also doles out hundreds of billions of dollars in direct payments to individuals and for loans to small businesses — something TARP did not include. And while TARP set aside billions in relief to homeowners, the program was riddled with problems.

Still, a lack of oversight — less than even the 2008 bailout program had in place, Democrats point out — has become a significant roadblock to a final deal.

Republicans have repeatedly pointed out that the loan program drafted in the current emergency relief bill is directed towards firms that are distressed due to an accelerating pandemic. The current program would be structured to provide loans or loan guarantees, and is split into tranches. A portion of the money would be designated for industries nearing collapse like air and cargo carriers. A second tranche would be dedicated to “defense critical industries.” The largest pool would be designated to serve as the basis for a Federal Reserve lending facility — money the central bank could leverage significantly higher if necessary — and be available to companies, states and localities.

The negotiations continued on Monday amid various proclamations to the press that the other party surrendered their duty in favor of scoring political points.

“Every time we hear the majority leader come out, it’s a partisan screed while I’m in my office with the secretary of treasury and the President’s congressional liaison getting things done,” said Senate Minority Leader Chuck Schumer.

After the Democrats blocked a vote Monday to advance the bill for the second time, Senate Majority Leader Mitch McConnell called their move “the most outrageous behavior I’ve seen.”

Making matters worse, the senators have also developed a sinking awareness that the longer they stay in session, the greater chance they have to be personally exposed to the coronavirus. In the past few days, Kentucky Sen. Rand Paul tested positive for it and Utah Sens. Mike Lee and Mitt Romney decided to self-quarantine as a precautionary measure.

“Yeah, it concerns me,” West Virginia Republican Sen. Shelley Moore Capito told CNN. “I mean [Paul’s] office is right next door to mine.”